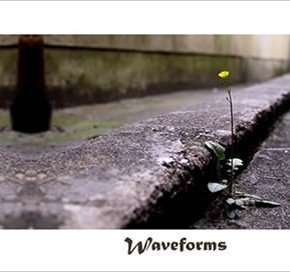 WaveForms is the name I give to my instrumental music, inspired by the work of Robert Fripp and Brian Eno – wave because it uses a sustaining guitar, a guitar synth and  looping techniques to set up gently rising and falling waves of sound.

For the listener, WaveForms is intended to set up an atmosphere of calm and even contemplation. I’ve played in churches but also in coffee bars, where the aim is simply to create a pleasant ambience, as ignorable as it is listenable.

For the player, the aim is to set up a framework within which to improvise, responding to each returning note as it arises with another note. Because each note  you play will come back to you again and again, you must be alert and ‘in the moment’. Fripp’s term for it is ‘honour necessity, honour sufficiency’ – play what’s needed and no more. For me it’s an aspiration rather than a skill, and I’m still learning.

When I play at home, the whole thing is improvised, from the random selection of the first note. For public performance I’ve ‘composed’ a few structures where I know the key, the synth and guitar voices, and the stages in which I’ll add and change elements.

All were recorded in February 2010 except Kyle, which was recorded late in 2007 for a friend whose son was missing. While intended as a message of hope it now stands as a memorial.

The influence and inspiration of Robert Fripp and Brian Eno are obvious and the album is dedicated to them.