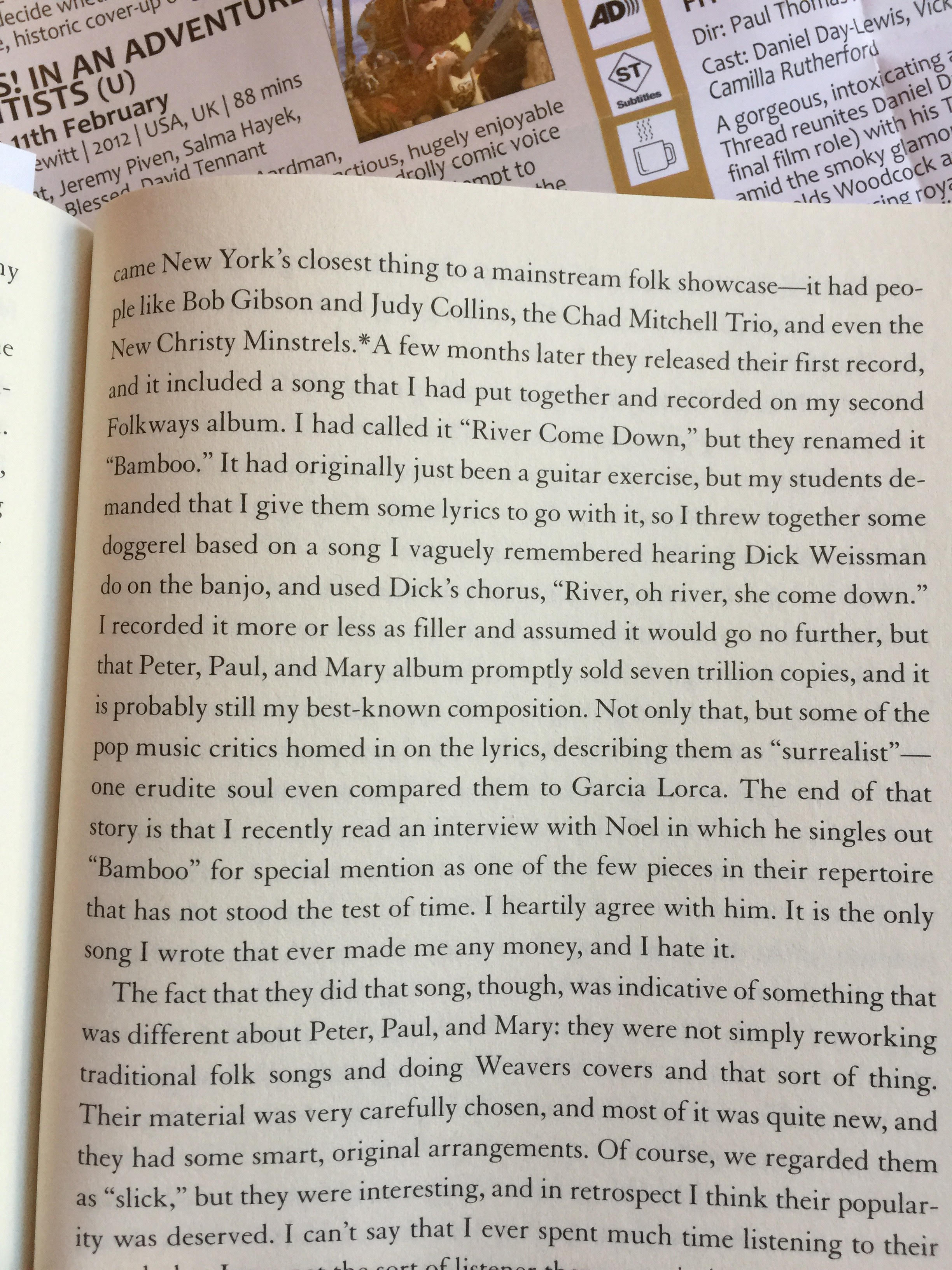 I have an ambivalent relationship to dream imagery in art. In novels, I find I’m very intolerant of it. I’ll skip whole pages if I know they’re dream sequences. Same in films. I just want to get back to ‘the truth’. In songs and poetry, however, I seem to be more willing to accept them, let them hint at something other than what they’re saying.

Bamboo – what’s it about? Who’s Hannah? I have to confess I don’t know. Turns out the author didn’t either. I first heard Bamboo done by Beth Orton on Son of Rogue’s Gallery, the second compilation of sea shanties and pirate songs produced by Hal Willner and Johnny Depp and friends. (More about Rogue’s Gallery). I assumed it was a traditional song, maybe Caribbean or African.  I found it mysterious and evocative. I hope you do too.

The truth, as researched for me by a friend, is more prosaic. Dave van Ronk, a star of the early 1960s folk boom, wrote it. Here’s what he says in his autobiography (which, incidentally, was the inspiration for the film Inside Lewyn Davis):

I had called it River Come Down but they (Peter, Paul and Mary) renamed it Bamboo. It had originally just been a guitar exercise, but my students demanded I give them some lyrics to go with it, so I threw together some doggerel based on a song I vaguely remembered Dick Weissman do on the banjo, and used Dick’s chorus ‘River oh river, she come down’. I recorded it more or less as a filler and assumed it would go no further but that Peter Paul and Mary album album promptly sold seven trillion copies and it is probably my best-known composition. … It is the only song I wrote that ever made me money, and I hate it.
(Dave van Ronk, The Mayor of MacDougal Street)

You can see more in the page photo here.

The Ballad of Bob Dylan has been my ‘greatest hit’ for many years. I wrote it way back in the 1980s – the story is here so I won’t tell it again.

The gist of the song is a shifting narrative perspective – who ‘I’ is shifts during the song, and there are multiple Bob Dylan characters, all drawn from his story, or if you like, his legend. It’s what Dylan does in Tangled Up In Blue and other songs from that period. It was written before the film I’m Not There, which features different actors playing different versions of Dylan but it’s the same idea.  Of course all this occurred to me after I’d written it.

I recorded it with my friend Dave Watson on The Wolf Who Snared The Moon, largely using the MIDI that was all we had available at the time. With this band, particularly John Lawrence on the keyboards, we started developing a new version with a slinkier opening, and had the opportunity to enjoy a day at the Sound Cafe in Penicuik with Gerry and Ross Arthur at the controls.

Fi and the band recording Bamboo

The version on PP&M’s hit album

The version I first heard – this is great!

He flew in from Miami with a bagful of bones
I was singing in the airport bar, got to pay those loans
Two sleepless eyes in an unmade face
He saw me at the bar, he said “This must be the place!”
Said he was looking for a room for the night
He said his name was Bob Dylan, I said “Ha ha, right!” He spent the night at my place on a couple of chairs
In the morning he was up and off and down the stairs
I found him in the marketplace, busking for cash
Playing my guitar in a rough and ready kind of fashion
A voice like a hangover looking for a cure
I said you sound like Bob Dylan, he said “Why sure.” Twenty miles away, high security hospital
They were looking for a guy who’d jumped the wall
They were looking in the streets they were looking in the zoo
No way of knowing what this kind of man might do
They only thing they’d got on him while he was away
Was he was into Bob Dylan in a big big way. My friend with his busking made a couple of pounds
And with a couple of mine that got a couple of rounds
We sat there reminiscing back down the line
To the sixties, how we hadn’t recognized them at the time
When this guy burst in, grabbed my friend by the sleeve And says he’s Bob Dylan – I thought Man, time to leave They got stuck into each other, I never saw the stranger’s face
Barman’s yelling at me Get these guys outta the place
Spitting out language, they were spitting out blood
It was like watching Cain and Abel, before the flood.
Got out to the street and the stranger was gone
My friend Bob Dylan just picked up his bag of bones

‘That guy there used to be a country western star
Who put down his roots and never wandered far
With his Jewish mama and five kids on the farm
It had been too damn long since he’d done any harm.
His wife cut his throat, he had to get born again
I got his job, he’s been after me since then.’ What about the bones? He said ‘I carry them with me
They remind me of a guy I knew in 63
He could have been a big shot, I told him back then
But he turned into a junkie – well I ain’t no judge of men.’
That was his tale, as the evening wore on
When I woke up in the night Bob Dylan had gone. He’d taken my guitar and my cowboy boots
My country singing tie and my country singing suit
Left me his bones, and some kinda book
It might have been a Bible, I never got time to look
‘Cause they kicked down the door, they walked in real slow
They said ‘We’re looking for Bob Dylan’ I said ‘Whaddya know?’ These days I don’t work much, guess I’m past my prime
I’m growing me a beard, that passes the time
I’m living in the country but I’ll get across the wall
When I get a better grip of my short-term recall
Some days I feel bitter, some days I feel worse
I just write another song and play it to the nurse. Norman: acoustic guitar
Fi: electric guitar
James: bass
John: keyboards
Suzy: drums
Phil Ramsay: trumpet

If you want to play it, it’s a twelve-bar blues in Am, Dm and Em.

The Ballad of Bob Dylan poster 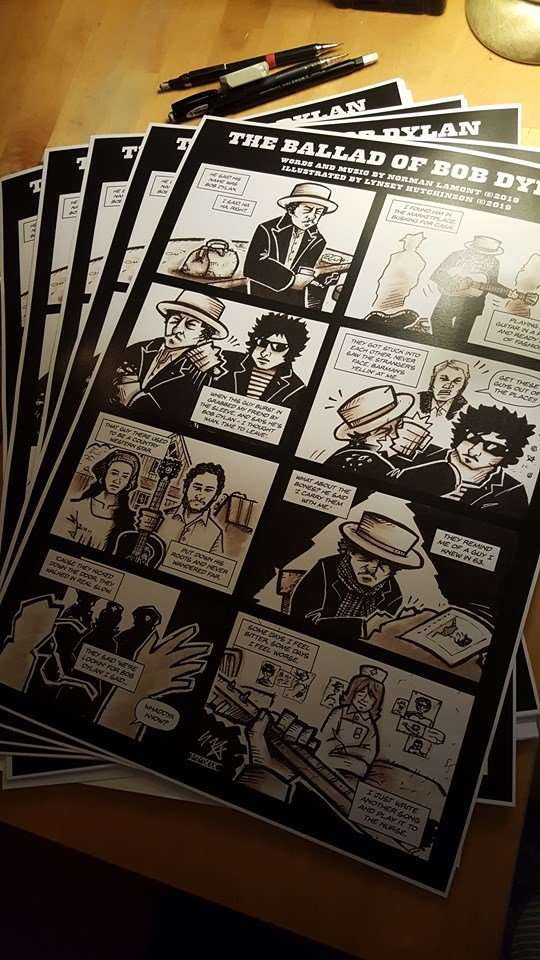