I left the Monastery after breakfast, saying goodbye to those who were still around, feeling privileged to have spent a week with these people. I felt reluctant to give it up, but it was over, and I walked, trundling my wheelie case, to the railway station. On the train, I wrote:

‘We begin from where we are.’ Work on ourselves does not mean aiming for or settling for self-acceptance. There are aspects of ourselves and our behaviour that aren’t acceptable, in terms of living with others or becoming happier in ourselves. But we do need a certain moment of self-acceptance to begin with. OK, this is what I am, this is what I do, this is the picture right now. If we don’t begin from where we are, it’s all just idealism – chasing impossible ideals from an illusory ideal starting position. We call it self-acceptance because it offers possibility: it’s not just horror, condemnation or desperation. We say OK, this is where I am, that’s what a better position would look like, what’s the first step?

Went to the new pension, more basic than the hotel I’d been staying at, but fine. After the week’s quiet I found the city a bit abrasive after only an hour, and decided to go to Montserrat. Part of the line was closed resulting in a 40-minute delay in a modest suburb. Resuming the journey I absent-mindedly got off following a German couple who were heading for the same destination. Too late we realised we’d got off a stop too early – the vertiginous cable car was closed for the winter, there was nothing else at this station, and the next train was in an hour. When it came we took a funicular railway to the complex at the top of the mountain; the views from the railway were no less astonishing than those from the cable car would have been. The complex, affluent and normally filled with tourists, was quite quiet, and I spent a few hours just wandering empty lanes and tracks. 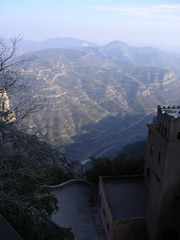 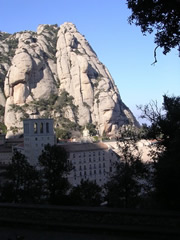 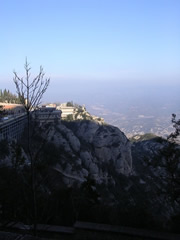 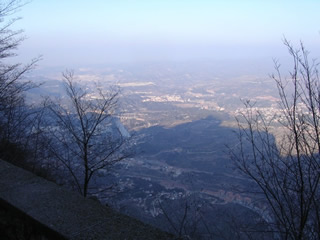 In the basilica, I looked in one of the side chapels and found painting which moved me tremendously – Mary holding the dead body of Jesus. But this is no idealised Catholic Mary, it’s a middle-aged Mediterranean woman, her face worn by work and grief, her eyes blasted with shock and incomprehension, with only the faintest glimmer of faith. The body of Jesus is undignified, white, bruised. bloodstained and broken, the mouth hanging open in a grimace. Still her hand cradles it tenderly as the body of a child. It speaks of every mother who’s lost a son to violence. The religious dimension is that she is held suspended above the landscape of Catalonia and Montserrat, in a stormy and foreboding sky. It was called ‘Pietat de Montserrat’ by Arimany (1995).

Returning to the city I went to see Sagrada Familia illuminated but was feeling very tired and picked a restaurant nearby for dinner. It was called Babilonia and served Mediterranean, North African and Arabic food. The dessert menu was a hoot, offering ‘Pace of Cake: cake of cheese and strawberries with chocolate’s whirlpools’, ‘Chuncky Monkey: of banane with pieces of chocolate and nuts’, ‘Chocolate Fudge Brownee: of chocolate with pieces of 1 authenticate brownie’ and for the children ‘Cup Simpsons: with Homero or Barth’.  This isn’t to criticise the restaurant, though, which was excellent, including the best hot bread ever.