Left the pension early, had breakfast in a commuters’ bar, and set out for my last wanderings in this wonderful city. I decided to go to La Pedrera, the famous Gaudi apartment block, but as I approached it, found myself attracted into Casa Batllo, just across the street. Although I hadn’t really prioritised visiting either, thinking I’d seen them in photos, Batllo proved the most entrancing hour or so I’d spent in the city so far. The intro to the audio guide was somewhat overstated ‘Now you will see for yourself the works of the greatest genius of all time’, but after that it settled down to drawing the attention to the largest and the tiniest details by which Gaudi brought beauty, playfulness, charm and the love of nature to this residential building. See it here. Inside it’s a lot more subtle than you might imagine, and the attic space surprised me. Pure white curved shapes, such a contrast to the colourful and decorative sense of the rest of the building, actually brought a lump to my throat. 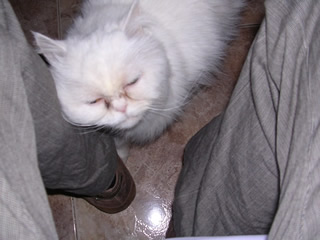 I’d hoped to have time to return to Guell Park, but didn’t, so I took the metro to the harbour area and found a small pub in which to have lunch. Returned to the pension, removing the rather senile and rasping cat from the room for the last time, and set off for the bus station, bus to Girona and a smooth flight, in the company of 162 French rugby fans, who regaled us with songs of a questionable nature back to Prestwick. I found Scotland in the grip of icy cold after the balmy spring weather of Barcelona.  Madame picked me up at Linlithgow and I was home.