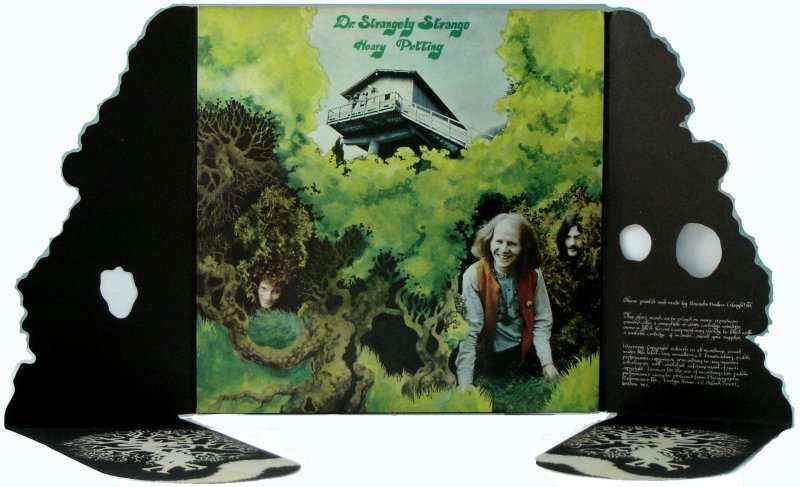 Dr Strangely Strange were an Irish psychedelic folk band between 1968 and 1971. They were friends of, and appealed to fans of, the Incredible String Band. But they approached their songs with more of a laugh. Let me introduce the Doctor …

Most people who knew Dr Strangely Strange in the 1970s heard them for the first time on the Island Records sampler Nice Enough To Eat. Sampler records were fashionable at the time, led by CBS’s The Rock Machine series: a label would pick a track from each of their top flight artists and mix them with some up-and-coming, and put it out at a budget price. In Nice Enough To Eat, the big hitters were Fairport Convention, Free, King Crimson and Jethro Tull. The up-and-coming included Mott The Hoople, Quintessence and, tucked away at the end, a song called Strangely Strange But Oddly Normal by Dr Strangely Strange.

It was an intriguing oddity, full of lyrical non-sequiturs, odd changes and a feeling that it was thrown together by a bunch of friends having a jam and a few joints. Which it may well have been.

Friends greet you on the way saying
There you go (another voice then chips in ‘There you go’)
You may wonder where you’re supposed to be going
I have often thought
Of the youngest daughter
And the joyous overflowing.

With no internet to research bands on, we had to wait until one of the music papers wrote about them to discover they were Irish (although the singer on that featured song was the English member, Ivan Pawle) and friends of the Incredible String Band. They’d been recommended to Joe Boyd of Witchseason Productions, the String Band’s manager, by Robin Williamson. Boyd saw them as ‘ISB Junior’ but thought it would be good to have another acoustic, hippy band on his roster.

The Orphanages, Lynott and Moore

The Dr Strangely Strange that Joe Boyd saw supporting Skid Row in Dublin (a rock band with Gary Moore on lead guitar and Phil Lynott on vocal) wasn’t the lineup that would eventually record their album. It featured Ivan and Tim Booth, but Tim Goulding, a classically trained pianist, only joined soon afterwards, making up what would become the core Strangelies trio. They, along with Moore and Lynott were part of a Dublin hippy scene revolving around two communal houses called the Orphanages, referenced in the Strangelies’ A Tale of Two Orphanages and a later Thin Lizzy title Shades of a Blue Orphanage.

Pawle, Goulding and Booth had distinctive voices, like Heron and Williamson in the String Band, but their songwriting styles were much closer to each other than the String Band’s two were. Over a few days recording in London Joe Boyd coaxed a set of songs from them, Kip of the Serenes, that were more casual and humorous than the String Band, but still melodically strong and poetic. The songs and the cover art by Tim Booth contain many references to Irish history and culture, none more so than the epic finale Donnybrook Fair which pulls in historical figures such as Henry Gratton and Patrick Pearse, mythical ones like Deirdre of the Sorrows and contemporaries like the Mighty Avon Showband. Like the String Band’s own 15m poetic epic Creation, which Ivan was contributing to at the same time, it ends not with a dramatic crescendo but in gentle comedy, with hymns sung first to a traditional dance tune, Waxie’s Dargle, then to a wheezing harmonium.

Because of the Witchseason connection and their friendship with the String Band, comparisons were inevitable. They answered them once: “We’re similar I suppose but where the String Band are brilliant musicians, we’re a gang of absolute duffers.” Not true.

The inclusion of Strangely Strange But Oddly Normal on Nice Enough To Eat led to good sales for Kip and lots of touring dates (carting their harmonium around in a pig trailer), but little disposable income. They decided the next album, for 1970, would aim for a bit more commercial success. To an extent following the lead of the String Band, who were beginning to appreciate the value of bass and drums underpinning the songs, in the interests of becoming more accessible to more listeners. TWith a solid rhythm track throughout, the new album Heavy Petting was more polished but still very Strangely. The standout track, Sign On My Mind, featured an exquisite guitar solo from their old friend Gary Moore.

Heavy Petting caused as much interest for its sleeve design as its music. Boyd moved them away from Island to Vertigo, a new imprint of Phillips aimed at the growing prog market. Vertigo’s albums all had a swirling spiral label on the disc, designed to be hypnotic when spinning on a turntable. The sleeve itself, by Roger Dean, was an elaborate sculpted cardboard foldout.

Despite good reviews, John Peel support and a full calendar of college gigs, the Strangelies never broke through to the point where they could make a reasonable living. Tim Goulding decided to concentrate on his painting and left the band. Ivan Pawle declined an offer to join the Incredible String Band to replace Rose Simpson, and joined the folk band run by Gaye and Terry Woods, along with Tim Booth. This lasted less than a year, after which Pawle and Booth returned to Ireland.

I was the Doctors’ companion

What’s my personal connection with Dr Strangely Strange? I never saw them in their heyday and never thought I would.

After that they played occasionally in pubs and folk clubs, reuniting occasionally, and even recording a third album Alternative Medicine in 1997. The revival of interest in the Incredible String Band during the 90s and 2000s spread to the Strangelies, who performed at a 1994 fan convention (where I got to jam with them in the evening session), and more prominently at London’s Barbican at a 2009 String Band tribute concert organised by Boyd. Their later gigs were, as expected, endearingly ramshackle, with fourth member Joe Thoma providing the musical backbone.

During one of their occasional London pub gigs their fame and charisma rubbed off on me as I had the privilege of giving my rolled-up coat to Tim Goulding to compensate for a too-low piano stool. How special that was – almost on a stardust level with the time I tripped over a drunken Mick Avory after a Kinks gig in Edinburgh!

Due to loving research and attention by curator Adrian Whittaker and Hux Records, their albums have been restored and re-released with additional tracks, and a new album Halcyon Days was made of up unreleased material from 1969 and 1970.

What will you get from the Strangelies?

It’s all in that one song, Strangely Strange But Oddly Normal. If you like the charm and randomness of that, there are treasures in store. Start with Kip of the Serenes. In particular Ship of Fools, Donnybrook Fair and Strings In The Earth And Air, an amalgam of two poems by James Joyce to a beautiful flowing chord sequence, covered by Robin Williamson and by the reformed Incredible String Band of 2002.