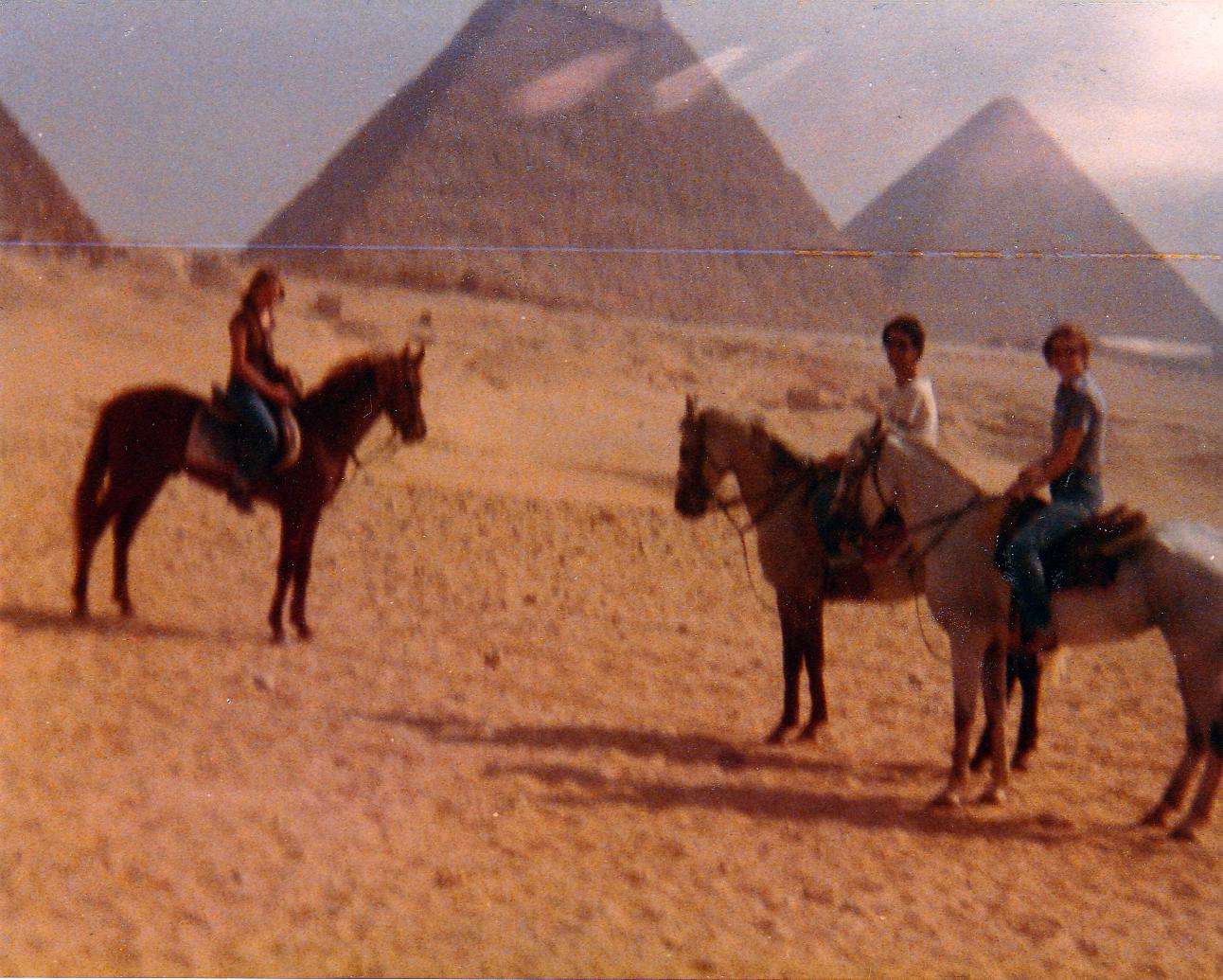 Recently I’ve been going through a lifetime of photos. I came across this one from my first stint as an English teacher in Cairo in the 1970s, and looked up the diary I kept then to find the story. This is pretty much word for word what it says:

20th May 1978
Eight o’clock in the morning we reached the Pyramids – Maud, Linda, Karen and I. The horse and camel stable staff had already been awake for hours. Nervously and clumsily I mounted my first-ever horse. As we followed the steep curved road up to the Pyramids, I felt all right when the horse was walking and pretty jolted when it started trotting and I was told to sit and stand alternately in the stirrups. I was invited to change to a smaller and quieter horse, called Itty. I revelled in sitting there, reins in one hand, as we walked past the Great Pyramid to the desert.

Between the Pyramids and Sahara City (a ‘desert experience’ restaurant) I first experienced that remarkable and exciting ‘change of gear’ from trotting to cantering. You feel the rhythmic roll of the hooves beneath you and the jolting stops. Trouble is, Itty was not at all interested in whether I wanted to go or stop. When Sultan, our guide, galloped back to the stable to get a blanket for his horse, Itty stood calm and self-possessed, waiting for Sultan, regardless of my verbal and physical exhortations. I watched the rest of my party canter into the distance as I sat helplessly waiting for Sultan’s return.

After a lemon juice at Sahara City, and my first experience of the John Wayne walk that afflicts first time riders, we set off again into a long, sandy stretch.

When we were cantering I noticed that Linda was no longer astride her horse but clinging to its side. For some reason when Itty noticed the same thing, she bolted towards Linda. Linda fell, narrowly escaping being trampled. Itty collided with Linda’s horse and I hit the sand at full speed – surprisingly gracefully I was later told. I was dragged along the soft sand, one foot in the stirrup, for a bit then abandoned, after which Itty decided it was no longer fun.

Itty stood by dispassionately and, recalling all the advice about facing your fears, I resolutely remounted. That is the advice isn’t it – get back in the saddle! She immediately bolted, changing from canter to gallop in two or three strides. I bellowed ‘Whoaaaa!’ and pulled the reins as best I could while still clinging to the saddle but to no effect. She charged on, outstripping all the others ( I think I heard a cheer from someone), heading on what seemed like a collision course for a sparse strip of palm trees. Fortunately, being a horse and not a motorbike, she swerved at the last minute to avoid it. After what seemed like an hour but was probably only a few seconds, she came to a stop.

I don’t really remember my feelings, other than fear and excitement. The others were amazed that a first time rider had managed to stay on at that rate of gallop. I don’t know either, I just know ‘I’ was gone and there was nothing but a raw pair of hands clinging to the leather of the saddle.

So by experiencing them, I had overcome three fears – riding itself, falling off, and galloping. Because they all happened on my first ride, I can be more confident about the second ride. If I had fallen but not galloped or vice versa the fear of the other would have been a great obstacle.

What I’m not so sure I can handle today is the ache in every muscle in my body this morning. John Wayne walk yesterday was OK but the Cee Threepio walk today is just ridiculous.

Well, dear reader, I’d like to say that from that experience bloomed a lifetime of horsemanship. But no. I did try it a few times in the year following this but never quite got over the fear. I haven’t got myself on a horse since 1979!

1 thought on “Fear Is A Man’s Best Friend (horses, not so much)”