It’s just coming up to a year since I heard Fritz van Helsing had died. The response to his death filled Facebook, various people’s websites and many many conversations. Although many of us hadn’t spent much time with him, he’d had a powerful and enabling impact on everyone. 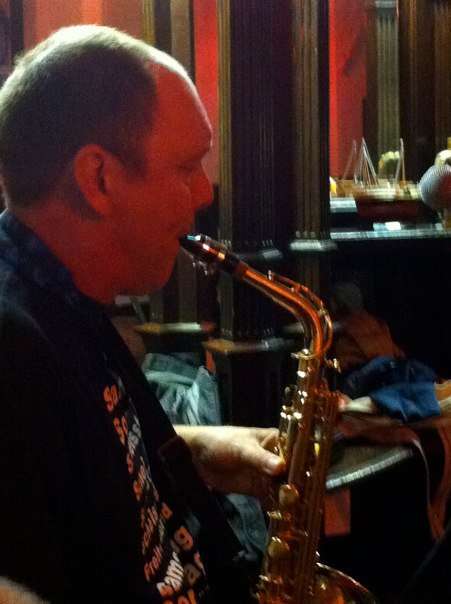 Now I hear echoes of last year as my friends on the Edinburgh music scene mourn the loss of Fraser Drummond. Fraser was a musician, but so much more. His summer garden party was a highlight of every year, as much for the garden as the party. In an unassuming Pilton back yard was a garden worthy of the Botanics. Fraser knew every plant, shrub and flower because he’d reared them himself, called them by their Latin names and talked of their likes and dislikes and the animal, bird and insect visitors they attracted. Near the end of his life he was invited to be a patron of the Botanical Gardens, and his skill was also recognised in TV appearances and by its inclusion in Scotland’s Garden Scheme. Garden enthusiasts would drop in all day during the open day, probably the one and only time they’d venture into Pilton! The Granton Garden website

But before Fraser had appeared on the Edinburgh songerwriter scene he’d spent years travelling the world.  When he first became seriously ill with cancer I worked with him to put his travel writings online, a task he completed by himself in the last year.  To see India, Egypt, Israel, Indonesia and Guatemala through his nature-loving eyes was an unexpected thrill. Fraser’s travel writing

One evening around 2002 or 2003 I was at Out of the Bedroom when a new performer was announced. I was curious as it wasn’t often I saw someone there who, like myself, wasn’t in their early 20s.  A rather humble, slightly scruffy, balding guy got up to the mic.  I felt instant sympathy!  Expectations probably weren’t high. But nobody was ready for that deep bass voice, close to the mic, rich and resonant.  I don’t think anyone who was there that night will ever forget it.

Over the years I saw Fraser play regularly with many collaborators, most notably John ‘Fingers’ Farrell, who shared his love of Americana and seemed to share a telepathic bond with him, allowing them to improvise and segue from one song to another effortlessly.  At the same time, as a solo singer he had a deep Celtic side to him, singing songs he’d written that you’d have sworn were centuries old. It was as recuperative therapy after a major operation that he took up the saxophone, to strengthen his diaphragm muscles, but it wasn’t long before he played like he was born to it,  like it was a gleaming golden embodiment of that golden voice.

Which brings us back to his garden parties, where his friends from the singer/songwriter and bluegrass scenes would gather in the kitchen, livingroom and garden swapping songs and banter.  Not many musicians – so often introverted and cliquey – had the bigness and openness of heart to draw  such a  wide web of friendship. And it wasn’t all about him – he was as good a listener as a player and would always encourage the quieter members of the circle to step up for a song. The only time you didn’t interrupt Fraser was when he got started on one social injustice or another – or just Bush and Blair.

When he was diagnosed with cancer and underwent demanding and painful treatment, he was frank and open about it from the beginning.  His wedding to Karen was brought forward and she supported him throughout with love, practical help, cajoling, and more love.  Last year they were both told that recovery wasn’t on the cards, and she then became his nurse and even, as more and more people wanted to visit and the strain told on him, his protector.  For me, like many of his friends, there was an initial trepidation about going to visit him after the certainty of death had been pronounced – what do you say, are there things you shouldn’t talk about?  Fraser knew we’d feel that, and made it clear from the outset with his own frankness and openness that there was nothing we couldn’t listen to or say.  It was strange to sit with him discussing his funeral, knowing it wouldn’t be many months away, but with Fraser you could do that.  Working with John, he put together his musical legacy into a final album, The Footsteps of Martin Eden, which signs off with The First Day, his blessing to all his friends and to the world he loved so much.

Fraser wasn’t snatched away unexpectedly. There’s no shock, no tearing of the heart. We knew, as he knew, what was coming and how it must go, and we lived with the knowledge. But for many of us, it was how he lived his last few years that brought it home to us what a great soul we’d had the privilege to know, and how much richer we are for the knowing.

Fraser’s life and works,  including the above links, are collected at fraserdrummond.com