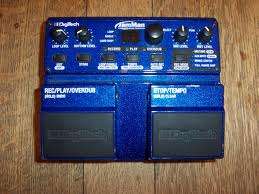 the musical experience resulting at the interstice of Robert Fripp and a small, mobile and appropriate level of technology….

The origin of Frippertronics

The origin of Frippertronics is well documented. Brian Eno introduced Fripp to the recycling delay effect of playing into a set of two tape recorders with the tape running from one to another. The note played returns again and again, slightly decayed each time, as you layer more notes on top, each one returning. The results of their first afternoon’s experimentation became the first Fripp and Eno album No Pussyfooting (1973). Fripp subsequently took the system on the road, playing non-concert venues such as building lobbies and pizzerias where the audience, having not paid money, were free to listen or ignore and Fripp was free to improvise without the audience expectation of hearing the hits of King Crimson. (The origins of the system before Fripp and Eno are recounted here )

Apart from these ‘pure’ Frippertronics performances he used the sound to beautiful effect behind songs like Peter Gabriel’s Here Comes The Flood .

… and with a sense of humour in Under Heavy Manners with David Byrne. (“I asked David to sing ‘I am resplendent in divergence’ as he would imagine a country singer would sing those words.”)

I fell in love with Frippertronics when I first heard it. I was a new guitarist and folkie when I heard No Pussyfooting, so although I loved it, it was a bewildering other world that I couldn’t conceived of playing. In 1979, however when Fripp put out the first ‘pure’ Frippertronics tracks I could hear it being built up from single notes to the enrapturing fadeouts and I began to imagine that given the right technology I might one day be able to play it.

Once I had assembled the equipment, I found my own way to play this style of music but not without months of just trying to sound like the man himself.

This involves playing only single long notes, on one instrument – either the distorted guitar tone, approximating the sound of the original Frippertronics, or a synth tone. A typical improv would involve feeding into the delay or the looper:

This is just one strategy; of course there are many things you can do while remaining within the spirit of pure Frippertronics. Short notes rather than long give a more playful effect. (The ‘beeping’ in Fripp’s original description of ‘beeping and droning’). Sometimes I pick out a note or couple of notes I like and hit the delay to On, doubling them in a higher or lower octave to emphasise them. It’s a bit like a sculptor trying to feel his way into what shape is hidden in his block.

The operation is much as above except that I’ll use a synth or strings patch at the beginning, only bringing in the distorted guitar tone to emphasise something I’ve heard in the shifting waves of sound. It can be nice to use it to lend a bit of menace to a swirl of strings. I’ve learned in doing this for years to leave as much space as possible, so keeping string notes well apart from each other in time and in pitch, using all the octaves on the guitar and the higher octave the guitar synth gives you by changing the pitch with the pedal. Too many close sounds gives you sonic mud, particularly as the sounds in the GR20 aren’t as good as those Fripp uses. Once I have a pleasing set of waves going, I’ll sometimes improvise over them in a subtle undistorted guitar voice.

This is where I’m using the techniques but not trying to emulate Fripp. I’ve created quite a few structured sequences using many more of the guitar synth voices – marimba, koto, tabla – in a set sequence and key.

So for each I have a written plan that goes, for example:

So each time I play it, it follows the sequence but sounds different – the notes, speed of playing, character are all different. It removes the need for decisionmaking about voices and loops and allows me to focus on the musicality of it. I have about eight of these sequences, each one tending to last around 7-8 minutes. Some use the Jamman, with its non-decaying loop, to set up a rhythmic base on something like marimba or tabla. The tracks Jodrell and The Necklace Smile on my Waveforms album are based on two of these structured improvs.

Here’s a video of a performance, annotated with what I’m doing at each stage.

Do I really need all this kit?

No! Fripp was playing infinite sustain on ordinary guitars for years before Sustainers were invented. He achieved it with a couple of standard pedals, classical vibrato, controlling his proximity to the amp, and – yes – hours and hours of dedicated practice. The Boss Giga Delay, or any single looper that gives you a long, decaying delay, will suffice. So I’d say the minimum kit is:

And if you don’t want to play it on guitar – play it on my site with my Waveforms Soundtoy!

More on my Waveforms

1 thought on “How to play Frippertronics (1)”