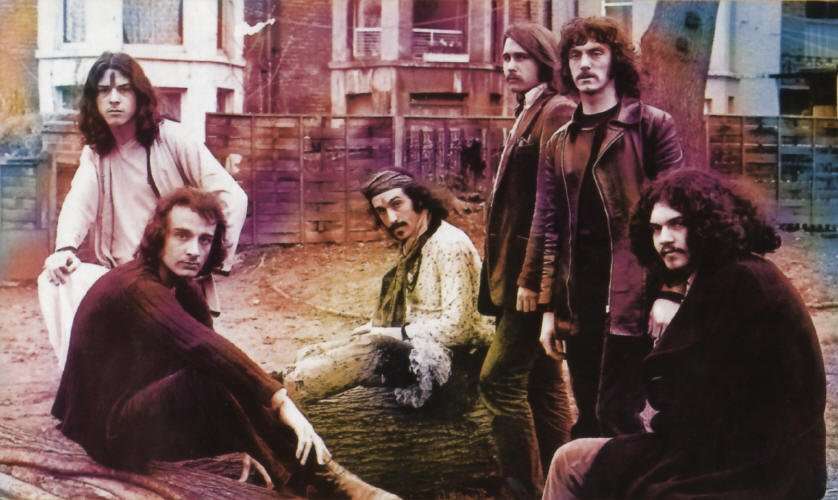 I don’t know what kind of image younger people have of the cusp of the 1960s/1970s. ‘Hippie’ has become somewhat of a disparaging term, if not a parody. Bummer, maaaan! In South West Scotland and Glasgow, there weren’t many people floating around talking about bliss and sitting at the feet of their guru. Billy Connolly once remarked that these people came out for Incredible String Band concerts but he had no idea where they went the rest of the year.

Nobody, not even the psychedelic bands like Hawkwind, really resembled the spaced-out hippy of a thousand cartoons. Even the String Band were drug-free and all efficiency by then. That was Scotland. Our hippies tended towards denim, Neil Young and The Band, and they were soon to give way to Bowie and Roxy Music.

But scroll down to London, and zoom in on Ladbroke Grove, follow the scent of incense and you’d find Quintessence. In appearance at least these were the hippies – robes, cheesecloth, flowers, names like Raja Ram and Maha Dev. Musically they were somewhere between the Grateful Dead and Within You, Without You. Their live gigs were free-flowing rock-jazz jams, settling into chants for a bit and sometimes touching on the short, tightly-arranged almost Motown songs that fans knew from their albums. They had a singer with a Big Voice, a highly skilled jazz flautist and a lead guitarist capable of holding a tripped-out audience’s attention for long spells of head-banging and hand-waving. They were Quintessence.

Sitting at the lotus feet of the guru

Many bands between 1968 and 1970 found it commercially expedient to pay lip service to Indian music and even Indian spirituality. They would incorporate a drone or a sitar instead of guitar for one track, or maybe plunder the gaudy pantheons of Hinduism for artwork. In short, they were tourists. Quintessence were the real thing. They were formed when two Australians and an Englishman met at the London ashram of the guru they’d elected to follow, Swami Ambikananda. They decided to celebrate their faith in music. Singer Phil Jones and flautist Ron Rothfield used the names Swamiji had given them – Shiva and Raja Ram. With bassist Sambhu they put an ad in the Melody Maker for jazz-rock musicians. A key criterion was that they should live in the Ladbroke Grove area. 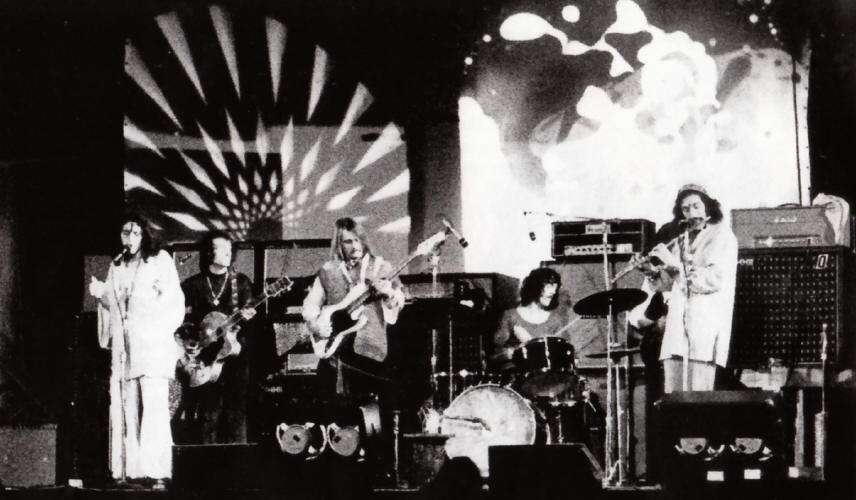 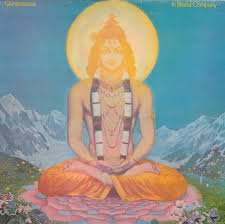 They soon established a full calendar of gigs. While their marketing may have looked esoteric and introspective, their gigs were hi-energy, with Shiva and Raja Ram whipping up dancing and chants between the increasingly intense guitar and flute solos.  They were quickly signed to Island records, and the studio gave them freedom to explore a gentler, more lyrical – and more Indian – approach.  The jams were pared back to tightly-arranged songs.

The first album In Blissful Company held its message in its title: on one level it was the company of the gods, as depicted on the front cover. On another, the many photos of the band at their ashram and with friends in Ladbroke Grove spoke of the sense of community and shared lifestyle around the band, eulogised in the song Notting Hill Gate.

In Blissful Company ran up the highest printing bill Island had paid for an album, until its 1970 followup, Quintessence, with its beautiful triptych split gatefold.

Try some, buy some

For many Island bands, the record company’s classic sampler albums were the key to a wider audience. Nice Enough To Eat featured Gungamai, a loping rocker reminiscent of The Doors. In 1970 Bumpers, a double-album sampler, featured Jesus, Buddha, Moses, Gauranga, a highly catchy, concise and commercial track that was almost Motown in its no-nonsense approach and would become their most popular song. Curiously, one pressing of Bumpers used a live version of the song, the other the studio version from Quintessence.

By the time I heard Quintessence I was already a fan of any manifestation of Indian influence in rock. My Sgt Pepper sessions tended by now to reach to the end of Within You Without You, lift the needle and play it again. I couldn’t quite grasp the rhythms or scales of Indian music – I didn’t have the musical vocabulary – but I knew there was something exquisite there and if I listened to enough I would get it. The Moody Blues In Search of the Lost Chord and the early Incredible String Band albums all featured sitar but it tended to be played like a different kind of guitar. I was more captivated by the full-on Indian approach of Within You Without You (I’ve since learned there was more Harrison than India in it than I thought) and Spirit Beautiful on Mike Heron’s solo album. So with Quintessence it was the Indian-sounding pieces like Shiva’s Chant and High on Mount Kailash that I kept coming back to. The latter was the sole surviving track from an early attempt by the band to record an opera with Indian and Tibetan musicians.

I saw Quintessence once, in Glasgow. I enjoyed the groove but was a bit disappointed that there was nothing I recognised and nothing particularly Indian. They went off and came back for an encore. People were shouting for songs like Gungamai. Shiva stood at the mic and with a serious face said something like ‘We’d like to do a Chinese chant called Chin’. Immediately they crashed into a stunning version of Jesus, Buddha, Moses, Gauranga.

Quintessence were one of the first bands to play the Glastonbury festival. The story is best told by Colin H at the site theafterword.co.uk:

A little bit of history was made in September when Quintessence, caught by a passing BBC new crew, opened a little festival, the very first, for a diary farmer in the Glastonbury area called Michael Eavis. The main attraction had originally been the Kinks, but Eavis gave a guileless interview to the Melody Maker which resulted in the headline ‘Kinks For Mini Festival’. As he later recalled: ‘The Kinks probably read that and thought it sounded a bit low rent for them. Next thing, I received a letter from their management with medical certificates saying that all four of them had laryngitis. That’s quite improbable, isn’t it?’

The Kinks’ agent nevertheless offered him (Phil’s Blenheim Crescent neighbour) Marc Bolan for the same money: £500. No doubt he saw Eavis as a gift, for Bolan was as yet still warbling in the wilderness. Quintessence and everyone else on the bill made do with £15 each. Around 1500 people turned up to this laid-back proto-‘Glastonbury’. A year on, in the event immortalised on film as Glastonbury Fayre, it would be around 12,000, and once again Quintessence would be playing.

They would return to Glastonbury 40 years later, as we’ll see.

In 1971 they released their third album, Dive Deep. It had a more commercial focus and as their crowds increased, it looked like Quintessence were heading for the big time. Chris Blackwell of Island set up an American record deal, and a debut gig at Carnegie Hall. Jim Morrison of the Doors was already a fan. However the band rejected the deal on financial grounds, except for Shiva and Maha Dev, who were keen to do it; this set up a tension that would ultimately split the band. A fourth album Self had tight, commercial songs on one side and a live performance on the other.

They were still a success on the college circuit in the UK, even boasting Roxy Music as a support act at one venue. They tried to boost this success with singles and a short tour of gigs in cathedrals. But in 1972 the tensions must have been too much and Raja Ram sacked Shiva and Maha Dev, as well as the band’s management. Quintessence lost its momentum. A final album, Indweller, lacked the power of Shiva’s voice. Shiva and Maha Dev recorded their own album as Kala, but it fizzled out.

Shiva moved to America where he pulled together his spiritual direction, his Australian heritage and and an interest in sound therapy. He has released several didgeridoo and chant albums under the name Phil Jones. Raja Ram developed his own career as an electronic musician and DJ, in the genre of psychedelic trance, notably with The Infinity Project and Shpongle. He has played flute with Youth, Boy George and Sly & Robbie.

Various lineups of Quintessence continued into the 2000s. In 2010 Maha Dev ’s Quintessence were booked to play at Glastonbury’s 40th anniversary. Shiva was invited to the event and joined them for a well-received reunion performance. BBC Yorkshire made a short fly-on-the-wall documentary about the reunion, with fascinating moments such as the current Quintessence singer understandably upset at having to give way to Shiva after looking forward to the gig for months. It must have ended OK as we see them singing together at the final performance.

Other inspirations on this site