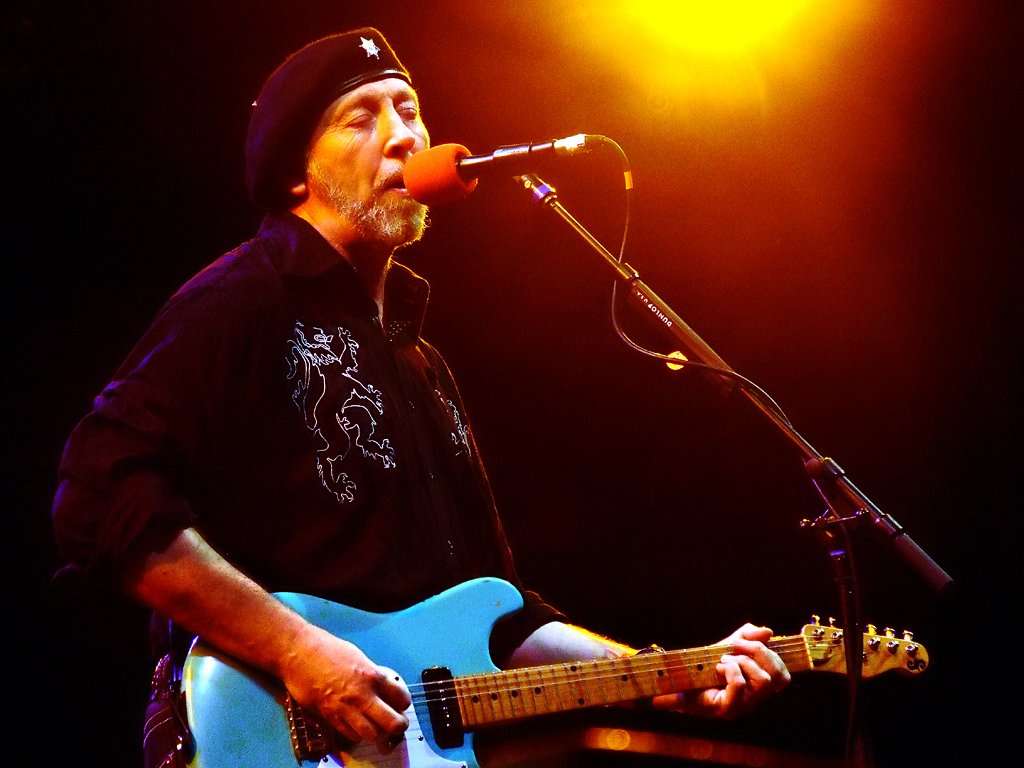 Doom and Gloom from the Tomb was the title of a Richard Thompson compilation of unreleased material issued on cassette in 1985  It’s a phrase that’s stayed with him over the years. Few songwriters have plumbed the depths of sadness, anger, resentment and hatred with such a direct and unsentimental vision as Richard Thompson.

He emerged from Island Records folk-rock darlings Fairport Convention as a guitar prodigy but one with a difference. His style was unlike the blues-based riffing of virtually every other lead guitarist at the time. It was both droney and twangy, percussive and yearning, based more on the bagpipe and accordion tunes he learned from his Scottish father. While his peers would call out American bluesmen or jazz guitarists as their influence, Thompson pointed to Scottish accordionist Jimmy Shand.

Guitar style: a bunch of wires over a plank of wood

There were two main factors in his guitar style – his use of hybrid picking, where he held a plectrum with his thumb and index finger, but used the other fingers to pick, often over an open string struck by the plectrum. The other was his minimal use of effects. His Stratocaster sounded like a Stratocaster. In one interview he said he liked a guitar to sound like a bunch of wires over a plank of wood. In trying to describe his guitar on a track I was reviewing one time, I said it was the nearest musical equivalent to a prickly gorse bush.

But, as we were to see, his guitar skill was only part of the story, probably the lesser part. In 1972 he released Henry The Human Fly, his first album of self-penned songs, slated by critics for its relentless misery and ignored by the public. He saw more success, within a fairly limited folk-rock audience, with the albums he released with his new wife Linda, beginning with I Want To See The Bright Lights Tonight. No less bleak in outlook but with Linda’s commanding voice to draw the ear, they began to build a loyal fanbase and to tour.

I saw them a few times in those days. They were a far cry from the entertaining Richard Thompson presentation of today. The first gig was a support slot on a Traffic tour. They both looked and sounded terrified, tiny stick figures on a huge stage. Linda made a few attempts to speak to the audience, Richard just stood in the background, his mop of hair over his face. When their first headline tour came to Glasgow City Hall not long after, there was a little more communication – Richard talking unexpectedly about his love of country music, not the coolest thing at the time – but the overall impression was of a couple who hated the limelight and possibly hated being there at all. Both these performances were acoustic. Thompson had given up the use of the electric guitar.

This was largely due to his conversion to Islam. But this wasn’t the joyless anti-life version of Islam we’re often presented with in today’s media. The Thompsons embraced the Sufi path, a meditative and mystical path seeking direct knowledge and experience of God, uses ecstatic dancing and chanting. Its most famous exponent, the 13th century Persian poet Jalalud’din Rumi, talked of love, lovers, and drunkenness as metaphors for religious worship and absorption. That Thompson was following in Rumi’s foosteps was evident in his songs, particularly in the album Pour Down Like Silver, where each song can be interpreted as a straight love song, or as a hymn. Not only love but the hostility of society to their faith.

Who looks out with my eyes? What is the soul? I cannot stop asking. If I could taste one sip of an answer, I could break out of this prison for drunks. I didn’t come here of my own accord, and I can’t leave that way. Whoever brought me here, will have to take me home.
(Rumi. This was later paraphrased by Thompson in A Bird In God’s Garden)

For a while they walked away from their music career, living first in a Sufi commune then trying to start an antique shop; they still put out albums but sales declined and their contract was dropped. The story of the breakup of their marriage, their ‘US tour from hell’ supporting the Shoot Out The Lights album, and Richard’s re-emergence as a solo performer and electric guitarist has been told many times, sometimes by Linda, so I won’t reiterate it here.

Today Richard Thompson lives in Santa Monica, but tours the UK and USA frequently, alternating band setups with solo performances where he can create pin-drop silence or gales of laughter. His themes haven’t changed since the 1970s, a grim Ken Loach world of broken hearts, drunken fights and poverty, but his vocal delivery has become powerful and versatile and his guitar playing astonishing, both on electric and acoustic. He shares tips regularly on tutorials (see the playlist below) and even residential camps, and his self-deprecating humour makes a Richard Thompson evening thoroughly engaging.

“As a songwriter, I think what you are aiming for is slightly to discomfort the audience, to get just below the normal consciousness at the things that are not quite talked about. To the feelings that the audience doesn’t know it has yet…” Richard Thompson interview

What have I taken from Richard Thompson?

My pick of Richard Thompson

With over four decades of Richard Thompson to choose from, and very few lapses in quality over the whole period, it’s hard to pick a few tracks. These are the ones I keep coming back to.

Finally, if you’re curious, a few songs of mine with a thematic link, trying to express that spiritual side of life