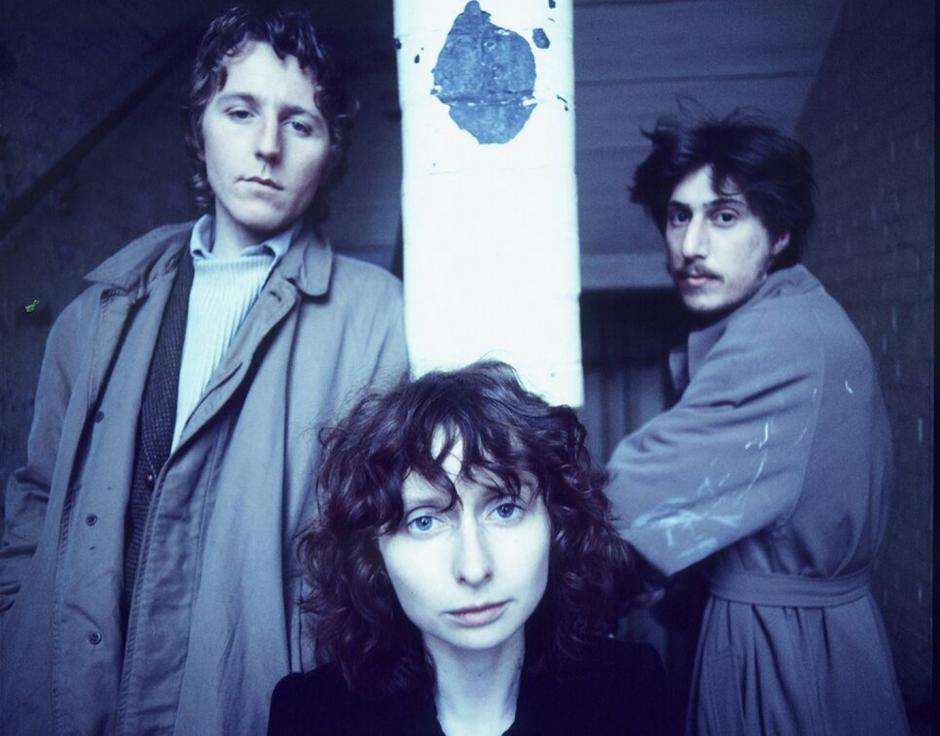 Slapp Happy, and their songwriters Peter Blegvad and Anthony Moore, have produced some of the strangest pop music of the recent decades, with high philosophical overtones yet all instantly accessible.

In 1974 I was reading a music paper, probably the NME, and came across a review of an album by someone called Slapp Happy. The reviewer described it as eclectic, melodic and poetic, but also ‘playful in the spirit of the Incredible String Band’. I was always on the lookout for anyone that might give me the inspiration the String Band gave me. I’d already bought John Cale’s Paris 1919 unheard, on the strength of his collaboration with Mike Heron, and loved it immediately so I took a punt on Slapp Happy. 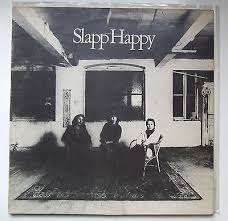 The opening bars, with Graham Preskett’s surging violin, hooked me in. There was little outward resemblance to the String Band. It didn’t have any folk references. It was somewhere between pop and cabaret, with Dagmar Krause’s slightly accented singing and the highly articulate lyrics of Peter Blegvad and Anthony Moore. The lyrics came in a lovely little booklet. On first hearing some of the songs felt a bit bland and smooth but there was always something that would jar enough to be interesting, whether it was growled vocal interjections from Blegvad or Moore, or odd lyrical conceits.

Hey, I think I’ll write a haiku
Hey, you know as well as I do
You’ve got to, got to, have a high IQ
Eat this, and have a cup of tea.

I was unaware this was their third bite at the cherry, having recorded two albums in Germany previously. The second, Casablanca Moon, was essentially the same songs with less polished arrangements. It was re-released in 1980 as Acnalbasac Noom. They’d been picked up by Virgin, then a new star in the record label world, who spotted their potential, and Slapp Happy became one of their early successes.

Slapp Happy didn’t last long in this format. They merged for two albums with avant-jazz labelmates Henry Cow, a politically committed Communist band. The pop elements of Slapp Happy seemed to be submerged in what was, to me at least, quite difficult music to like (and I tried). By 1975 Blegvad and Moore left and Krause stayed with Henry Cow.

They pursued solo careers, Krause making a name for herself as an interpreter of Brecht and Weil, while Blegvad and Moore released a series of solo albums, two of which I’d number among my all-time favourites.

Moore’s Flying Doesn’t Help, released in 1979 under the name of A.More in an almost information-free sleeve, was rough and post-punk, with a glorious wit and instantly accessible songs. Moore went on to become Principal of the Academy of Media Arts in Cologne.

Blegvad’s Knights Like This in 1985 had one of the best title-graphic puns ever. This is just one of a series of albums and collaborations that have seen Blegvad work with Loudon Wainwright, Robyn Hitchcock, Andy Partridge and others from the ‘research and development’ division of rock.

Blegvad created a long-running surreal comic strip Leviathan for the Independent on Sunday in the 1990s, where an intellectually curious but innocent baby, Levi, explores the world with the aid of his cat. 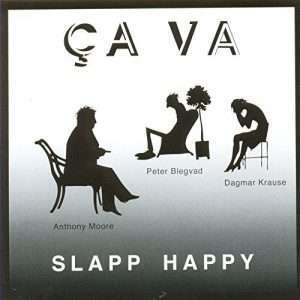 In 1997 Slapp Happy reunited for a new album Ça Va.

This has become one of my favourite albums, one I can always return to and hear something fresh. Blegvad and Moore play everything, filling out the rhythm section with the skilful use of drum loops, Dagmar’s voice deeper and more mysterious than ever. The first few tracks starting with Scarred for Life are intriguing but from the fifth song, King of Straw through to the tenth, Working at the Ministry, it really hits its stride with one killer punch after another.  The lyrics are more literary than rock’n’roll, but served up atop hooky melodies and and a fascinating range of sounds.

One man insulates his heart and
Hopes to make himself a shelter.
Storms may blow his house apart
But he’s still got cover.
He’ll never be available or vulnerable
Enough to ever be her lover.

Powerful stuff, powerful stuff,
The lady says it’s not enough.
A hundred proof’s for powder puffs,
Takes more than that to get a lady off.
He gets tender, she gets tough,
Tears his head off in a huff…

One man wanders in a wood and
Comes upon a lonely tower.
He huffs and puffs and blows it down
To demonstrate his power.

If you want to hear them at their best, start with Ça Va.

A further treat for Slapp-starved fans (Slappies?) was a live album from a brief tour of Japan by the trio in 2001. They gave a set of songs from their back catalogue a stripped-down, intimate treatment of keyboard, guitar and vocal, captured in the album Live In Japan.

While researching that I discovered they’d played in Japan again this year (2017) and some of it’s on YouTube.

Slapp Happy, Momus, John Cale, Patti Smith stand as proof that rock can still be literate and even intellectual without losing being po-faced and exclusive.