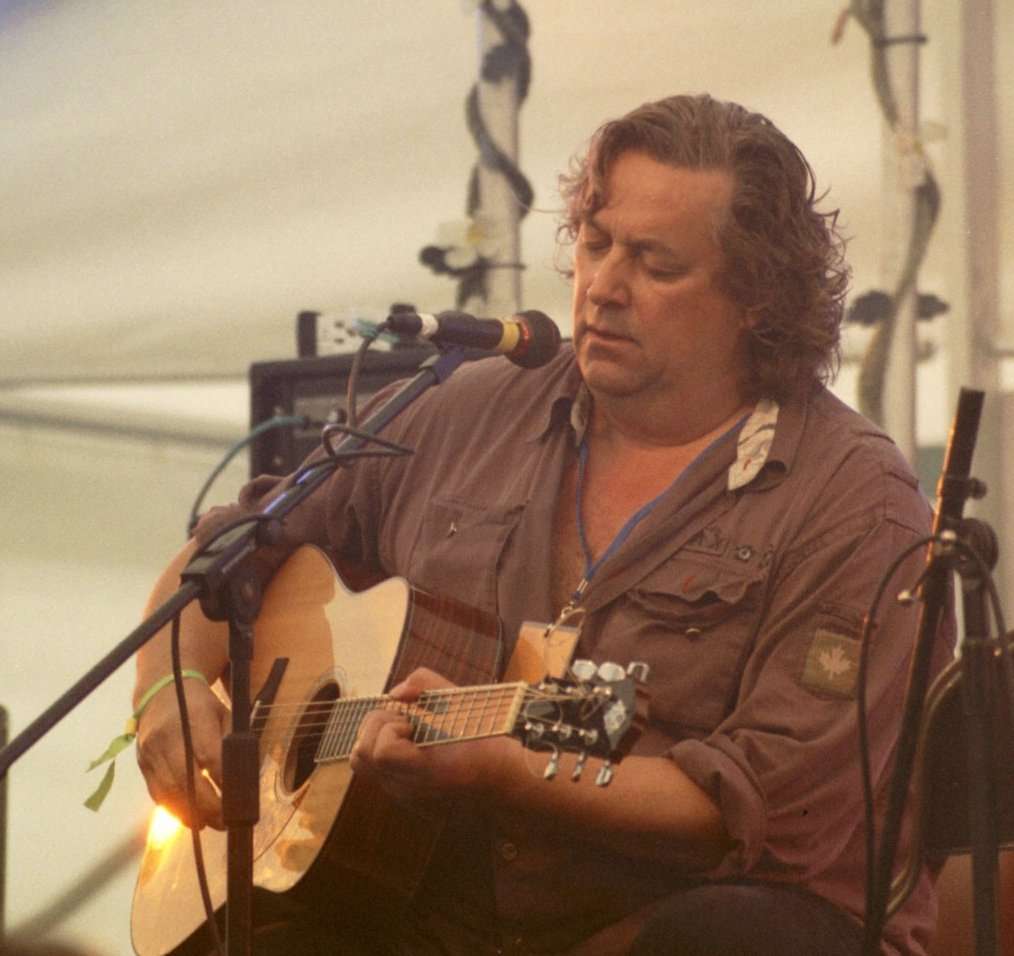 Remember how you discovered new music before the internet? There was radio, the occasional TV programme and the music press. Sometimes you’d hear something and decide you wanted to buy it (so you could hear it whenever you want) and sometimes you’d take a chance and buy something without hearing it because of a writeup in the music press. Feels like a glimpse of a parallel universe, doesn’t it? This was how I discovered Jackie Leven – twice!

In 1981 I bought a single Main Travelled Roads by Doll By Doll, on the strength of a music press review. I’d never heard the band and what I’d read about them was intriguing but sounded a bit outside my comfort zone. But the review promised an epic, sweeping ballad delivered by a rich baritone voice and the single delivered. I didn’t buy anything else by the band, but it became one of my favourite songs. It borrowed the melody from Johnny Mathis’s Twelfth of Never (of which more later) but the lyric spoke of myth and archetype, concluding with “Eternal is the warrior who finds beauty in his wounds.”

In 1994 I read that Jackie Leven, the singer of Doll By Doll, had returned to the fray with an EP called Songs from the Argyll Cycle. Again, I decided to take a chance on it, unheard. Again I loved it, in fact it’s still one of my favourite recordings. After that came 27 commercial albums and 12 fan-club albums! He gigged constantly, mostly solo, from 1994 till his death in 2011.

Back in the 90s I’d written a song inspired by Main Travelled Roads. I sent a cassette to Leven and promptly received a handwritten letter back. (The song’s available later in this post alongside Roads)

the two songs have movement in common and both have an attempt at emotional honesty which refreshes (eh?) …

keep up the good work

But it was between those years 1981 and 1994 the remarkable back-story of Jackie Leven, the foundation for the albums and live performances, was built.

Doll By Doll were described as ‘sonic terrorists’ – they performed mostly in the UK, gigs fuelled by an uncompromising (and, it has to be said, unpopular) mix of psychedelia and aggression.

Neil McCormick of the Telegraph describes them:

Utterly out of time amid the post-punk fires and new-wave angles of the late 1970s, [their second album Gypsy Blood] came out on a small label, Automatic, to good reviews and meagre sales. Doll By Doll did not much help their own case with their belligerent, challenging attitude to audiences and critics. They could be a quite terrifying group, a swaggering bunch of hard-drinking, drug-taking, borderline psychotics in their late twenties who revelled in their otherness. They had a cult following, but made many enemies. When their masterpiece flopped, the band shifted labels before eventually breaking up.

Despite Pink Floyd’s David Gilmour guesting on their final album Grand Passion, they called it a day in 1983.

Shortly after this Leven was the victim of a random street attack in which he was nearly killed. His throat was damaged and he was unable to speak for two years. This left him in the hopeless back streets of poverty, depression and heroin addiction.

It took a few years, but he pulled himself out of addiction with the help of various therapies and techniques. With little prospect of singing again, he and his new partner, Carol Wolf, also a recovering addict, pulled together an organisation, the Core Trust (now WDP ), to help others in the same position. The Core Trust gained the interest and support of Princess Diana. Leven gave her the credit for getting him singing again.

Before you hear the story, something about Leven as a storyteller. Half of the pleasure of Leven’s gigs were his stories. Told in the style of a bemused raconteur – ‘You’re never gonna believe this, but it really happened’ – he seemed to have an endless supply of anecdotes, so good they became listed as tracks on his many fan-club albums alongside the songs. I’ve heard various versions of his Diana story, so it probably grew in the telling, but here’s the best version I’ve heard. The beginning is missing – it takes place backstage at a charity event, the characters being Leven, the Princess and Wayne Sleep:

In another telling, the song he sang wasn’t Main Travelled Roads but The Bonnie Earl o’Moray, the traditional song on whose melody both Leven’s song and Twelfth of Never were based.

Whether goaded by Diana or not, in 1994 he started the solo career that would guide the rest of his life. It started with Songs from the Argyll Cycle, an EP of songs inspired by Carol Wolf leaving him (for the Dalai Lama’s bodyguard, according to the sleevenotes). The standout track is Call Mother A Lonely Field, which would become a fan favourite, but the big surprise was a stunning version of I Say A Little Prayer, sung without irony from a woman’s viewpoint by a deep male voice. The EP was a trailer for his first album.

The album that followed, The Mystery of Love Is Greater Than the Mystery of Death, set the pattern. Albums that mixed songs and spoken poetry, in exquisite artwork, with intriguing titles:

At the start of his career Leven was inspired by the poet Robert Bly and his ideas of maleness and the rites of passage to adulthood lost to males in the modern world.

Bly … sees today’s men as half-adults, trapped between boyhood and maturity, in a state where they find it hard to become responsible in their work as well as leaders in their communities. Eventually they might become weak or absent fathers themselves which will lead this behaviour to be passed down to their children. (Robert Bly Wikipedia page)

“There is a lot of shit talked about it, as with anything else” says Leven in his Fife burr. “What I like is its common sense. You don’t get many New Men in this work. It’s absolutely non-guru. Bly’s thing is, ‘It takes the lover to get into a relationship, but the warrior to stay in it.’ There will always be guys that it’s not right for. It’s not like feminism where you’re trying to get every bastard to do it. If you’re happy just trying to keep your boyish charm together, then fine. But if you’re interested in moving from boyhood to manhood then it’s fascinating work.
(Jackie Leven interviewed by Paul du Noyer)”

Bly was the first of many poets to contribute to Leven’s albums. Sometimes I found the quality of the poets’ contributions overshadowed Leven’s own lyrics, which occasionally appeared strained alongside.

Every Jackie Leven gig began with a flurry of bluesy improvisation, as he settled into his guitar. He used a unique tuning, which, as far as I can find, was used by no-one else, and has no associated tab or chords online.

It gives a beautiful wide resonance. Any chords will have to be gleaned from in-concert videos like this:

Ian Rankin, author of the celebrated John Rebus books, and Jackie Leven had a mutual admiration. Rankin says this was based on their subject matter: “Men who can’t show their emotions, men who make mistakes, men who screw up. He might put it more forcefully”.

Rankin made Rebus a Jackie Leven fan, and used Leven’s lyrics here and there throughout his work.

In 2005 they put out a double album together Jackie Leven Said, comprising a short story read by Rankin, and a recording of a live show at the 2004 Edinburgh Festival. Mixing songs and discussion, they revolve around three Fifers – Rankin, Leven and Rebus.

Leven settled into a life of gigging, mostly across Europe, describing his songs as being born in German hotel rooms the afternoon before a gig. He was prolific, adopting the pseudonyms Sir Vincent Lone and Jackie Balfour to put out yet more albums.  Many fans like me will still not have heard all his work. I can imagine him even now if cancer hadn’t taken him in 2011, playing to 100 people, wandering from story to song to story and conjuring an unforgettable evening, then heading to another town to do the same thing tomorrow.

‘Everybody needs a code to live and die by. Even a non-code is a code. My life is built round hotel rooms and the rigours of touring. A day off in Goethe 87, my favourite Berlin hotel, is an example of the sort of environment where I do my best thinking. When I’m lucky, it’s the thought of the heart that shines through in the songs that come forth – these songs are the code of the travelling man.’

When he died, his partner Debbie Greenwood found this in one of his notebooks and shared with with journalist and fan Paul du Noyer:

Find out more about Jackie Leven