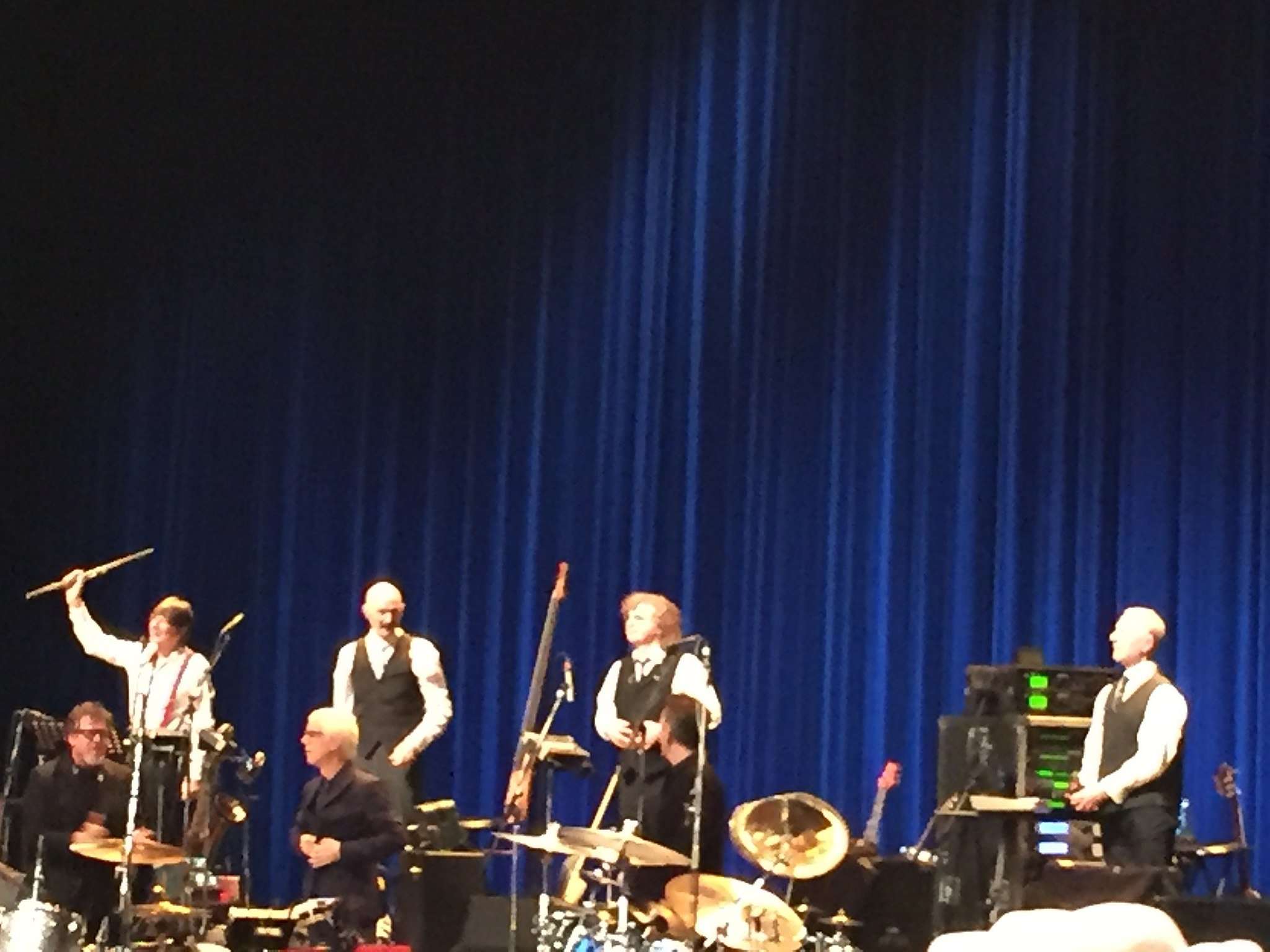 I sat four rows from the front. The front line of the band was three full drumkits. The set list was largely drawn from a period of the band’s history that hadn’t greatly interested me before. I had earplugs in, but I took them out after three pieces. After two hours I thought this was one of the most intense, compelling undistractable concert experiences I had ever had the privilege to attend. In 2014 King Crimson were back in my life 45 years after they first barged in. 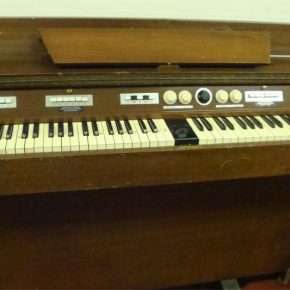 In the late 60s I was a big fan of the Moody Blues, with their ‘cosmic’ lyrics and, of course, the sound of the mellotron, that ghostly recreation of an orchestra miraculously triggered on a keyboard.

A friend lent me In The Court of the Crimson King saying I might like it as it had a lot of mellotron. He was more a fan of ‘heavy’ guitar and liked it for that reason. Marvelling at the Schizoid Man face on the sleeve, I settled the needle on the first track. 21st Century Schizoid Man repulsed me as much as the face on the sleeve. It was riff-laden, it was lumbering, and then it went into jazz, and went out in a screeching cacophony. This wasn’t a good omen. I was a folkie, a Simon and Garfunkel devotee. What am I doing here? 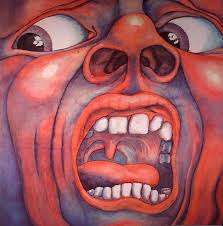 Crimson then did their typical ‘Crimson segue’ from sonic terror to pastoral flutes and I settled down again to listen to I Talk To The Wind. That was good, and the mellotron-drenched epic Epitaph even better, painting the Moody Blues sound on a grander, more epic scale. The rest of the album pleased me just as much, although after a couple of plays I got used to skipping the ten minutes of noodling between Moonchild and the title track.

And yet within a week, I would be playing and replaying Schizoid Man, wondering how any player could figure out the stop-start section in the middle (45 years later I’m still none the wiser), and letting the main riff trample me to its black heart’s content. Gradually the Moodies seemed insubstantial, even sugary, in comparison to this behemoth.

Soon after, what we then called ‘heavy’ music began to be called ‘progressive’. At first anyone who declared themselves ‘serious’, and focused on albums, and was on the right record labels, was called ‘progressive’. But as the seventies got under way, the blues-based ‘heavy’ bands like Free and Led Zeppelin lost the tag and it became focused on the bands who emphasised musical dexterity, tricky time signatures, classical-style bombast and mythico-biblical imagery. By the mid to late 70s, ‘prog’ had become a term of derision for all but a hard core of fans, rehabilitated only in recent years.

I didn’t go for much other progressive music. King Crimson were often called the founders of progressive. So why did I continue to enjoy King Crimson and not the others? Under Robert Fripp’s watchful eye, Crimson moved in 45 years from orchestral landscapes to squealing jazz, to grinding guitar sculptures to danceable interlocking patterns and back again. Much of that time they didn’t even exist, with Fripp appearing to dread the regular call from his muse to reactivate them.

It wasn’t just about grandeur. Crimson had grandeur all right, but so did others. There was seriousness, but not all prog was serious – Rick Wakeman didn’t take himself that seriously in his white cape. Later, in the 1980s, King Crimson was fronted by Adrian Belew, constantly smiling, laughing, posing and making the navigation of a piece in 13/8 with every fifth bar in 9/8 look like the greatest fun in the world. Trading notes with Robert Fripp like Olympic table tennis , he could even draw the odd smirk from the Venal Leader. So it wasn’t just about serious intent. Much Crimson music was a sonic assault, designed to disturb. (It was rare for me to like a new Crimson track on first hearing. There were very few that I continued to dislike after the third or fourth hearing. ) But it wasn’t all aggression. Every Crimson album or concert has moments of captivating beauty.

Fripp never tires of attempting to dissociate King Crimson from the label ‘progressive’. When it’s used by detractors, it’s synonomous with ‘excess’ and ‘self-indulgence’. I’d say it’s hard to see self-indulgence in King Crimson. Crimson is about contained energy, about an engine strong enough to contain heat and make it power a machine. (As an aside, however, I did once see a video of Fripp introducing a new Crimson album to the executives of the record company – perhaps playing to their expectations: ‘The first side is accessible, the second side is excessive.’ )

Most King Crimson, particularly the instrumentals, follows the form and approach of classical music. A theme is expounded, then variations of it are developed, counter-melodies spun out, and the band take the familiar symphonic approach of building tension, releasing it, and repeating the cycle with new developments. The difference from an orchestra comes in the ‘release’ which is often a wild improvisation. Even where there are catchy, accessible songs, such as during the Belew period, they will be set in instrumental arrangements that follow that tension-and-release cycle.

Harmonically, too, Fripp diverged from the proto-metal bands of the 70s. Dismissing the typical power chord (root and fifth), he said if you want to be ‘heavy’ then let’s figure out what dissonant harmonies and chords will be most disturbing to the listener. A lifetime’s research or, as he put it at the time, marrying Hendrix and Bartok, began with that question. 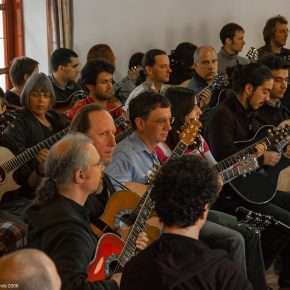 Being a student on Fripp’s Guitar Craft courses gave me an insight into what Crimson must feel like from the inside. Students are given tricky exercises that rely on ‘the division of attention’, such as repeating a short sequence of notes in one time signature (5/8) while other players cycle a similar figure in 7/8, then – at the right point – swapping parts. The nearest equivalent I can think of is patting your head while stroking your tummy. To compound the difficulty, you may be asked to describe what you’re doing as you’re doing it, or to do it while an audience laughs at you and tries to distract you by all means from swaying out of time to deploying fart cushions (a Fripp favourite!). You learn about focus, all right.

Now take those exercises, bake them into actual musical compositions at the level of highly trained and experienced players, and put eight of them onstage in front of an audience. All the musicians who’ve been in Crimson agree it’s an immense challenge, like nothing else in the musical world, but players of the quality of Tony Levin and Mel Collins keep coming back for more. At any point in Crimson where someone is soloing – running free – you can bet the others are having to concentrate 100 percent to provide the complex structure behind the solo. And the soloist has to know when to stop – none of this nodding to say you’re done expressing yourself! I’m pretty sure the three-drummer lineup is an intentional provocation of that type – ‘OK, three drummers is a given: now how do you make it NOT a mess? Work it out!’

So Crimson now resembles an orchestra in more ways than just wearing formal dress and not having stage banter. Interlocking, complementary parts, tension and release, technical challenge and, of course, striking melody and harmony.

I don’t aspire now to play music of this dexterity and complexity, but I love being in its presence. Fripp always said that a an album was like a love letter, but a gig was like a hot date. He was never satisfied with studio recordings and has spent 40 years revising, remixing, remastering, editing and curating them. But a live Crimson gig is the most exhilarating roller coaster I’ve ever been on and I can’t wait for this year’s tour.