Our gig at the Parlour was great fun on many counts. First of all the band seemed relaxed and confident and have never sounded better. Second, we had a full hour to play so we could enjoy playing almost all the songs we know including our new cover of Dan Hicks I Scare Myself and our own new song Love. The best thing about it is that almost all of the audience were strangers but they stayed, and gave us full attention and a very warm reception. When a band is used to an audience of friends and other musicians, there’s always a fear of being unable to get beyond it. But on Saturday we did and I think we won some new friends. We’ll certainly be invited back to the Parlour. Videos to follow shortly.

On Thursday I had an early rise for fun of a different sort, a hot air balloon trip which was a birthday present from Madame some time ago. Here’s a photo taken by a passing skydiver with enormous manual control. 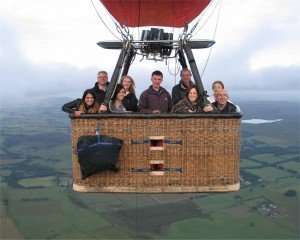 Now practising for the next gig, which is a Waveforms set at St John’s Church on Wednesday. There’s no religious context to this performance, other than the church offering a lunchtime sanctuary during the Festival, so don’t worry about anyone hitting on you with scriptures. Waveforms can be interpreted anywhere on the spectrum from an attempt at sacred music to chill-out ambient. If you’d like to judge for yourself drop in on Wednesday at 12.