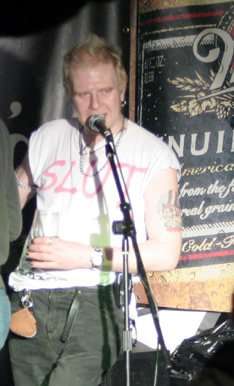 I heard on Wednesday evening of the death of Fritz VanHelsing. I never knew his real name, but then he wasn’t a guy you would ask.  He lived punk, all torn shirts, black leather and spikes, with a Keith Richards sway, and he tried to convince you he was a badassed mean sonofabitch. ‘How are you, Fritz?’  ‘Too damn sober.’   But it only took the briefest conversation to penetrate the image, and find a gentle, considerate and very organised character underneath.

I first met him in the mid 90s, when he was running the Full Moon Club and fanzine along with Rosie Bell and Malcolm McLean. In Bannerman’s and various other venues he would invite bands he liked and bands he wanted to give a chance to.  It’s a fair bet that more than half the sets I played for a good few years were at his invitation. Because if Fritz liked what you did – and it didn’t have to be anything like punk – he would do everything he could to get you an audience.  Fritz, Rosie and Malcolm were like a dream team, organising venue, equipment, instruments,  photography and a fanzine writeup, all for the love of it. They just called you, you turned up and played, they gave you a great intro and a warm reception.

At the Full Moon I played solo, with the Innocents and with the Houdini Box, any which way but get up there and play.  For a while Fritz was even the drummer in the Innocents, and not in a polite and reserved way.  He loved the ‘Dylan’ song and loved propelling it to new speeds where the singer could barely spit out the syllables to keep up. That was fun. 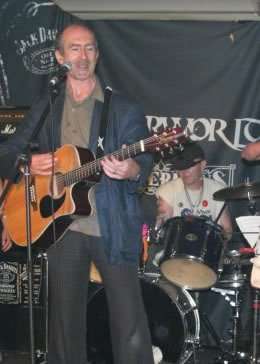 When Fritz stopped promoting gigs I lost touch with him and I hadn’t seen him much in the last five years. I know that life wasn’t easy for him and many said he was his own worst enemy. But he did get out to gigs without the pressure of having to organise them.  Whatever we heard, it was clear that he loved music, loved his bands, and loved his wife Mary and daughter Jet.  If you’re anywhere, Fritz, wherever you are, rave on – and thanks.

“He was not just stoical he was having a good time. He was some machine.”