About 40 souls braved a frosty night to gather in a very cosy Oswestry Station Building and enjoy an evening of contemporary folk music from Norman Lamont (accent on the first syllable) and Nathan Ball.

Norman has been singing and playing around the Edinburgh area for many years. I first met him in 1976 when we were both at Moray House College of Education. I don’t think he would ever describe himself as a ‘folk musician’. He lists his influences as Leonard Cohen, Paul Simon, Robin Williamson, Mike Heron, Robert Fripp, Brian Eno, David Bowie, The Beatles, John Cale, Bob Dylan, The Handsome Family, Richard Thompson, John Martyn and Joni Mitchell – quite an eclectic list. The music on his CDs ‘Roadblock’ and the compilation ‘Anywhere but here’ is full of lush and complex arrangements, sometimes melancholic, if that’s not too strong a word, but leavened with wit and humour. I wondered how these songs would work with just a voice and acoustic guitar. I needn’t have worried. The songs are strong enough to cope in a pared down setting. They were delivered with great panache and charmed the audience. I particularly liked the haunting ‘Come with me’ and ‘The Ballad of Bob Dylan’ is a very funny song. (Full review) 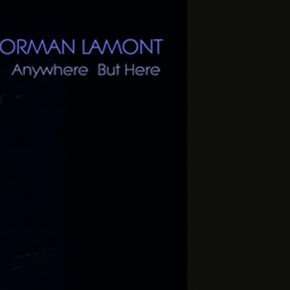 Norman Lamont comes to the airwaves from Edinburgh, Scotland. He has been playing the songwriter scene since 1990 earning his fan base one song at a time. His latest release, “Anywhere But Here”, does not disappoint with an eclectic mix of thought provoking tunes that spin in your head like a vivid dream.

This CD is a compilation of songs from Lamont’s previous projects spanning from 2004 to now.  It opens with, The Desert Was Better”, which sets the mood for the things to come. The crowd pleasing hit, “The Ballad of Bob Dylan” is amongst 12 other tracks that are nestled in with numerous other pleasers from his past.

Sounds like the songs have found a nice home. Each ballad adds to the other and they play one by one as you sink deeper and deeper into Lamont’s world. He has included the best of the best spilling out haunting stories with an atmospheric ambiance. His music seeps in your ears and takes over your soul. It is an extremely mellow vibe that relaxes you into a gratifying state.

While in his world the melodies allure you to listen carefully to the lyrical content. Each song has a blissful tale of contemplative life lessons, love lost and yearning. He pours his heart into his musical pursuits and it is revealed through whimsical productions and a solid mix of prosody between his words and music.

If you are looking for something original unlike anything you have heard before, look no further. Norman Lamont is a hidden secret that needs to be shared with the world. I enjoyed the journey this CD took me on and feel compelled to expose the talent that Lamont so naturally creates. “Anywhere But Here”, is not only beautiful music, it is also a tale of talent galore. Some people have “IT”, that “IT” that no one can describe, but you know it when you hear “IT”.

Ayrshire-born, Edinburgh-based maverick Norman (pot-pourri poet, not prickly politician!) could be Scotland’s answer to Leonard Cohen, albeit with a wicked sense of irony.

Third album, the reflective Roadblock, sees the former Hungry Ghosts singer come of age, throwing sombre songwriting (example Dorothy’s Book) into the baby’s blues-tinted bathwater alongside the cod-reggae of I’ll Be Back. Whether Cohen-esque, comic-esque or credit-crunch-esque (£2 a time to see him!), Lamont trades bundles of doom and despair from a heartfelt perspective and is well worth a punt. (Martin C Strong – The List)

Norman Lamont (don’t, he’s probably sick of it) is a well-known singer / songwriter on the Edinburgh acoustic scene, and Roadblock is his third album, released on new local online record shop SecretCDs.co.uk. It’s a work in debt to the 60s and 70s, particularly the languid guitar and hushed vocals of Dark Side of the Moon. Fans of Leonard Cohen or Nick Cave’s Boatman’s Call era will find solace in the moody depths, and title track Roadblock, as well as one called Anywhere But Here, are reminiscent of the dark dramas of The Doors. Lamont proves himself to be an accomplished mood-setter and lyricist, with the overall effect one of quiet, rueful reflection. If all this seems a bit gloomy, there’s a bit of skanking to raise the mood on I’ll Be Back. If this sounds like your thing, Roadblock is well worth budgeting for in these times of economic crisis.  [Euan Ferguson – The Skinny]

There are some albums which hit you straight between the eyes from the first note and others which slowly worm their way into your psyche. With its reserved and understated performances, Roadblock is definitely in the latter category. Sleeper or not, glorious moments creep up and dazzle you with their uncluttered brand of consummate balladry.

Not to be confused with the pugnacious Tory chancellor who famously sang in the bath whilst sterling collapsed about him, this Lamont is an Edinburgh-based songwriter.

A crisp production presents acoustic-based songs laced with some dreamy slide guitar, arctic Lanois-style trimmings and some gorgeous violin flourishes and arrangements. Fronting it all up, Lamont’s voice trembles within the skin of bittersweet melodies that is reminiscent of a nasal Ray Davies, and it’s this likeable fragility which delivers the chills on a run of three standout tracks – “Dorothy’s Book,” the epic ambitions of “The Spell” and the darkly sublime “Anywhere But Here.” These 16 minutes (plus the deliciously gloomy ruminations of the excellent title track) shows Lamont to be a songwriter of depth and imagination.

Only the frankly baffling inclusion of reggae-based clunker “I’ll Be Back” and the ill-fitting strut of “When I Came Home From Egypt” distort the otherwise brooding atmosphere which Lamont creates throughout the rest of the album with such care and attention.[Sid Smith]

Since his last album, Norman’s clearly been working on his sound –his confessional, intimate vocals are set against a much broader instrumental backdrop featuring everything from string arrangements to ukuleles.

I Want To Know, the questioning, intimate opening track, segues smoothly into a nice bit of Frippertronics at the end. We come down to earth with the next song, When I Came Home From Egypt, in which the protagonist is the kind of loser hero beloved of Steely Dan (think of Rikki Don’t Lose That Number). I like the self-deprecating humour and the local references (‘now the glass falls out the windows as I walk down Princes Street’). For Roadblock, Norman’s close-miked vocals achieve something of an old blues singer vibe; the soundscape has a suitably swampy, Daniel Lanois feel. Best Of The Blues is one of Norman’s poppier compositions which you could imagine on a Simply Red album – great melody and harmonies. The tale of I’ll Be Back is narrated by a rather cheerful but annoying ghost (’in some kind of transit lounge between the realms of existence’) set to an engagingly upbeat ska rhythm. Great bass line.

Things are either black or white ‘with no discretion’ in Dorothy’s Book, but rather than criticising this polarised world view, the song goes for an elegiac feel which made me think of those early Velvet Underground ballads – Candy Says, maybe. The Spell is a mysterious ballad with elements of a murder mystery about Jeanie Marshall who ‘went to meet an old schoolfriend’ and ‘was never seen again’ while the protagonist ‘left home a broken man’. It’s the vehicle for some of Norman’s most soulful vocals to date, but at 7.31 it outstays its welcome.

Like the first track, Anywhere But Here finds Norman questing again: ‘If I have a destination, at this point it’s still unclear.’ Appropriately, his lyrics are backed by another of those Time Out Of Mind Lanois-scapes where you can almost hear the hoot-owls. Come With Me, the final track, finds Norman invoking his muse and weaving some delicate Frippertronic textures on guitar.

Lyrically and instrumentally, Roadblock is another step forward for Mr Lamont. It’s about time someone signed him. [Adrian Whittaker, freelance reviewer and music historian]

(Reviews of other albums are on their respective pages.)