I can’t say Robbie Basho was ever really an influence or inspiration to me, but he’s an intriguing artist from the same period as many of the ones I write about, and hardly known at all, so I’m happy if this introduces some people to his music.

I don’t try to follow the masters; I try to ask the same questions they asked. 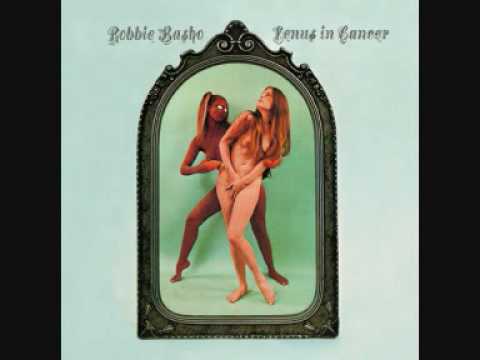 One evening, way back when the world was young, I found an album in a bargain bin. It was called Venus In Cancer and had a weird cover. Two naked women, one black, one white, circling each other with crab claws for hands. Eh?

On the back were some spiritual quotes from Meher Baba, whom I knew as the guru of Pete Townshend and Ronnie Lane among others.

I was intrigued by the portentious titles like Eagle Sails The Blue Diamond Waters and Cathedrals Et Fleur De Lis (a 35m track).

His name also attracted me, as I’d recently discovered the poetry of Matsuo Bashō. It was cheap so I bought it out of curiosity.

Twelve-string guitar meditations, long instrumentals, drone based. Eastern themes. Then after a couple of tracks, a very strange vocal, like a dreamlike classical/folk hybrid, long sustained notes in a warbling vibrato.

I couldn’t find out anything about him in the only resources available at the time – the music press.

I didn’t play it much, sometimes as ambient music while I was drawing or painting. Then I forgot about it until now.

I came across it recently while cataloguing my vinyl collection to sell. I decided to take advantage of the internet and find out a bit about Robbie Basho. Here’s what I found from Wikipedia, Discogs, and a fan site, the Robbie Basho archives.

He was born Daniel Robinson in 1940 in Baltimore, Maryland. At school he became friendly with John Fahey, already a guitar exponent, and by the age of 19 was playing guitar, exploring Oriental thought and calling himself Robbie Basho, after the Japanese poet Bashō. Along with Fahey, Leo Kottke and others who would become more famous, Basho wanted to raise the profile of the twelve-string guitar and steel-string guitar generally to classical concert status.

‘Father of the American Raga’

He tried to bring the raga form into Western music, and his fans remember him as the ‘Father of the American Raga’. His pieces, almost all on twelve-string, include elements of Indian music and the modern classical tradition, notably Bartok. It goes without saying he never found any commercial success or even critical acclaim during his lifetime. But in California, at a time when experimentalism in music could find financial supporters, he seemed to impress enough people to be able to record a series of albums between 1965 and 1974. Even after he ran out of record company support, he privately released cassette albums right up to his death.

He had a deeply serious approach to his music, studying the sarod with Ali Akbar Khan and using open tunings on the twelve-string to provide a drone for improvisations in scales from the Middle and Far East, and Indian subcontinent. In various phases of his life, he was influenced by Japanese, Hindu and Native American spirituality, although his longest connection seems to have been Meher Baba, the Iranian/Indian guru followed by Pete Townshend and Ronnie Lane among others. He appears to have been a lonely and intense character.

For example, these are his writings on the colour and quality of different chords. (More detail in the Robbie Basho Archives) 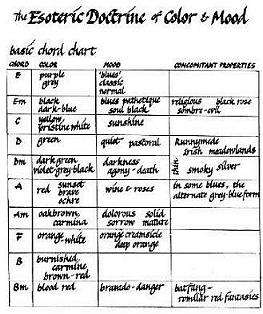 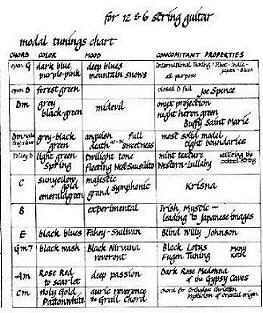 Guitarist Henry Kaiser (who has played with Richard Thompson among others) said he was going to see a Basho show in Berkeley in the late 70s when he came across the forlorn musician in front of the venue.

So he got a private show.

“Basho is a great example of somebody who’s a true original,” Kaiser said. “It’s impressive how much stuff he figured out so quickly.”

(From a eulogy and tribute by Jerome Burdi)

His death was as strange as his life. Robbie Basho died in 1986 during a chiropractic session where an experimental technique used by his chiropractor accidentally severed an artery and caused a stroke. He was 45.

While researching him, I found that there has been a revival of interest in the 21st century. His albums have been re-released, live recordings traced and issued. The site has found the only surviving video footage of Basho, and even one of his guitars. There’s even been a tribute album by admirers released on Bandcamp.

If he had been around later, he would have been embraced by the ambient and New Age movements, and would at least have made a living. He may have been recognised as a serious composer, his dream.

There’s very little footage of Basho. Here’s one I found from a cheesy TV show. The performance begins 1:05 into the video.

A live recording (no video) with vocals: