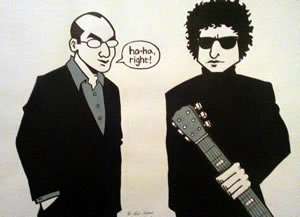 The Ballad of Bob Dylan has always been the most popular of my songs. In the much-missed Full Moon Club it won me an award for ‘Most Shouted-For Song’ from Fritz van Helsing (it was probably Fritz who did the shouting!).

It’s had more radio play than anything else I’ve done, which isn’t saying much but is nice. The play often coincides with Dylan’s birthday. My PRS statements showed to my surprise that it’s used in some aerobics instruction somewhere in the world (really). It was used on a Dylan tribute album in the US, and even won me some cash in a songwriting competition at the String Jam club in the Borders.
And of course there was that lovely fan in the Borders who pleaded with me to play ‘that song, you know, that song! The one about Elvis!’

I guess the reason people like it is that it has a sense of fun, and it uses various Dylanesque ideas – multiple viewpoints and throwaway lines – without being a parody. That and the fact that the storyline isn’t clear so you can follow different aspects of it each time you hear it. That’s what I think anyway.

I’ve told the story of writing it here and there, but here it comes again. This was during the period in the 1980s when Dylan had produced little of any quality and most people seemed to think he was a spent force. I was in a shop in Leek in Staffordshire, where I lived at the time, trying on some jeans. A song came on the radio, and I realised it was Dylan, I hadn’t heard it before, and it sounded great. The presenter said it was from the Traveling Wilburys first album, which was about to be released, and was called Tweeter and the Monkey Man. I read later it may have been Dylan’s parody of Bruce Springsteen. Maybe.

Anyway I loved the track, but the album wasn’t out yet. Later on, at home, I got out my guitar and tried to remember it but couldn’t. I was enjoying the effort, though, and started making stuff up. ‘He flew in from Miami with a bagful of bones’ started it off and the rest just suggested itself from rhymes. Most of the first verse came out as ‘la la la loans’ ‘la la la this must be the place. and so on, I didn’t know where it was going until the line ‘He said his name was Bob Dylan’ came. Could I write a whole song about Bob Dylan? I wondered if I could and took the idea for a walk. The rest of it came fairly easy. I knew I wanted to use the Tangled Up in Blue approach of different narrators, all unreliable, but they seemed to emerge as different Dylans, or maybe Dylans from different periods. It’s interesting to note the approach the film I’m Not There took – very similar.

When I got the line ‘Some days I feel bitter (originally ‘better’) some days I feel worse’ and the closing line ‘ I just write another song and play it to the nurse’ appeared fully formed on the paper, I knew I had something and set about completing the unfinished lines and tying up some loose ends.
There was a folk club in Leek with floor spots so after a couple of weeks knocking the song around in my head I decided to try it live. I don’t think I sang it very well, but it got a reasonable reception. Afterwards someone approached me, saying he was a Dylan fan and he’d enjoyed it but I’d missed something – with Dylan’s singing it’s all about the rhythm of the words, and playing with the beats. That was the key to singing it and it’s sustained me all these years. Almost every time I sing it, it takes a slightly different approach to the words and how I spit them out. Without that I’d have got extremel bored with it, but it’s still fun to sing.

The Heaven Sent and I have started work on a band album and it’ll include a new version of Dylan based on the current band arrangement and featuring a special guest star instrumentalist.
Till then, here’s the new live version.