On Sunday afternoon I played at the Clothes Swaparama, an event held by local environmental and anti-poverty activists. I watched some good performances including Ben Young and Lindsay Sugden’s Storm, while playing acceptable bass, clumsy mandolin and not-as-good-as-the-rehearsal guitar for Ms Fi. She was good so it was all OK. I watched a well-put-together film called The Story of Stuff which I thought was an excellent presentation, but a rather simplistic message along the usual lines of ‘business baaad, government baaad, everyone else goood’.  I don’t know, watch it and make you own mind up. When I see business in all its diverse forms represented by a caricature guy in a top hat, a credibility gulf appears for me.  The event itself was based on reducing waste by bringing along clothes you don’t want, putting them on a table and picking up clothes you like. I picked up a jacket which I then proceeded to forget to take home. I hope it’ll please someone at the next event.

Yesterday was a special wedding anniversary for me ‘n’ Madame. We had lots of silver-wrapped presents and an enjoyable celebratory dinner with her father and sister and our son, plus a text from our daughter.

Today, a day of catching up with practicalities, before flying to Egypt tomorrow to reacquaint ourselves with sunshine, sand (desert sand that is), and at some point a walk around the Cairo suburb of Heliopolis, where we lived shortly after our lives became entwined. 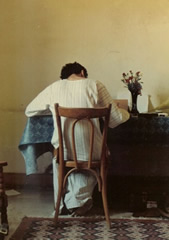 1 thought on “Swap and wife”