When there’s fire in your belly, boys

You need iron in your backbone, yes you do … 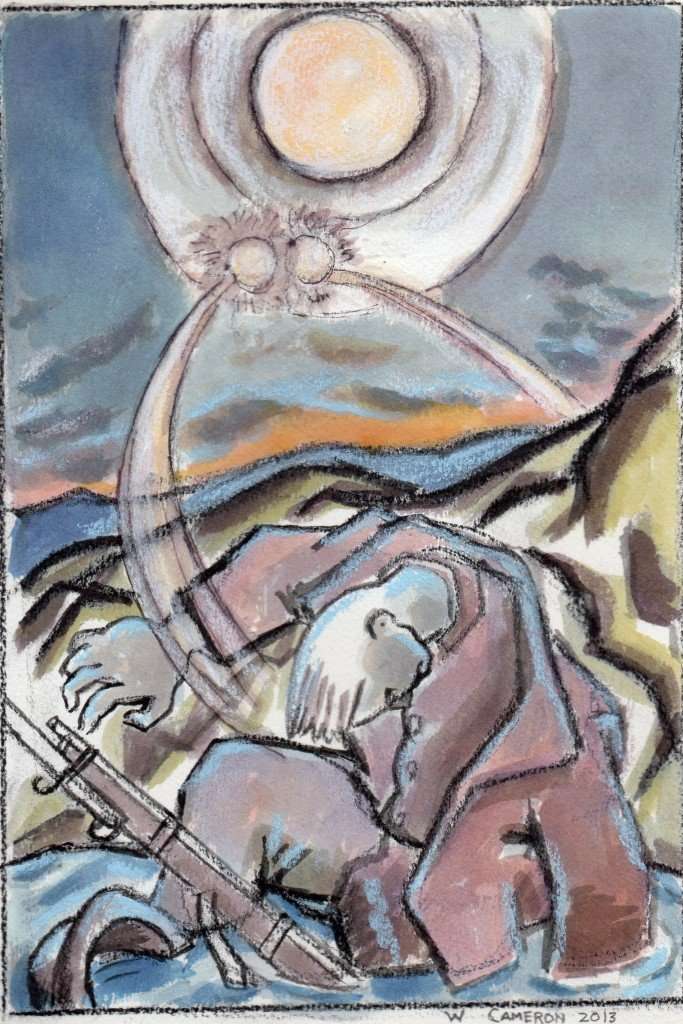 The image here is an interpretation of the song by a lifelong friend of mine, William Cameron.

Elsewhere I’ve written about the artist Klee’s advice to his students – ‘take a line for a walk’. This song started that way – with a first line ‘Let me tell you a story …’ and was pretty much improvised on the spot. I let the characters dictate it, the lieutenant and his Hungarian artist wife. At the end it was a bit of a struggle to tie it up until my Golden Rule appeared unto me as a reminder – It Doesn’t Have To Make Literal Sense! So in the last verse I switched from the lieutenant as narrator to one of his soldiers, dying in the mud. He’s been so entranced by the lieutenant’s story that when he dies he’s walking into the light with the artist from the lieutenant’s story. I like to think the lieutenant knew this would be their last day alive and wanted to tell the story to give their imaginations something else to work on, other than how they were going to die.

I Am Not The One For You (stream)

I Am Not The One For You lyrics

Let me tell you a story
Let’s pretend you’ve been fed
I know it’s tough since the captain deserted
And worse since the quartermaster’s dead
But if I tell it too slowly
And if I tell it untrue
March me out of this tent and string me up, boys
‘Cause I am not the one for you

She was an artist from Hungary
He was a grunt just like us
They came, they saw, they got down to it
With the minimum of fuss
She tended all his abrasions
He let her do what an artist has to do
Till one night she came home and said ‘It’s over –
I am not the one for you’

He fell back on the sofa
Asking what it was that he’d done wrong
She took a knife from the kitchen
Put on a country western song
She held the knife to her pretty throat
Then the doorbell rang right on cue
She fled out past the double glazing salesman
Crying ‘ I am not the one for you. ‘

It was me, boys, that found her in Budapest
She tried to get me to dance to her tune
I used my diplomatic immunity
To remain diplomatically immune
For when there’s fire in your belly, boys
You need iron in your backbone, yes you do
I walked right up to those deep dark eyes and I said
‘I am not the one for you.’

I woke up in her bed the next morning
Took her back to him later the same day
I know in my heart one day he’ll kill her
But I guess that’s just the price you pay
When the sun comes up we’re moving to the front, boys
The orders are just coming through
So you can run with me or you can run the other way
And say I am not the one for you

Now the story that lieutenant told haunted me
As I lay dying in the mud
My younger life, my days in double glazing
The memories flood around me with my blood
And when I left my body, somewhere far away
She left her body too
And we walked into the light, me and the artist
That’s my story, and every word is true.

I Am Not The One For You live

This was taken shortly after I’d written the song (hence some of the lyrics are different) and was the first and only time I’ve ever played banjo in public! James usually plays bass in the Heaven Sent.