A pair of eyes, blue-grey like hers
Glistening and clearly still alive 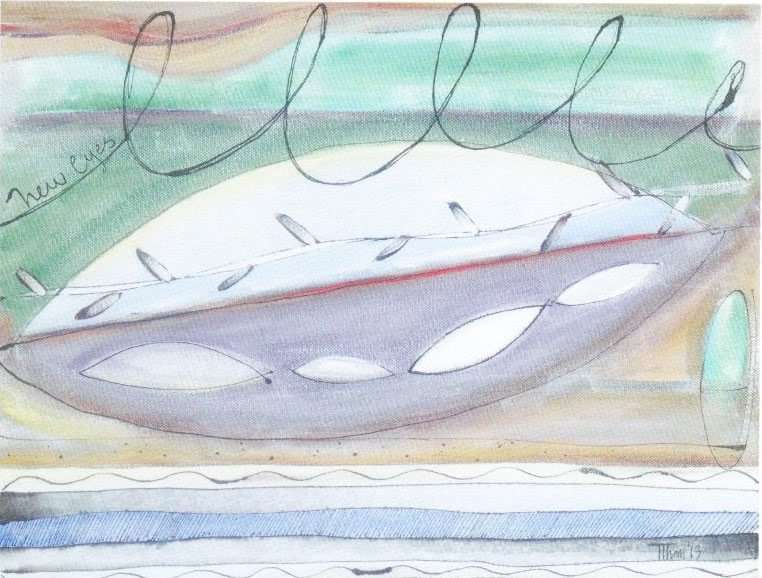 The image for this song is an abstract by ceramic artist Tricia Thom (whom we’ll meet again in the next song). It’s very similar in style to her pottery which you can see at triciathomceramics.com.

Although it’s clearly not to be taken literally, New Eyes is more autobiographical that most of my songs.

I did have an artist girlfriend, and was hit hard by losing her. And she did leave me a canvas. And over months, perhaps trying to recreate our life together, or perhaps just as a necessary therapeutic outlet, I took up drawing and painting, which I found incredibly healing. I loved the fact that I would begin a still life and discover suddenly that three hours had gone by, three hours in which I wasn’t feeling sorry for myself!

I wrote down the story in the middle then, put it away and didn’t think about it until maybe twenty years later when I started making up the melody for the first part of the song. I meant it to be just a pretty pop song, the melody inspired by Trains and Boats and Planes. But after a couple of days singing ‘New eyes, new eyes, made for the sunrise’ I remembered the story I’d written and decided to try a trimmed version in the middle of the song. It seemed to fit the narrative flow very well.

I tried it live, at first singing the narrative section because I found it nerve-wracking to do it as a spoken narrative. But when I did I knew that must be the way to do it.

Sometimes, when I had started the narrative during a gig, and knew I’d have to go all the way through, even if nobody was interested, I thought I could have made the whole thing shorter by just saying ‘I took up drawing as a hobby. Thank you very much!’

New Eyes originally appeared on my album The Wolf Who Snared The Moon. 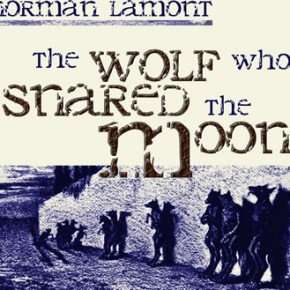 But the sky is grey

There’s nothing really in the weather

But that’s nothing new

And I think that might be about to change

I keep on catching glimpses

The way the sunlight falls on things

With my scribbled looks

At all the things I took for granted

That’s a cup of tea

That’s a pair of shoes in the corner

Why can’t I keep on looking

Till the sun no longer shines

She left a canvas at my place – she left a lot of things. Some sort of unfinished landscape. Beautiful and pitiless in her new clothes, she left.

One afternoon, nursing the wounds on my chest where she’d torn herself away I picked up the canvas, ran my fingers across it, the surface rough and firm.

I could feel something underneath, so I picked up a tiny silver knife and cut it open.

Very strange – a pair of eyes, blue-grey like hers, glistening and clearly still alive.

I pressed them into my sockets, dry and empty from nights of tears.

It felt strange at first, but slowly over days came a new world of form and ground, of light and shade, of shape and line; colour  active, like a conversation unheard by the old eyes.

The way a book lay on a desk

The way a tree leaned in the wind

That had been true forever

Why can’t I keep on looking

Till the sun no longer shines

The Jeweller by John Cale

I don’t have any videos, live footage or alternate versions of this song, but here’s a piece of prose by John Cale that tells a similar story of ocular transformation, but needless to say, much darker than mine. It’s the last track on his 1975 album Slow Dazzle.

Very slowly he sipped his tea, not shifting his glance from the thick double-spaced printing he read with his jeweller’s eye

Engrossed in his corner, he passed onto the other inhabitants of the room a scrawled insularity of time and space

For both passed him by with the speed of light, not unlike the flow of substance, however varied, into that lysergic entity known as the black hole

He was hardly ugly for his time, and conversation was certainly not lost on him
Drastic measures were called for, and as in antiquity the lonely man was blessed with wisdom to the point of desperation

But there in his corner, developing around him like a sun, was a climate of such rare beauty that sight and sound could no longer be considered sufficient food for the senses

“What does this word mean?” he enquired of the solemn waiter hopefully
“Nothing for dessert sir, ” came the reply, “perhaps a cocktail, demitasse or a herbal essence, it helps the breathing you know sometimes.” “The bill, if you don’t mind, ” quickly he shot back

And as the patter of the feet faded in the room, for he barely heard them now, his eye slowly began to close, and by the time he emerged on the sunny street he was forced to rely entirely on the other eye for help, but happily it continued its many functions, blinking gently for lubrication, and registering images
It was rush hour, in Hawaii only 10 am

So, turning into his street, he stopped at the drug store and bought an eye patch that soon covered the reluctant eye

Climbing the stairs he pondered what to do next, he would call a doctor and have tests made, eat nourishing food and if necessary consent to surgery, the last resort of the gambling man

And at 1 am he awoke from a dream and after fumbling his way in the obolescent light of his room he peered into the rusty veins of his mirror and lifted away the patch
What he saw astonished him. Where once was tremulous tissue and membrane was now a follicle and perfectly formed vagina with vulva, overgrown and mysterious, unrevealing and still to the untrained eye

But in the deep dark recesses of that sticky occlusion lay the unclosing watchful eye of disgust in its closing moments, lunging forward and hungry for the cold light of day.