Skip to content
He said ‘That guy there used to be a country western star
Who put down his roots and never wandered far
With his Jewish mama and five kids on the farm
It had been too damn long since he’d done any harm.
His wife cut his throat, he had to get born again
I got his job, he’s been after me since then.’ 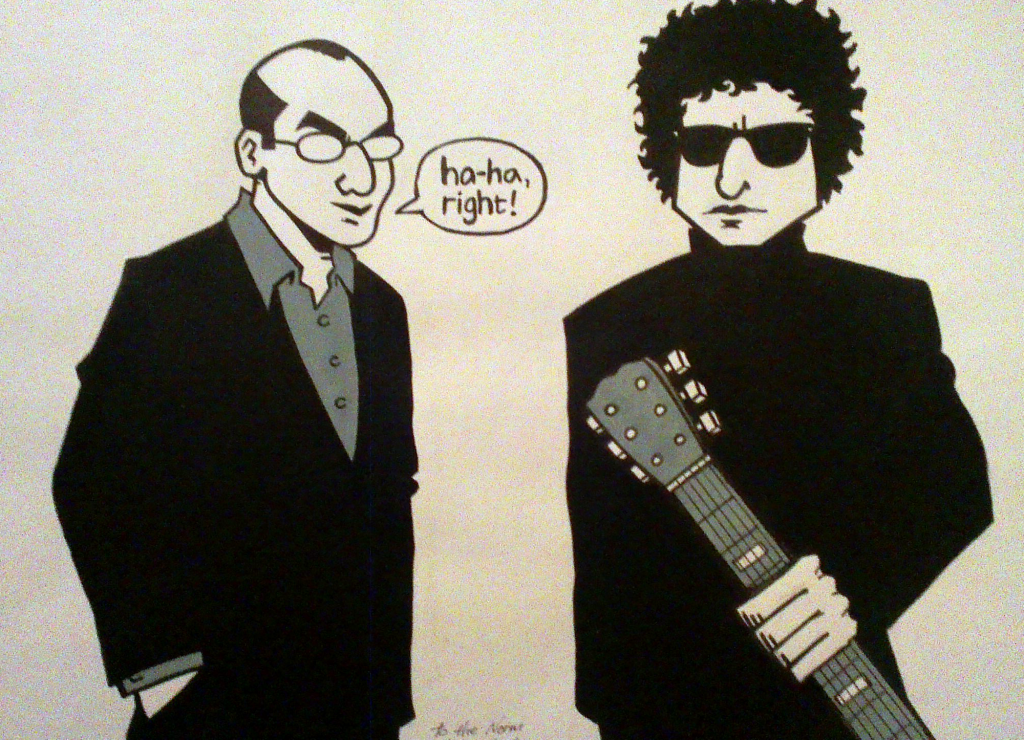 The image here is drawing given me for my 50th birthday by Lynsey Hutchinson, a talented songwriter who played bass in my band the Innocents for several years. She now draws comics and book illustrations and her work is on display at The Houdini Box.

The Ballad of Bob Dylan has been good to me. It’s the only song I’ve made any substantial income from when I won a £100 note in a songwriting competition in The Borders. In the Full Moon Club, an Edinburgh music night it even got an award for ‘most shouted for song’.

I’ve written elsewhere on the site about how I wrote it – I was trying on jeans in a shop and heard on the radio Dylan’s song Tweeter and the Monkey Man from the Traveling Wilburys album. It was the first decent thing I’d heard from Dylan in many years. Later at home, I tried to remember it and found myself very quickly writing a song about Bob Dylan, using the different viewpoints technique he used on Blood on the Tracks to bring in Dylan characters from different points in his career.

Here I’d like to offer you a brand new take on the song from the next album, In Another Life. This is how I’ve been playing it with the band for the last year or so. It gives a taste of the album too. Hope you like it.

The Ballad of Bob Dylan (stream)

The Ballad of Bob Dylan lyrics

Well, he flew in from Miami with a bagful of bones
I was singing in the airport bar, just to pay off some loans
Two sleepless eyes in an unmade face
He saw me at the bar, he said “This must be the place!”
Said he was looking for a room for the night
He said his name was Bob Dylan, I said “Ha ha, right!” He spent the night at my place on a couple of chairs
In the morning he was up and off and down the stairs
I found him in the marketplace, busking for cash
Playing my guitar in a rough and ready kind of fashion
A voice like a hangover looking for a cure
I said you sound like Bob Dylan, he said “Why sure.” Twenty miles away, high security hospital
They were looking for a guy who’d jumped the wall
They were looking in the streets they were looking in the zoo
No way of knowing what this kind of man might do
They only thing they’d got on him while he was away
Was he was into Bob Dylan in a big big way. My friend with his busking made a couple of pounds
And with a couple of mine that got a couple of rounds
We sat there reminiscing back down the line
To the sixties, how we hadn’t recognized them at the time
When this guy burst in, grabbed my friend by the sleeve And says ‘I’m Bob Dylan’ – I thought Man, time to leave They got stuck into each other, I never saw the stranger’s face
Barman’s yelling at me Get these guys outta the place
Spitting out language, they were spitting out blood
It was like watching Cain and Abel, before the flood.
Got out to the street and the stranger was gone
My friend Bob Dylan just picked up his bag of bones

‘That guy there used to be a country western star
Who put down his roots and never wandered far
With his Jewish mama and five kids on the farm
It had been too damn long since he’d done any harm.
His wife cut his throat, he had to get born again
I got his job, he’s been after me since then.’

What about the bones? He said ‘I carry them with me
They remind me of a guy I knew in 63
He could have been a big shot, I told him back then
But he turned into a junkie – well I ain’t no judge of men.’
That was his tale, as the evening wore on
When I woke up in the night Bob Dylan had gone. He’d taken my guitar and my cowboy boots
My country singing tie and my country singing suit
Left me his bones, and some kinda book
It might have been a Bible, I never got time to look
‘Cause they kicked down the door, they walked in real slow
They said ‘We’re looking for Bob Dylan’ I said ‘Whaddya know?’ These days I don’t work much, guess I’m past my prime
I’m growing me a beard, that passes the time
I’m living in the country but I’ll get across the wall
When I get a better grip of my short-term recall
Some days I feel bitter, some days I feel worse
I just write another song and play it to the nurse.

Here are a couple of live versions of the song with two very different bands, with eleven years between them.