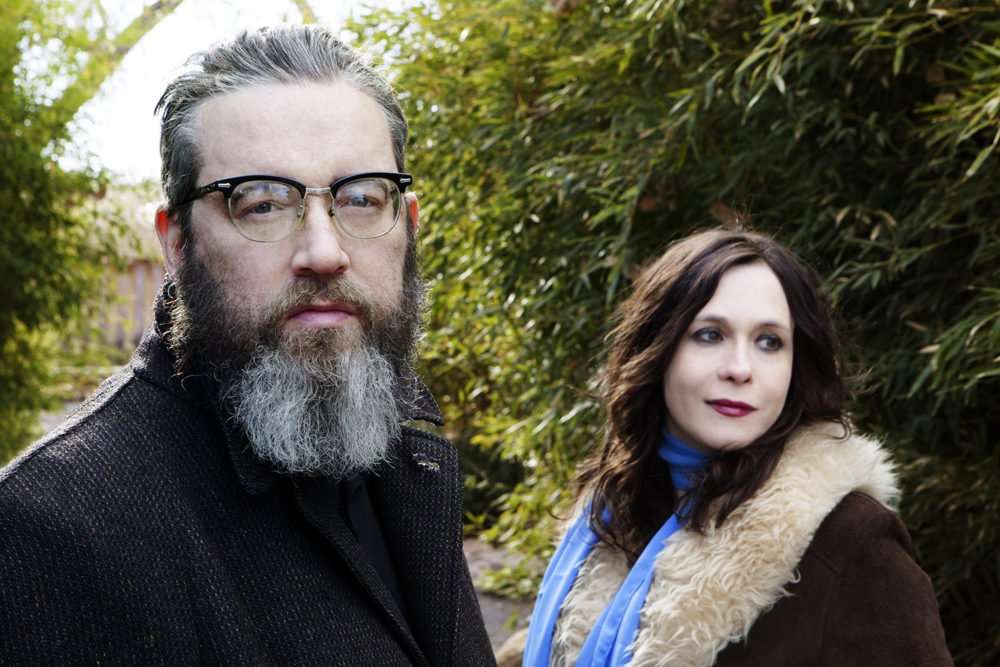 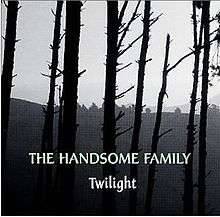 In which the blogger raves about one of his favourite albums, Twilight by The Handsome Family, in the hope that he’ll encourage more people to hear it.

I like Janice Forsyth on BBC Radio Scotland. Not only has she given my songs airplay, but one evening in 2001, I was stopped in my tracks by a song called The Snow White Diner. At first it was the melody that got me, starting on a country road but soon deviating into strange modal lines, sung by a man with a very deep voice. I didn’t grasp all the lyrics but what I did catch was enough to intrigue me:

They’re pulling a car up from the bottom of the frozen lake.
A woman drove her Saturn into the black water. Killed herself and two kids strapped in the back seat. She’d lost her job and didn’t want her kids to be poor.

Outside the crowd is growing … hoping to see the dead woman’s face.

What? Janice then interviewed the singer and his wife, who called themselves The Handsome Family. Apart from their history, the interview focused on the animals that appeared in almost every song on their new album. She then played a song called So Long, which was downright funny in a black way.

Next day I bought the album. I read the lyric sheet on the bus home and noticed it was laid out like prose, and had hardly any rhyme. It’s become one of my favourite albums and one that continues to reveal new depth.

Rennie Sparks writes the words. Her husband Brett writes the music, plays most of the instruments and records the songs. The sleevenotes say “This CD was recorded at home on our Macintosh G3 using Pro Tools. It took along time because the TV was next to the computer.” To date they’ve released 11 studio albums. While the production values have changed over the years, the basics haven’t and their albums are remarkably consistent.

The music is somewhere between traditional country, old-time music hall and alt-country, with a love of dark twanging guitars and very slow time signatures. The first time I saw them live, I noted I’d never heard anyone kick off a set with the slowest count-in to the slowest song ever! Rennie’s lyrics tell stories reminiscent of American Gothic fantasies and old murder ballads, some evoking the early 20th century but most of them placing the action firmly in the present day. She has a poet’s eye for small details, non-sequiturs and powerful pay-off lines. The songs are inhabited by characters with strange obsessions and delusions (or are they delusions?) and there is a very high body count. Rennie said of a book she’d read that it gave a sense of ‘the madness brimming under the surface of things’, which is precisely what her lyrics give.

Take Snow White Diner. Although the attention-grabbing note is of the mother’s suicide, the haunting power of the song is that this is a sideshow to the narrator’s breakfast in the said diner, and two deaf old women eating liver and onions and talking too loud. We’re in the diner, viewing the macabre scene outside through misted windows and the chatter of everyday life.

I don’t know why they’re laughing. Maybe the world’s much nicer if you can’t hear the cars.

Throughout the album, we catch glimpses of drama and strangeness in everyday ugly city scenes.

When they closed the last shopping mall crickets sang in crumbling walls. Termites ate through the doors. Rabbits hopped along the floors … mouring doves built their nests on the escalator steps.
(Peace in the Valley Once Again)

In this fan’s opinion, Passenger Pigeons is one of their masterpieces. It starts as a dirge marking the end of a relationship and how the narrator can’t face staying in the marital home. But with a single link she transforms it into something altogether darker and sadder.

Ever since you moved out I’ve been living in the park
I’d rather talk to the wind than an empty apartment.

Then with this lovely evocation of the joy of new love …

… she plunges us into the true history of the extinction of passenger pigeons.

Once there were a billion passenger pigeons … they were clubbed and shot, netted, gassed and burned, until there was nothing left but miles of empty nests.

… just in case a bird decides to fly through here tonight. I can’t believe how easily a billion birds could disappear.

The visions in Twilight are not all gloomy. In No One Fell Asleep Alone we start with a deer limping across a supermarket parking lot and observe other scenes of urban decay and neglect. Then …

But as the sun fell between the leaning buildings and the trees
A moment came between day and night, painted soft in golden light
The crooked streets shining gold, and no one fell asleep alone.

Many songwriters from Paul Simon to Nick Cave are hailed as poets but without taking anything from them, I’d say Rennie Sparks best deserves that accolade. Any Handsome Family album is worth your time. Apart from Twilight, I’d recommend Singing Bones (2003) and Wilderness (2013), another album of animal songs.

Speaking of animals again, the sleevenotes of Twilight are adorned by chipmunks and an owl. Rennie is frank about the credits.

I don’t know where any of these photos came from. I woke up in a pool of blood and there they were.

What the Handsome Family gave me

Days after hearing Twilight, I wrote Polecats, which became one of my most popular songs. I’m sure when I was writing it I could hear Brett Sparks singing it. In a three-part a Capella version t went onto my first album The Wolf Who Snared The Moon.