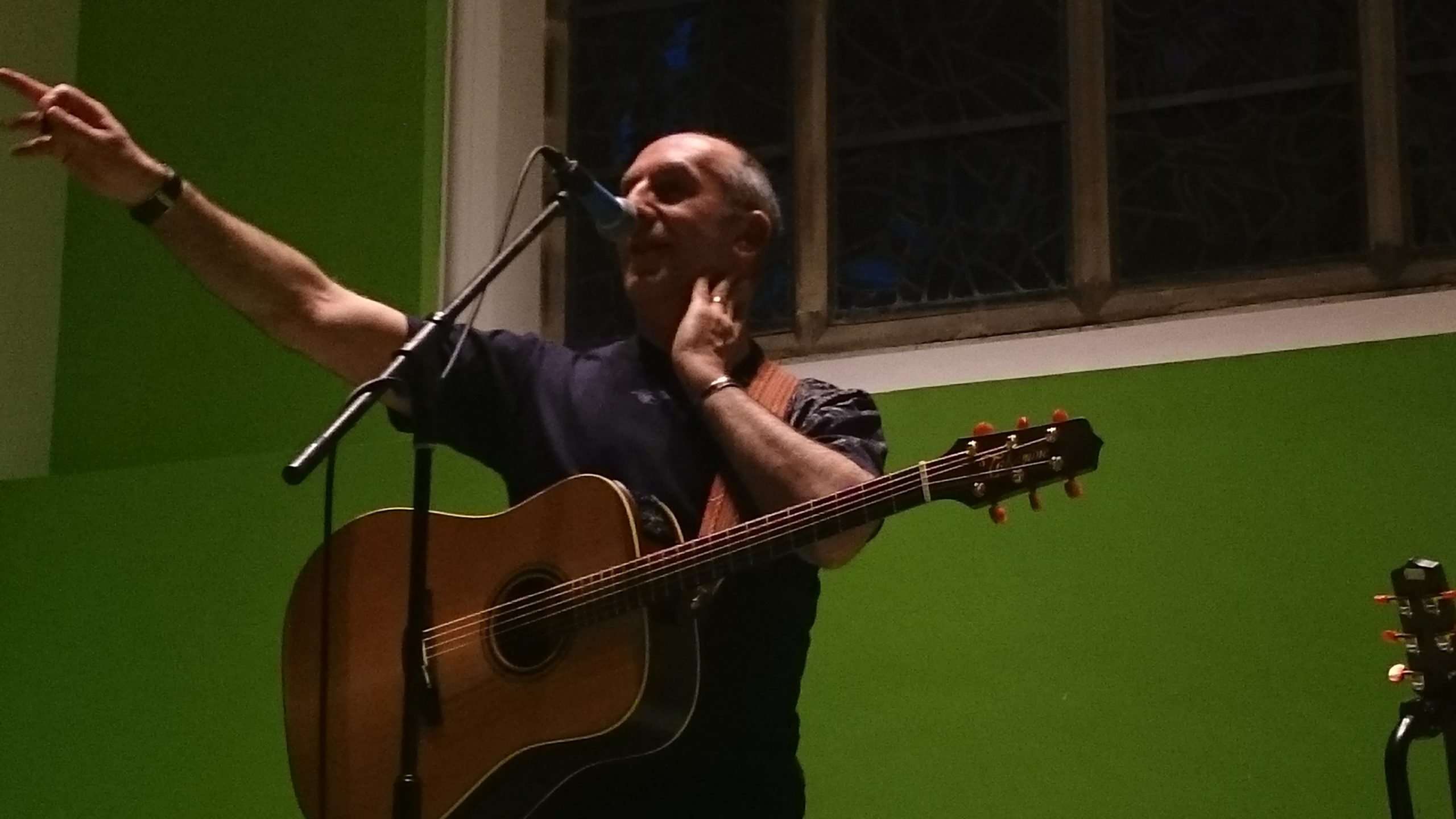 by Andrew Ferguson, writer and musician

How Bob Dylan Introduced Us 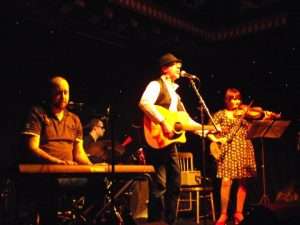 I first got to know Norman Lamont in early 2011, when putting together a tribute night to His Bobness called Dylan Uncovered. The format was for each artist to do two covers of the great man, plus something else inspired by his work. In Norman’s case the latter was, inevitably, The Ballad of Bob Dylan, one of his best known songs. I’ll let Norman himself tell you the story of that one, but, for me, his whole performance was one of the highlights of the evening.

Partly I just wanted to steal him and his bandmates to be my own backing band! Although they’ve since mutated from the Invisible Helpers to The Heaven Sent, Norman’s fellow instrumentalists in both switch between that folk-rock mix of acoustic and electric bandwidths that, in my head, I hear when I have an idea for songs.

Norman’s output is eclectic to say the least, ranging from the folk and rock genres through jazz influences to ambient electronica, but at its core is a body of work that follows that golden thread of songwriting craft from Dylan, Leonard Cohen, and Springsteen, through others such as Nick Cave (Norman and his band also played at my next curated night, Cry of the Cave People, and made the Grand Lord of Goth’s songs his own too).

A typical Lamont song – if such a thing even exists – will often use storytelling skills to drive the lyric on, whether of the shaggy dog variety as in Ballad of Bob Dylan or a tauter form, as in The Last Man to Touch You, where the telling detail of the sexual rival’s journey to meet the narrator’s lover ‘he checks his watch, he mouths a song‘ unwraps the fierce emotions underneath.

One of my favourites from his last album is Not About to Fly, recounting an Ayrshire childhood, from the sound of it, well spent. How many other songs begin with a line like, ‘When I was a spy I stuffed some wires in a jam jar/ left it buried by the river bank where it’s transmitting still…‘? Musically, the opening mandolin motif leads into some superb violin playing before the rhythm section of (acoustic) guitar and bass underpin the whole; but the song’s flexible enough that the band could perform it equally well with Norman toting his Stratocaster. 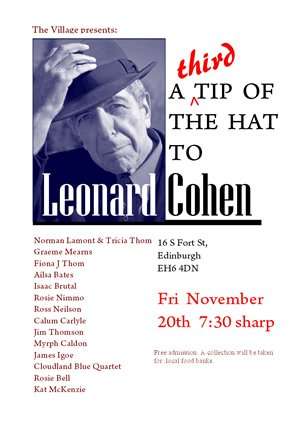 Of course, many know Norman for his long-held affection for Leonard Cohen’s work, and I was delighted to play a small part in his third Tip of the Hat to Leonard Cohen in November 2015. This was one of a series of tribute nights to the now sadly departed Canadian singer-songwriter, and Norman’s recent post about his loss is not just a fitting tribute, but telling in small details on how much Cohen’s approach has influenced his own style. Cohen’s ‘humble’ performance in front of a sell out crowd, for example, ‘stuck with [him] as the right way to approach an audience.’

In the same post, Norman mentions where he was living at the time of various Cohen album releases, including Rotterdam, London, Manchester, Staffordshire, and latterly, thankfully for us east coast Scots, South Queensferry. He’s been a fixture on the Edinburgh singer-songwriter scene since 1990. I’ve now seen him perform several times, and been lucky enough to share a bill with him on a couple of those occasions. In person and on stage, what shines through, apart from superb musicianship and songcraft, is the charm, self-deprecation and wit. Characteristically, after the Dylan Uncovered night turned out to be a logistical nightmare for which I, as an inexperienced gig promoter, was totally unprepared, he took the trouble to write and thank me for asking him to play. It was much more than most of the rest of the bill did!

Not About To Fly

My perennial question for Norman when I meet him these days – apart from, ‘when’s the next album coming out?’ is ‘why in hell aren’t you far better known than you are?’ It’s a dumb question to ask any artist, but dumb questions can still be valid ones. Perhaps he doesn’t push himself forward as brazenly as it takes. Maybe it is an age thing – after all, if anyone’s going to grab attention in today’s overcrowded Youtube/Soundcloud/Bandcamp melee it’s probably not going to be a fifty-plus singer-songwriter who relies on strong melody and intelligent lyrics, and doesn’t generally pause in the middle to rap over a Limp Bizkit sample.

Well, if this post persuades one more initiate into the cult of Norman Lamont, it’ll have been worthwhile. Let the world go to hell in a handcart – standing at the top of 2017, it certainly looks headed that way – if we’ve got Mr Lamont to help it explain it all, the journey there will seem that much less bumpy. And the good news for all of us is, the well’s showing no sign of going dry. ‘I’ve got so many to finish and so many unrecorded,’ he tells me.

Amen, amen, amen to that.

(More about Andrew Ferguson at https://andrewcferguson.com/)