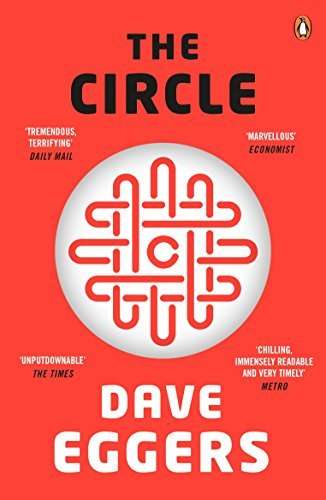 SHARING IS CARING
PRIVACY IS THEFT
These are the slogans of the the eponymous  organisation in Dave Eggers’ The Circle, a Google/Apple/Twitter search and social media outfit run by young Silicon Valley enthusiasts.  Despite the (deliberate) echo of Orwell’s 1984, this organisation doesn’t set out deliberately to be brutal or fascistic. It’s a dystopia created by wide-eyed utopians who see within their technology the opportunity to end corruption and crime.
We learn about the organisation through Mae, a new recruit whose first job is to answer customer service queries via online chat.  As in many call centres her ‘engagement’ score is displayed and her goal is to raise it by getting good feedback from customers. Gradually more and more screens are placed on her desk as she discovers she has to follow not only her customer queries but also streams of communication from the Circle hierarchy, her in-house social network and her outside social network. When she doesn’t spend enough time reading and posting on these it’s made clear to her (in a cringeworthy parody of ‘positive feedback sandwiches’) that her role isn’t just to do her job but to be ‘part of the Circle community’.
Mae has always had solitary kayaking as a way to escape from pressures in her work and family life.  When the now ubiquitous Circle webcams find her borrowing a kayak from her kayak centre out of hours to take a night sail across the bay she is hauled across the coals – in the gentlest, most constructive way of course – for her selfishness, first in private then in a public ‘inspirational talk’ with one of the Circle’s leaders.
“But this experience you had, you kept it to yourself. Which is curious, because you do share online. Your work at the Circle. Your PartiRank is in the 2K. So why do you think this particular hobby of yours, these extraordinary explorations, why hide these from the world? …. Okay, we just talked about how we, as humans, hide what we’re ashamed of. We do something illegal or unethical, and we hide it from the world, because we know it’s wrong.l But hiding something glorious, a wonderful trip on the water, the moonlight coming down, a shooting star ..”
I read the book at just the right moment when two streams of thought, which felt contradictory, were occupying my attention. On the one hand the Curatr mini-MOOC on Online Curation had me buzzing from one short, snappy read or video to another, “consuming content” as the expression goes, in a way I hadn’t seen myself do before. It also got me engaged with Twitter, which I’d always kept at arm’s length. It convinced me that some of my misgivings were mistaken and I learned ways of making it serve my purpose of learning and sharing. I found myself spending more time than I ever had before on Twitter and the sites the tweets led me to, in a fairly excitable way, not a dry methodical way. On the other hand, outside of that course I was  taking deliberate steps to fight distraction and protect concentrated attention – for example turning off email notifications and limiting the time I spent on it, using the Pomodoro method to block off  chunks of uninterrupted time.  So in one way, leaning toward focus, depth and attention; on the other, enjoying the buzz of social learning. In The Circle we see the social side taken to the extreme and the idea of protecting your mental space as socially threatening.
I’d recommend the book wholeheartedly.  Of course it’s an exaggeration – it’s fiction – and it’s not in the class of Orwell.  But Orwell was exaggerating trends he saw in society and holding up a warning flag. I believe Eggers is doing the same; with the slogans above he’s deliberately placing himself with Orwell, in the modern company of Jaron Lanier and others, as a prophet of warning.