In the 60s, American comics found their way to the UK as ballast on planes, nothing more. Often they were random packages of old and new ones. Some titles would be available new (actually about four months after their American publication), but there would be intermittent gaps in the supply.

There were only five or six of us in the school who collected Marvel Comics, and no-one else in town as far as we knew. We were regarded with some derision for reading comics at all.

The economy of Marvel collecting was based on trade (‘swapping’), but we fell into specialisations, where the aim was to have a ‘clear run’ of one’s favourite title from issue 1 to the current. For most titles this was impossible – first issues were hard to find even then. Sometimes one might give up a particular title and hand one’s straight run over to someone else in exchange for a number of comics that would bolster your other collections.

I kept mine in a wardrobe, piled with illustrated tabs of paper marking the end of one title and the beginning of another. I watched with satisfaction as the pile grew taller, became two piles, needed a second shelf. A friend kept his on a snooker table that slid out from under his bed. Another friend entered the market later than us, but had a paper round, which enabled him to buy whole collections for cash (which we were never comfortable about, but tolerated as it increased the number of our small band).

The specialist comic/scifi shop and the comics nerd of Simpsons fame, who stores his comics unopened in individual bags, were yet to be born. We were all enthusiasts who eagerly read every issue, debated the story and art and, in some cases, wrote and drew our own stories. We were proto-nerds.

‘Submariner’s getting his own mag!’

There must have been a growing wave of interest across the UK because in 1969 (I think), a selection of Marvel titles appeared with UK prices printed on them, rather than labelled on. This was the beginning of the UK comics retail business, although it would be some years before I would set foot in my first specialist comic shop.

Gradually and inevitably in the lives of young men, rock music and girls supplanted comics in our lives. (One harbinger of this was my noticing a sustained interest in a poster of female superhero The Wasp, which seemed to shine out from the muscle-bound stalwarts in the other posters around it. Hmmm.) Our group of friends and rivals stayed close but the competition to collect straight runs was replaced by the competition to master new chords on our new acoustic guitars. 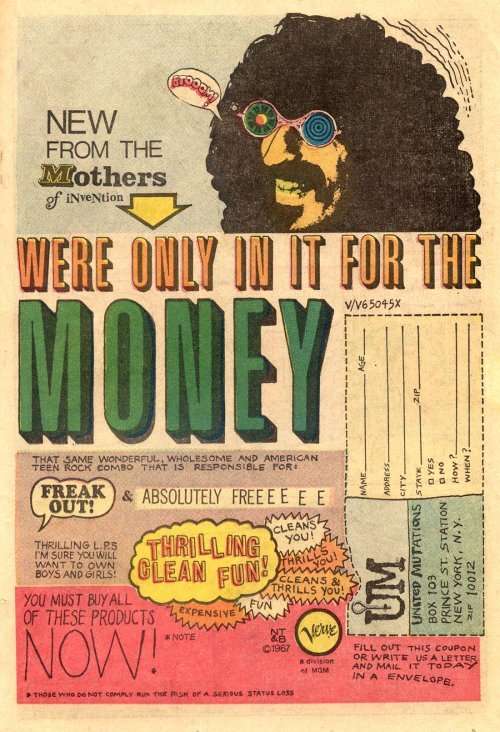 I’d been intrigued by an ad that had appeared in all Marvel comics in 1968. We all thought it was the funniest ad we’d ever seen, but we’d never heard of the Mothers of Invention. Looking back, it was the bridge between the two worlds of my adolescence.

I still wanted to be a Marvel artist, and submitted my portfolio to various art colleges, but while they recognised my skill at drawing muscular men in elaborate costumes and vehicles, they pointed out that skills at life drawing, painting and design were also required. I realised I was not destined for the Marvel Bullpen after all.