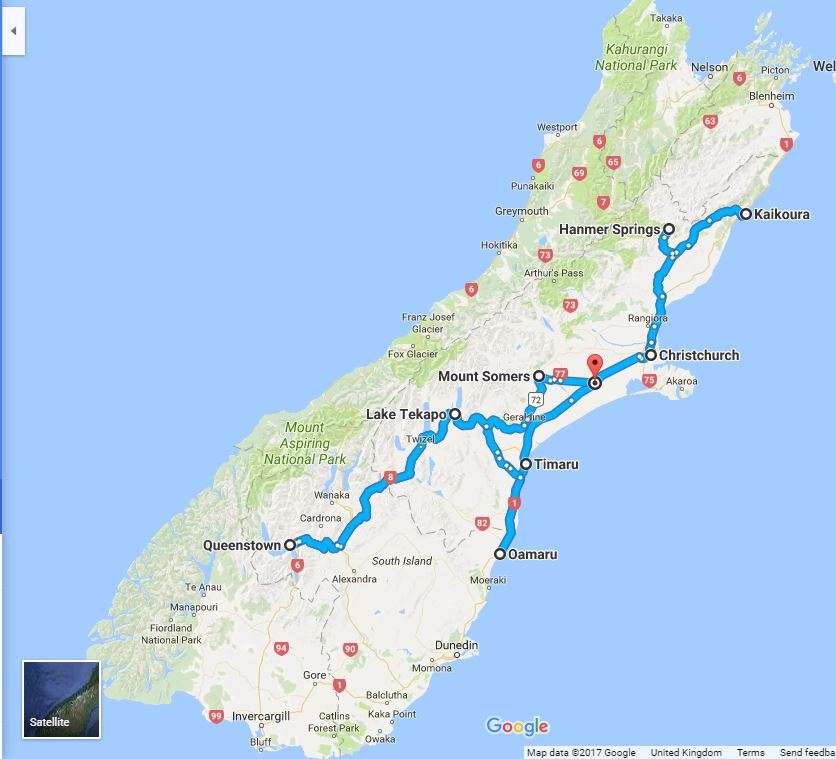 Before I continue with some stories and pictures from the South Island, here’s something I forgot about flying on New Zealand Air. On the video menu were a few short videos about driving in New Zealand – typically, stuff like driving on the left, giving way on one-lane bridges, allowing longer for your journey because roads are winding.  But there was one specifically for drivers from India. I was curious, so I had a look. What was it saying that would be so different? I should have known. I’ve never been to India, but I’ve seen plenty of film and TV of driving there. So the message of this New Zealand video was:

It said ‘if you’re used to driving in India you may find New Zealand different.’ I guess they must have had good reason to spend the money making a video like this.

Continuing our trip we flew from Wellington to Christchurch.  Picking up our car, a venerable Nissan Tilda, we headed north towards Kaikoura, where we’d booked a whale-watching expedition.  On the way we stopped at Hanmer Springs, a spa in alpine countryside, where we soaked in the hot pools disturbed only by some new age therapist monologuing the most ridiculous twaddle about ‘the space she was in’ and ‘the need to connect to some male energy’ to another woman who gave only the briefest of ‘uh-huh’ and ‘ok’ to punctuate the stream. From Hanmer Springs we took State Highway 7 to Kaikoura. The main highway from Christchurch to Kaikoura is the SH1, but it’s been closed just south of Kaikoura since an earthquake last year. All traffic – including massive delivery and construction vehicles, have to go by SH7, a mountain road not built for their weight. The inevitable result has been significant damage to SH7 and constant roadworks. We encountered road works every five or so minutes on our two-hour drive. Each was marshalled by a worker – often a young woman –  holding a Stop/Go lollipop and a walkie-talkie to the worker at the other end. We were waved through with a smile past the pothole repair teams – unless we went too fast, in which we got an angry three fingers (meaning 30kph). 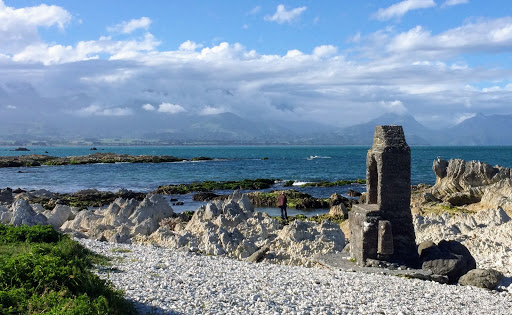 Kaikoura sits in a beautiful bay surrounded by snowy peaks. Our hotel turned out to be well out of town to the north, but it wasn’t very prepossessing, so we dropped the bags and drove straight back into town. Driving to the south end we found strange wavy rock formations and a number of seal colonies. We enjoyed some drinks and chips in the CrayPot while the barman regaled us with earthquake stories, the last one having been last week! 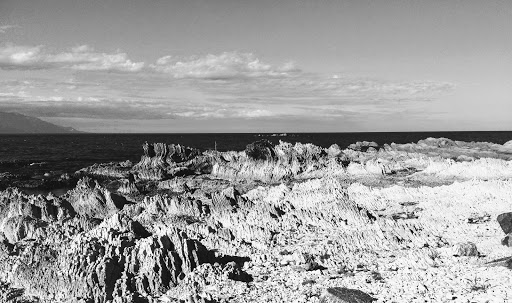 After an early night we had breakfast in the same bar, fresh fruit and muesli, and went for our whale-watching expedition which was … cancelled! The whales were well outside the range of the boat today, and despite looking very calm in the bay, gale force winds were forecast out at sea. We were offered transfer to another day, which we couldn’t do, or a full refund. An interesting distraction was constantly being buzzed by military helicopters who were conducting exercises from a carrier moored out in the bay. Apparently an exercise simulating the unlikely event of New Zealand invading another country? Right.

After another look at the seal colonies, we set off back to Christchurch. SH7 was a bit easier now that we knew what to expect.

At Christchurch we checked into Sherbourne Motor Lodge, 20m walk from the city centre, very pleasant, well looked after and spacious.

We were last in Christchurch in 2013, two years after the earthquake that devastated the centre. Then it was a ghost town, with the little cluster of shops improvised from shipping containers being the only source of food, colour, shopping and wifi. Now the centre was a huge series of building sites. It has taken all this time to safely demolish or support the damaged buildings, as well as commissioning, designing and starting the renaissance. The quaint little tram tour showed us newly built shopping and office streets, as well as some structures, such as the Cathedral, whose reconstruction is yet to come. 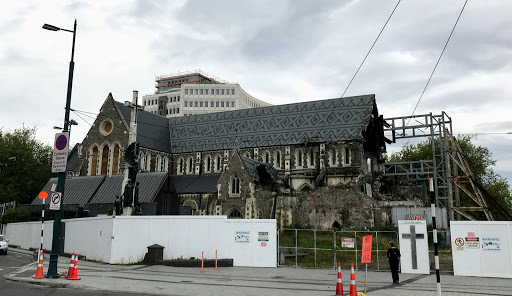 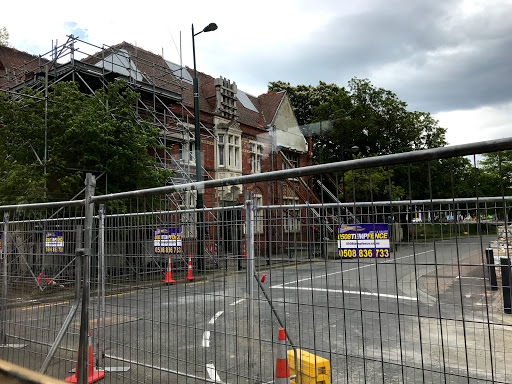 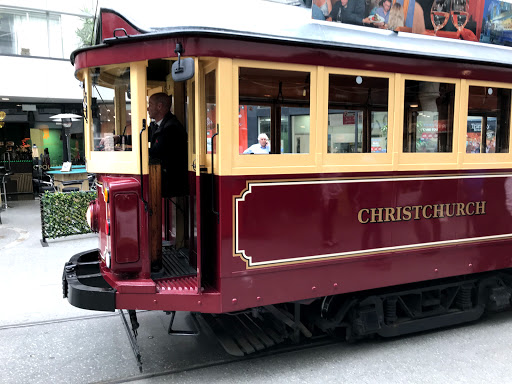 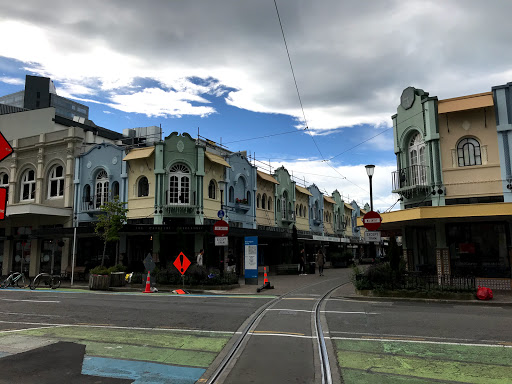 Next day we drove down SH1 to Timaru. It was a straight three-hour drive, but by straight I mean straight! Hardly a curve in the road, very monotonous, even dangerously so. Give us a turn, give us a hill, anything PLEASE!

Our hotel in Timaru was the Grosvenor. It’s a formerly high-class establishment, now elegantly fading. The owners have sought to brighten it up with some curious attempts at copies of modern art, from Mondrian to Banksy, as murals on the walls. Our corridor ran along to a misshapen colourful portrait of Winston Churchill. We enjoyed a walk in Caroline Park, with its lovely rose garden.

We decided to drive on an hour or so to Oamaru where there was a penguin colony and, we’d been told, something to do with steampunk. What we found was this.


We arrived just after the building closed but were able to enjoy the constructions, which belch flame and smoke on dropping a dollar into a slot.  Oamaru is described in the Lonely Planet guide as the coolest town in New Zealand, mainly for its well-preserved Victorian quarter, and thriving artists communities.

One delight we did get to see for five minutes before it closed was the Grainstore Gallery, run by artist Donna Demente. A treasure trove of subverted antiques, overlooked everywhere by her trademark Renaissance eyes. 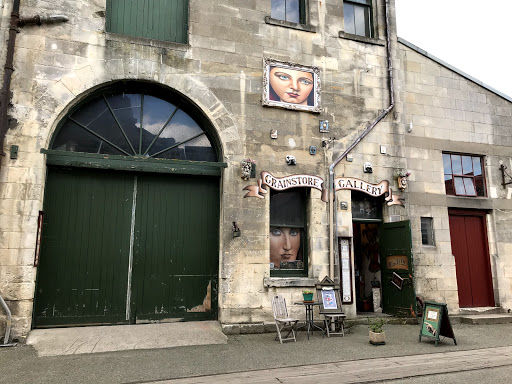 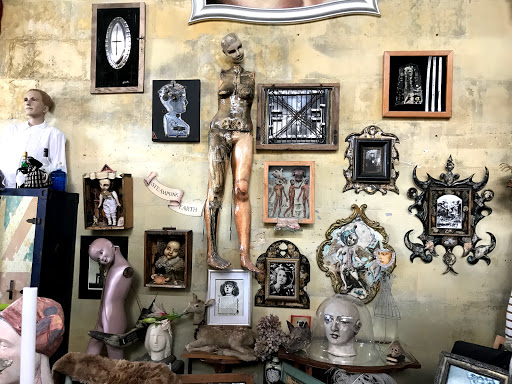 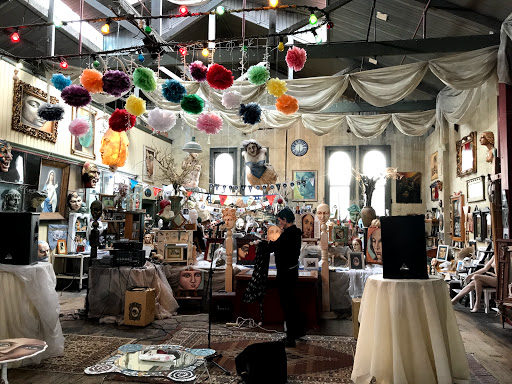 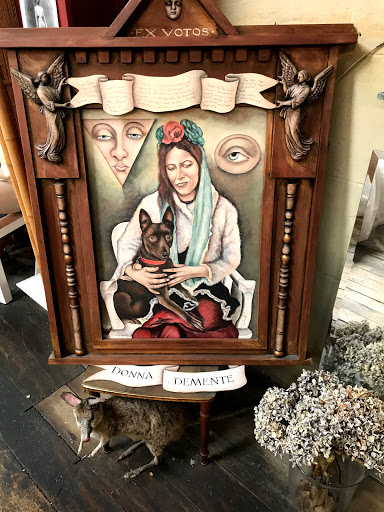 We couldn’t stay to watch the penguins nighttime march, as we weren’t equipped for night driving (we’d stupidly brought only sunglasses) so we headed back to Timaru and went to see Thor: Ragnarok. (The most unbelievable notion of the whole holiday – getting my wife to a Marvel film!) Leaving the cinema we noticed how everything in NZ seems to close much earlier than at home – no bars or restaurants in Timaru were open just after 10, and that seemed to be the pattern elsewhere.

In the morning we headed for Lake Tekapo, the highlight of our last visit to the South Island, stopping briefly in Geraldine, but this time managing without viewing the World’s Largest Jumper. Tekapo did not disappoint. Turquoise blue water surrounded by snowy peaks, today with a bank of mist. Stunning. The glaciers in the headwaters of Lake Tekapo grind rock into a fine dust on their journey down towards the lake. This rock flour is suspended in the water and causes the magnificent turquoise. 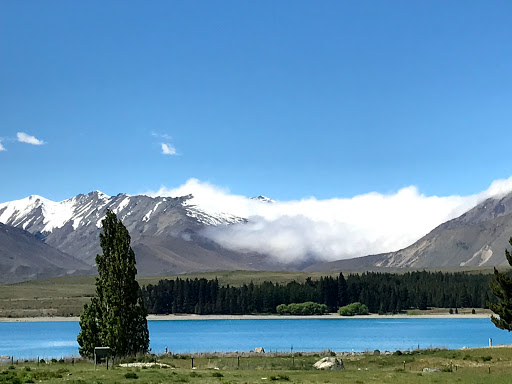 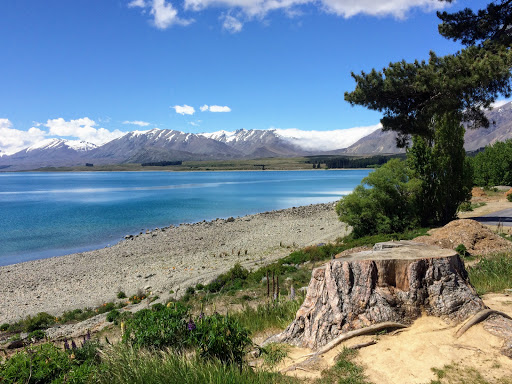 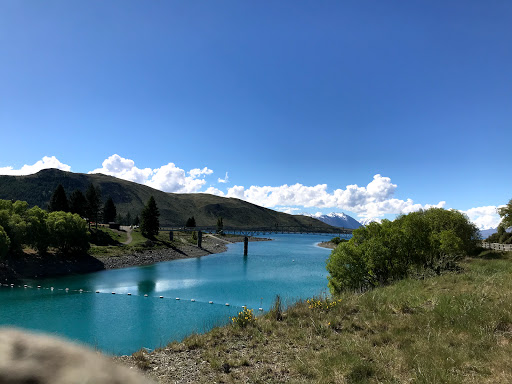 We stayed a night there and drove off to Queenstown stopping briefly at Lake Pukaki for more amazing scenery.

In Queenstown the Coronation Lodge hotel gave us a free upgrade from a double room to a luxury apartment with kitchen, bedroom, two balconies and even a washing machine and dryer, which we were just about ready for. We stayed there for three nights. The highlight of the stay – for me the highlight of the holiday – was a 40m flight in an eight-seater plane over the razor-topped Southern Alps to Milford Sound where we sailed the fjord gazing at waterfalls and immense cliffs. 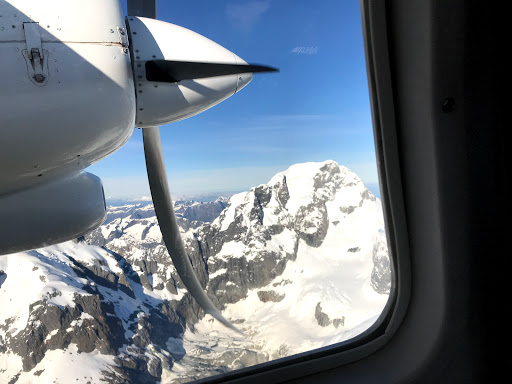 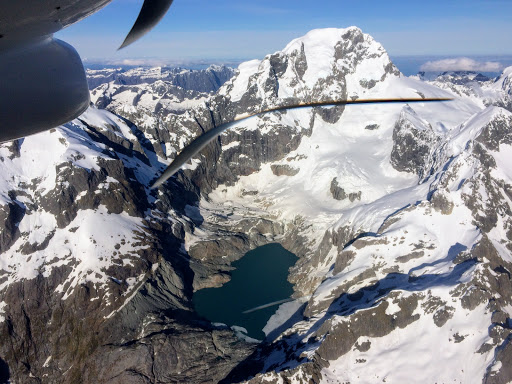 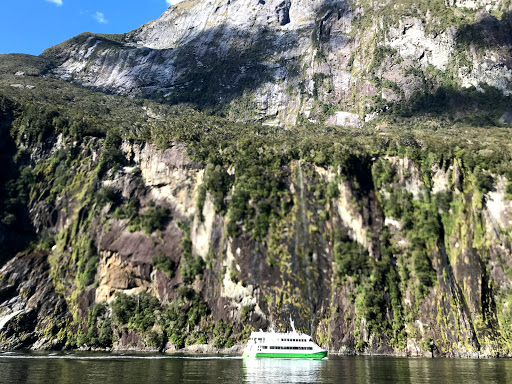 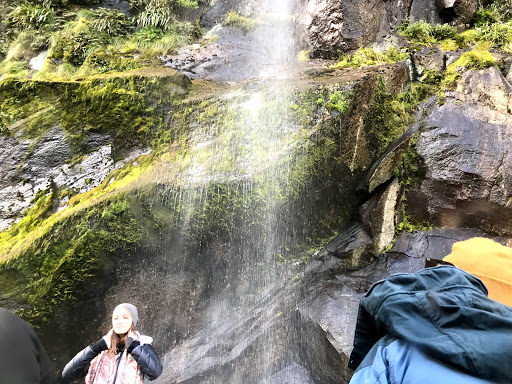 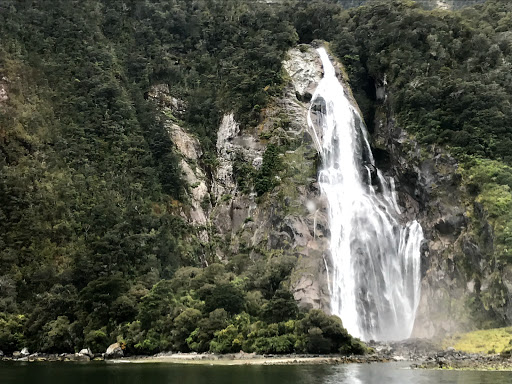 On the flight back we stopped over near Glenorchy, landing in a field to take two passengers to their next destination, close to where the drama series Top Of The Lake was filmed. 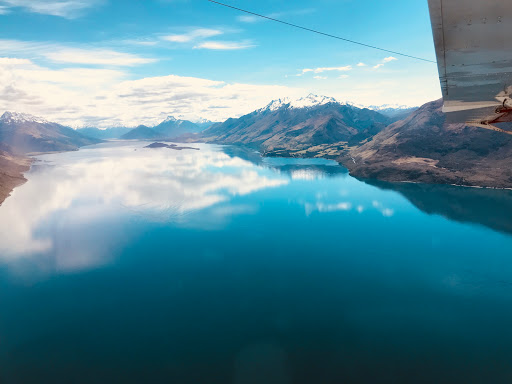 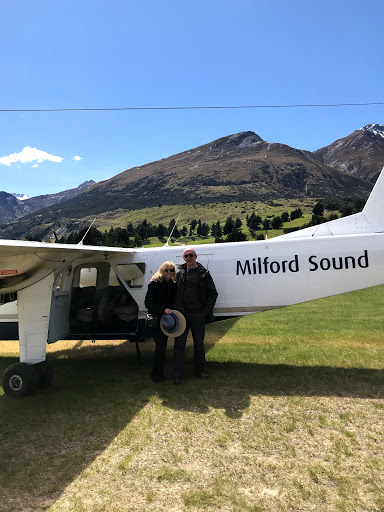 The next day I got to recreate one of the highlights of my first NZ visit – the luge! It’s basically a tray on wheels with a steering column which also serves as a brake. You sit in it and hurtle down a concrete track, then you get in a skilift back to the top and do it again. And again. Here you can see me almost overtaking a twelve-year-old, such was my skill and fearlessness. 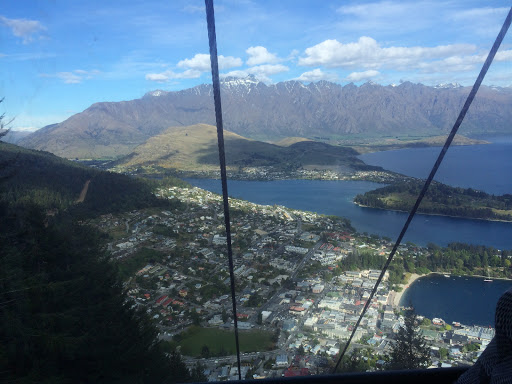 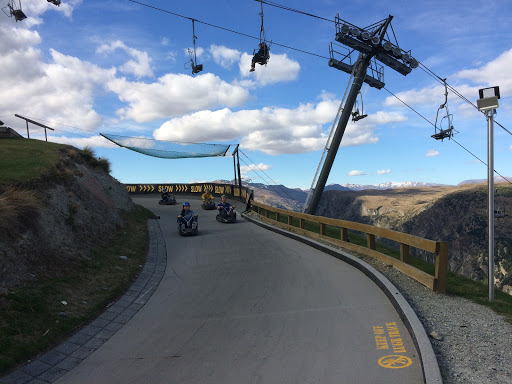 A more leisurely time was had on our last day, buying gifts and taking a cruise on the lake. The lake apparently is purer than distilled water and, as such, doesn’t conduct electricity. There’s a useless fact.

Queenstown to home via Santa Barbara

The next day we had a long drive back to Christchurch, where we stayed at the same motel as before. We wandered the centre, and the Container Village rather sadly on the morning of our departure, reluctant to get in the car and drive to the airport.

On the plane to LA, I watched a quirky New Zealand comedy Darryl – An Outward Bound Story, and then the much darker Handmaid’s Tale. I’m not one for binge-watching, in fact planes are the only place I can watch more than two episodes of anything.

In Santa Barbara we caught up with old friends Andy and Deborah and their senior citizen collie Emma. We went sailing in the bay and wine-tasting in the hills. It was glorious. 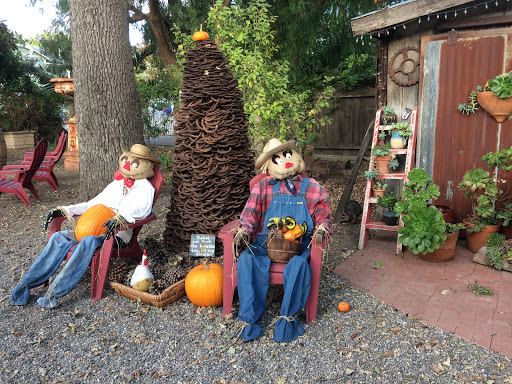 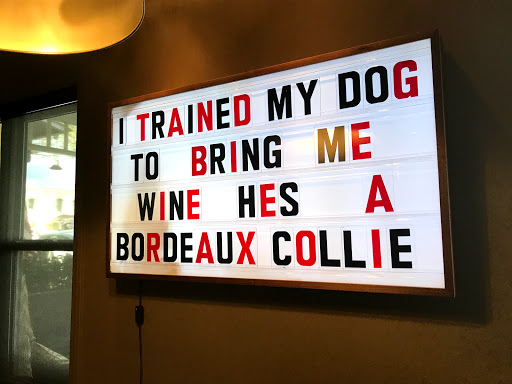 Finally here’s a little piece of footage I took on my phone as Andy drove us down from looking at the Chumash Painted Cave in the hills outside Santa Barbara, set to an instrumental of mine called Joyride.

Part 1 of our New Zealand Road Trip is here.