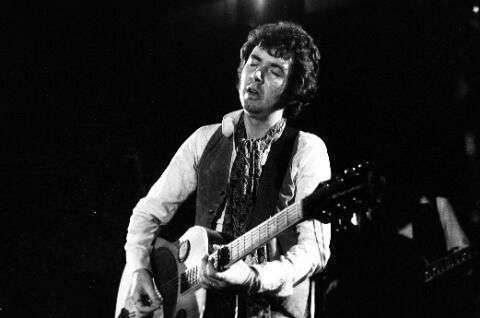 Throughout his short life Ronnie Lane’s warmth and sparkle endeared audiences – and musicians – to him. From quirky pop star with the Small Faces, to stadium rock with the Faces to rustic troubador in a circus tent, he went his own way.

The Passing Show comes to Falkirk

Ronnie Lane’s Passing Show, his rock’n’roll circus, gave me one of the most magical nights I’ve ever had at a gig. It fetched up in Falkirk, on a green in the town centre, one evening in 1974. I had seen one of the few adverts and was among the small audience who turned up under the big top for a range of acoustic support acts, ringmaster, dancing girls and clowns, followed by Ronnie’s band. I’ve been to many gigs where the love generated from audience to performer was almost tangible, but this was one where audience and performer were joined in joy at the sheer delight and craziness of being together under canvas, smelling the grass (not that kind of grass this time), and knowing that tomorrow, just about no-one else will believe this.

Little Ronnie, a huge acoustic strapped round him, glittered in the lights and his unstoppable grin filled the tent. I had to leave before the end for the last train to Glasgow and as I dragged myself to the tent door, I looked back at him and knew that I was a Ronnie Lane fan forever.

Ronnie Lane was not a tall man. Neither was Steve Marriott. They named their band for the fact that nobody was over 5 1/2 feet.  Stardom didn’t take long to come to them in the 60s, with their anthemic hits like Itchycoo Park and All Or Nothing. When Marriott left in 1969, Lane and keyboard player Ian McLagan hooked up with Rod Stewart and Ronnie Wood to form The Faces. Again success was quick in coming. From being John Peel’s favourite band (this in the era dominated by prog then glam), they went on to megastardom and stadium tours. Lane could be seen side-shuffling away in the back with his bass draped round his tiny frame and a half-smoked cigarette attached to his lips, as Stewart played to the gallery. 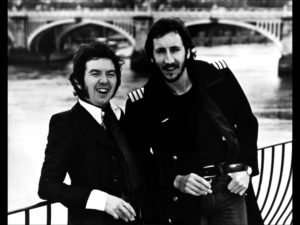 The thrill of the premier league didn’t satisfy him for long and he started attending a group that studied the teaching of Meher Baba, an Indian spiritual teacher who maintained silence but taught by means of notes and hand gestures. His was a strong anti-drug message and appealed to Lane and fellow devotee Pete Townshend. But the benefits of discipleship weren’t all spiritual: in 1972 he left his wife and eloped with a fellow devotee Kate McInnery. Under influence of Kate, Lane dropped his trademark sharp Mod suits and haircuts for a gypsy chic – bangles, scarfs, waistcoats. More significantly, he left the Faces.

Moving to a farm near the English-Welsh border, Lane sunk his Faces money into two projects: the Ronnie Lane mobile studio and Passing Show. He bought the studio at first so he could record at the farm, gathering a bunch of friends who could live in, enjoy rustic life and spend the day drinking and recording. This was the ethos of his band Slim Chance. Many of the key players in 1970s music recorded albums in the Mobile, from The Who to Led Zeppelin. This was one of the few financial successes in Lane’s life.

For Slim Chance’s American keyboard player, Billy Livsey, life on the farm was a huge culture shock. “It was very ramshackle,” he says. “Kate was like the hippie mom. She looked like she came out of a Grateful Dead concert. She was always making stews, and there were all these kids running around.” Some band-members had brought their entire families.
Gallagher & Lyle turned up and couldn’t believe their eyes. Lyle: “It was a real commune attitude. Kate would be washing the clothes in a tub and putting them through a mangle. An
enormous cauldron of soup sat on the fire from day to day.” Livsey: “We recorded the albumin a barn, surrounded by hay bales. The piano was out of tune half the time. We’d have a few
pints in the pub, then wander back and start playing.” (David Cavanagh article on the Passing Show)

Now Lane and Kate set about realising their dream of a rock-and-roll circus.

The Passing Show tour of 1974 has entered the annals as one of the most heroically ill-judged attempts to enliven the traditional touring model. Determined to take a Romany caravan across the English countryside, Lane rolled into towns with a rag-tag group of musicians, jugglers, fire-eaters, dancing girls and what he described as “the world’s unfunniest clowns”. He pitched his Big Top tent and watched his money disappear. (Guardian article on Ronnie Lane)

The big names he’d planned to include – Vivian Stanshall and Gallagher and Lyle –  pulled out (or in Stanshall’s case were shown the door) for one reason or another. Managing local regulations and council permissions to put the show on was a nightmare, and publicity was poor. The trucks were old and clapped out – one dating from 1938 – and the generators regularly failed.

The tour was a disaster for Ronnie himself and a financial black hole.

The idea of a tent is such a romantic thing. It’s there one day and gone the next. You can chuck up such an illusion in that time and space. I want to do that. I want people to remember it. Even when it’s just a stained patch on the grass.
(Ronnie Lane)

These are some of the few photos of the Passing Show, from the  Slim Chance website. 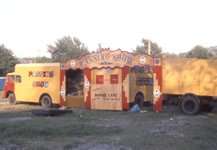 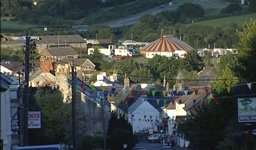 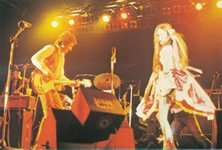 The end of the road

But the tour eventually ran out of luck. It was abandoned in Newcastle, where, over three
nights, Slim Chance played to a total of 30 people. Ronnie had spent thousands keeping it afloat, as had Bruce Rowland. “I lost about four-and-a-half grand, a lot of money in those days,” Rowland says. “Everything was broken and we had to bring it home. I took a 40-foot caravan down the M1 with a Land Rover, then went back to Newcastle on the train and drove the Pantechnicon down. It had two gears, no reverse, back brakes only, and no starter. I drove between 5mph and 10mph most of the way. It took me three days.” (Kavanagh article)

I think the best music Ronnie ever recorded was on Anymore for Anymore, great songs and some of them had been hanging around for years and didn’t fit with the Faces. It presented Ronnie’s talents in the best possible light, a form of English folk infused with hints of Dylan, bluegrass and cajun. It was recorded al fresco with the sound of the wind on the mikes.
(Russ Schlagbaum, Slim Chance road manager)

Ronnie Lane’s Slim Chance had two hits, How Come and The Poacher. They released three albums – Anymore for Anymore, Ronnie Lane’s Slim Chance and One For The Road – to declining sales. When he was dropped by Island, he still had a contractual obligation to Atlantic Records from the Small Faces days. His friend and fellow Meher Baba follower, Pete Townshend suggested they do an album together. It retained the rustic feel of Lane’s albums, with the exception of Street In the City, scored for strings. Released in 1977, it’s been consistently rated as one of the best of both Lane’s and Townshend’s career. During the making of the album, Lane was wobbly on his feet; Townshend thought it was due to alcohol, but it was the beginning of Lane’s multiple sclerosis, which he’d tried to cover up – it had occurred several times in his family and he was terrified of inheriting it. 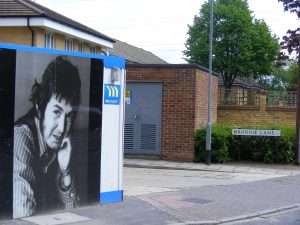 Lane’s health gradually deteriorated. In 1983 Eric Clapton and others performed in a fund-raising concert for the MS charity ARMS at the Albert Hall. Lane moved to Austin, Texas in 1984, for a warmer climate, where he continued to perform. He was always short of money – royalties from the Small Faces, which would have been substantial, were held up in legal wrangles until after his death. The ARMS charity fundraising was tarnished by fraud. Lane was not a suspect, but it made it harder to fund his treatment. His celebrity friends, including Jimmy Page, Rod Stewart and Ronnie Wood are said to have funded his medical care until his death in 1997 in Colorado. He was 51.

Many artists have paid tribute to him over the years, including Paul Weller and Ocean Colour Scene. The mid-70s lineup of Slim Chance still performs, keeping Lane’s songs alive.

On Mike Heron’s solo album Smiling Men With Bad Reputations, Ronnie plays bass on Warm Heart Pastry, along with Pete Townshend and Keith Moon, as ‘Tommy and the Bijoux’.

Here’s one of Lane’s most poignant songs, from the album with Pete Townshend, Rough Mix.

Here are a few more favourites, but in all honesty I’d say just listen to the whole of Anymore For Anymore.