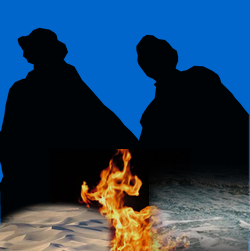 I’ve probably never been as fanatical a fan of any musicians as I was of the Incredible String Band. They were that kind of band, polarising concertgoers and audients between adulation and complete incomprehension. In 2003 my friend Adrian put out a book about the band, and invited me to play at the London launch. Rather than play complete songs (some could stretch to 15m) I ran together a couple of sets of my favourite bits, which I later recorded in one take with Gil Murray.

While I still have a lot of respect and affection for the String Band, I think I probably worked the fanboy out my system during all this.

I’ve added to the two parts of the medley a couple of other tracks. Wild Sea was originally just a snippet at the end of Robin Williamson’s song Creation on the Changing Horses album. Gil and I recorded it the same evening as the main medley.

Spirit Beautiful was recorded a few years previously for an American tribute album; it’s a Mike Heron song from his album Smiling Men With Bad Reputations, and I had Mike’s percussionist Dave Haswell on the session.

4 thoughts on “I Remember It All from Before”