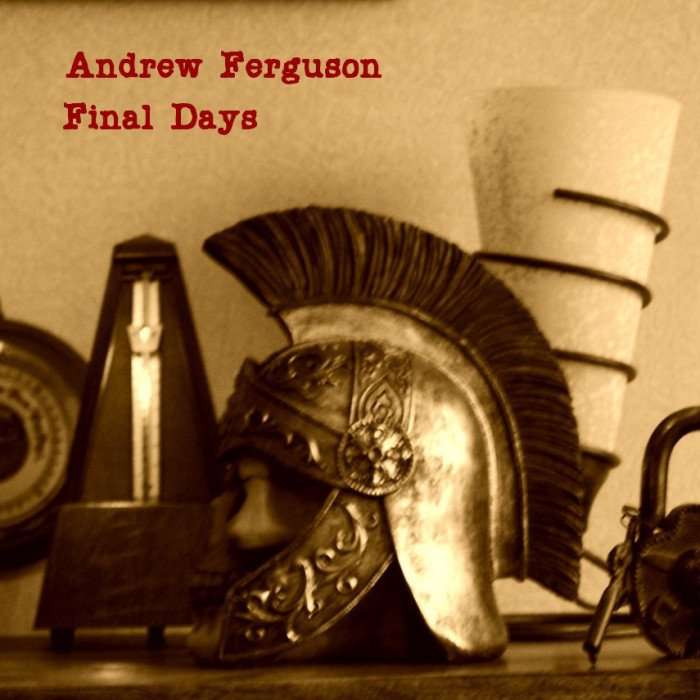 Andrew C Ferguson has been a friend for a few years since he invited us to play at tribute nights to Dylan, Nick Cave and Springsteen. Already well established on the spoken-word scene, in recent years he’s branched out into crime novels and a series of diverse musical projects. He plays guitar in country-punk band Isaac Brutal. In A Tribute to Venus Carmichael he curates songs sent on cassette from a ‘lost’ 60s Scottish singer-songwriter in California. He went solo with Songs in a Scottish Accent. His new album Final Days is the followup.

To these ears it works best when Andrew wears his influences more lightly. We know his influences because he writes extensively in his blog about them and about his songs. So the title track opens the album with Leonard Cohen’s ‘four in the morning and things are getting grim’ ambience and a tune he must have left hanging next to one of his suits; but there’s still a wry smile to his voice. That’s immediately followed by a more uplifting Dylan sound from around New Morning in Cicero’s Blues – ‘Sometimes to pick yourself up off the floor takes a different kind of strong’.

With those manifesto statements out the way, the following tracks sound both more personal and more original. Songs of Innocence is as wistful as the title suggests, reflecting on the past ‘several lifetimes ago, so many things you don’t know you don’t know’. He then steps aside to let his characters narrate the next two songs – The Ballad of the IX Hispana, from the viewpoint of a lonely, tired footsoldier the Roman legion thought to have disappeared from history after encountering the natives of Britain, and It’s All Gravy, the kind of pub conversation you don’t want to find yourself in. “Bag o’ pills, knife in my hand, nothing really went to plan”.


The highlight of the album for me is You’ll Be Hearing From Me (the title’s another Cohenism) in which his gruff voice lists the things he likes over a decidedly quirky set of drum loops. It makes a welcome contrast both for its relatively guitar-free arrangement and its sheer panache.


Due Ceremony is another spoken word piece centring on a funeral underpinned by a violin playing Ye Banks and Braes. Theory of Everything is a reflection on a live lived, evocative and easily understood by those of us on the other side of 50, at least. Same lyrical territory as Songs of Innocence but somehow more personal. But Andrew, why so world weary when you’re not even old!

Andrew pulls a surprise by bringing in Isaac Brutal’s singer, Emma Gow, to close the album with a fine song in a Springsteen-country vein, Scale of One to Ten. (This song also appears on Isaac Brutal’s album)

Andrew’s written about the album himself here (https://andrewcferguson.com/final-days-album/) it’s free, only asking that you made a donation of whatever size you want to a charity. Each set of songs Andrew produces gets better and I look forward to the next one!