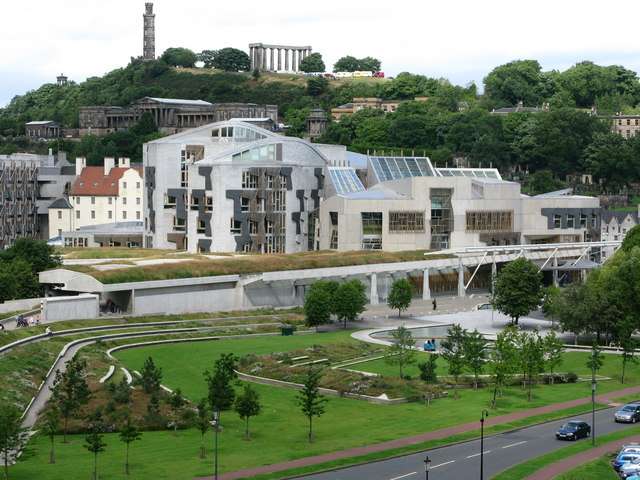 This is an exercise I was given by my guitar/composition tutor Ged Brockie. It was based on a piece of work he was commissioned to do for the opening of the Scottish Parliament building. He originally created an orchestrated version, then replaced that with a lighter, guitar-based composition.

For this exercise we simply removed his track and I went through the process of composing a new piece.

I used parts of an old song of mine from the 90s as the basis. It was called Grey Stone and was about Arthur’s Seat and Salisbury Crags in Edinburgh, from which you can now see the Parliament building. The chorus tries to evoke the grandeur of the park and the hill, while the verse is a kind of call-and-response to represent discussion and conversation in the Parliament. I put those themes through many key changes, rhythm changes, modulations and changes of instrumentation. I also had to compose two new sections for the interior including the introspective shots of the MSPs’ offices and the long journey through the corridors to the debating chamber.

That part was the biggest challenge as it takes quite a long time. At first I used a repeating chord sequence, adding on instruments and countermelodies as it progressed but it didn’t ‘catch a fire’. Then I shifted to using only percussion, using a pattern I’d learned on the lessons I’m following about the Indian Konnakol method (Mastering Rhythm with Konnakol) ; the patters is called tihai and goes through a sequence of 7 beats, 6 beats, 5 and so on. That achieved my aim of being slightly unsettling but was a bit stark so I added cello and viola parts. In the end I took out the drums at the beginning, leaving only the cello and viola.

I then got feedback from a few producer and composer friends and went through many iterations to get it sounding clearer and more realistic. I haven’t succeeded as far as I’d have liked but I do think I’ve done a good job for my stage of development and experience in this area.