Not a political song as such, but one arising from the current state of play.

On the drive home from a rehearsal I was chewing over an explanation I’d read of why I and so many friends have been so shaken by Brexit and Trump and all that. The article (not in the public domain) looked at the idea of the ‘progressive’ as someone who believed in progress, i.e. that over the span of history things will get ‘better’. Better as in more liberty, more democracy, more compassion, more equality, less conflict etc – so ‘better’ in the aspirational vision of those who believe in it. It’s not just a hope or a dream, it’s where history is ultimately heading.

I remember discussing with a Marxist friend many years ago her belief that Marxist economics was a science as ‘hard’ as physics or biology, and that a state I could only describe as utopian was as inevitable as the law of gravity, except that there would be a lot of suffering on the way. There was no question of human nature messing it up, as ‘human nature’ was a construct that didn’t exist – people will be what they are educated to be, so once the right people are in charge of education … you get the picture.

I think for some, the arrival of Trump and Brexit, and the popular surge that created them, challenge the very idea of progress that they’ve built their belief systems on.  That’s what I had the stupid idea of trying to shoehorn into a pop song.

Mixed up in there is the Norwegian story of the Lindworm Prince, another tale of how the world turns out not as we thought it should, but interestingly, is redeemed when we look honestly at what it is without the layers of stories we build. 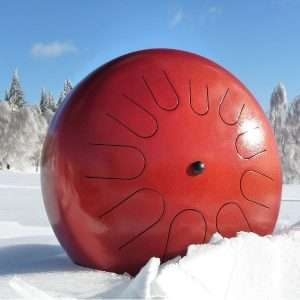 That particular weekend I’d practically lost my voice, so I realised I’d have to either record it in a ‘talking’ voice or record teh backing and put the completion off till later. I was afraid I’d go off it so I did a hasty recording. It turned out way too long, so I’ve edited out a verse. The main instrument, apart from various drum loops from looploft.com, is the Zagdrum, which I’m spending more and more time playing. I’ve made lots of instrumentals with it but not used it much in songs till now.