This is the start of a quest.

In the mid-1980s I was living in Manchester. During this time I got to know a singer called Di Williams. She first came along to a folk club I ran with Lynne Percival at the Lamplight Club in Chorlton. She seemed a slightly eccentric figure, in charity shop clothes and a shy gaze, but when she sang it was with the authority of someone who held a place in a folk tradition. She accompanied herself on untutored fiddle, simple guitar or, in most cases, nothing but the quiet power of her voice. The Lamplight was an early open mic, drawing young arty people who wanted to make an impression, but Di seemed slightly outside of all that, a woman who didn’t care about image or ambition. 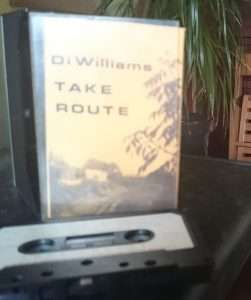 In 1983 she asked me to play on a few tracks for an album she was recording. She was working with an excellent guitarist, Dave Chisholm, who provided most of the backing. She used me on guitar and bass and a few other friends on fretless bass, mandolin and percussion here and there. We must have recorded some elements of it on my Portastudio 144, as I remember having Di and Dave up there, but other sessions were held in the huge recording room at BBC Manchester in Oxford Road, where her brother Alan was a recording engineer.

Alan produced the final album, Take Route, in cassette form only, which was the norm at the time. I remember playing a few gigs with her and Dave, notably supporting John Cooper Clarke at one venue.  Clarke was the antithesis of his image – friendly, quiet-spoken and gentle, until the shades went on and he walked on stage sneering and snarling as the persona took over.

In 1987 I left Manchester and I never heard from, or of, Di again. As the internet became available I would occasionally try to find her online but never succeeded. But time and again I was drawn back to her songs, and often thought I’d like to do covers of some. (I did attempt a couple on the Portastudio before I left, but they weren’t good enough.)

And so it went until a couple of months ago when I got an email from Hil Bichovsky, a Manchester singer who’d tried to trace some of the musicians on Di’s cassette sleeve. Di had passed away, although Hil didn’t know when, and she loved Di’s songs and wanted to create some online presence for her so they wouldn’t be forgotten.

We’re going to create a website around the album and hope that somehow we reach people who knew her and can fill in a bit of her story. We don’t even have a photo.  As a taster, here’s the opening track from Take Route, Kept Silence.

If you’d like to help or can provide any information about Di or her work, please contact me on the form below or Hil Bichovsky via her Bandcamp site. To be continued …