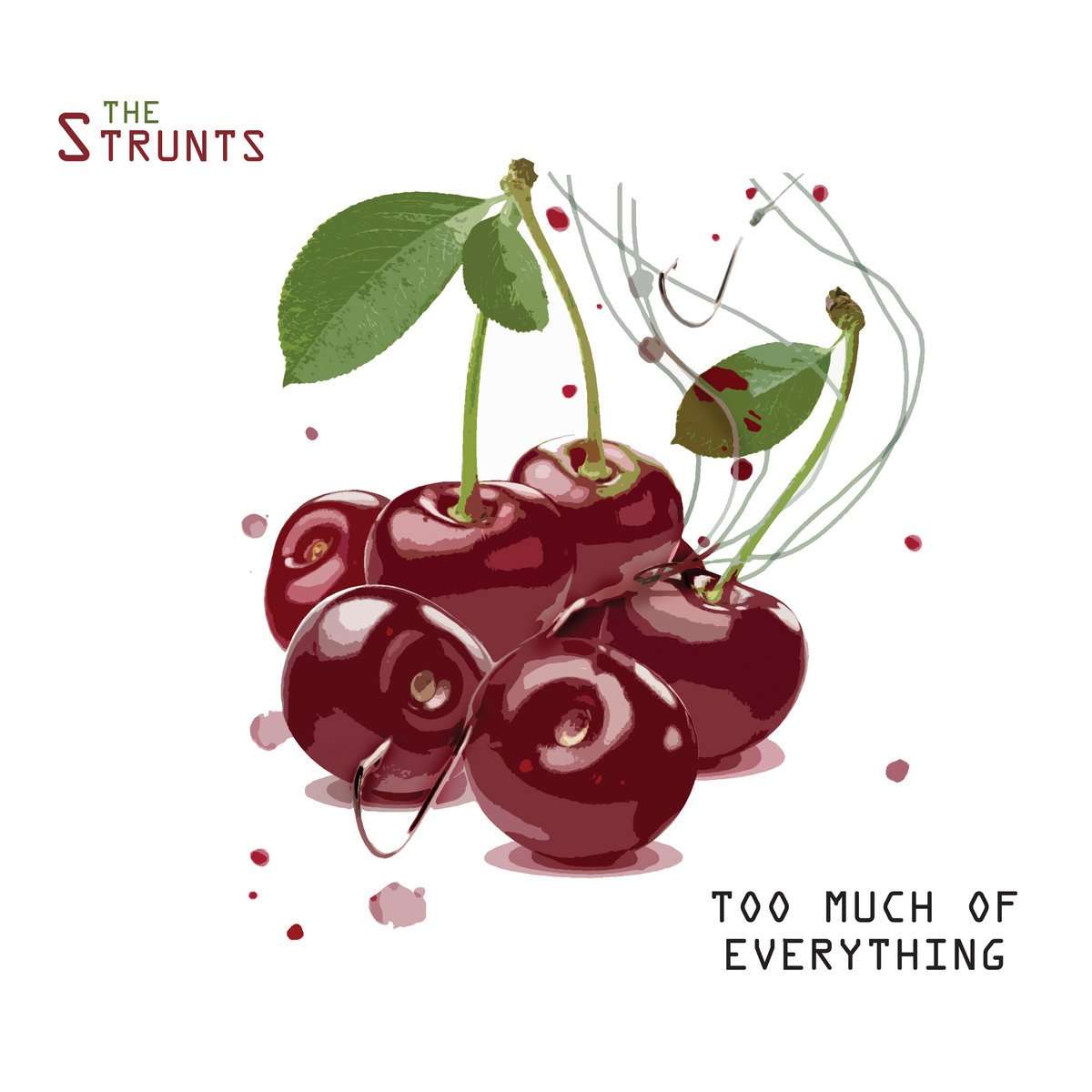 I haven’t had any new stuff to share with you. I’m still working on the November song in my series of new songs for email subscribers, but in the meantime here’s some good music that friends of mine have sent me.

Let me just say here and now that I’m not looking for people to send me music, I don’t write reviews as a matter of course, and I don’t often listen to anything new! The friends who sent me this music weren’t looking for a writeup, in fact they don’t know I’m doing this, but I just thought I’d like to bring some good music – that you’d’ probably never hear otherwise – to your attention.

The Strunts – Too Much of Everything

The Strunts are based in Campbeltown, Argyll – yes, where Macca had his farm – and are a live gigging band playing the songs of the co-writers David Fee and Les Oman. Too Much of Everything is their new album – upbeat, energetic folk rock driven by guitar, mandolin and bouzouki and a strong rhythm section (yes real drums!).

The songwriting reminds me of 1980s-90s, Elvis Costello in particular. Many of the songs have political themes of a vaguely liberal-angst nature: the world going to hell in a handbasket due to consumerism, corruption and greed.

The songs are instantly catchy and memorable, with choruses upfront, strong male harmonies on most and one standout female lead by Alison Leith on Alien in Slovenia.

Towards the end of the album, the pace eases a little. Like Minds is atmospheric and pensive with the singer ‘reaching out for like minds’. Weaver’s Bay is more trad-folky than the others, a song about the clearances and forced emigration. The title track Too Much of Everything is tender, perhaps narrated by the emigrants of Weaver’s Bay from their new home in the USA.

The CD comes nicely packaged with a lyric sheet.

What’s a strunt? I wondered that too. According to the sleeve it’s a fit of pettishness, the huffs, the sulks. So now you know.

Too Much of Everything on Bandcamp

Jim Bryce – A Kind of Circle

This album, by Edinburgh actor/singer/songwriter Jim Bryce is ambitious in scope and execution. It’s the work of a lifetime, its songs covering the span of a lifetime. Jim plays all the instruments bar drums on one track, and composed the quirky and intricate arrangements that feature in some of the songs, brought to life by Gerry Callaghan’s sensitive production. Reference points? There are echoes of cabaret, Randy Newman (without the accent), Scott Walker of the 1970s and even Ray Davies.

If the opener, Living Through your Metaphors seems over-wrought, depending on your tastes, with the angst of being thrown into the world – we tip straight into  humour with Five Year Old  – perceptive and unexpected glimpses of the world from a child’s viewpoint leading to more of the same – with added testosterone and lager – in 16.

The album’s centrepiece is the nine-minute Celebration, a forensic pulling apart of a wedding and marriage (‘the jukebox plays a song about a love that never dies and – no surprise – you’d thought you’d try.’)

At The Last is a tender song of an elderly lover (‘Will you still walk with me along this final mile?’)

The album ends with no less than four profound songs on aspects of death – Ward, Yer Song, Track 13 and Breathing, a more upbeat closer that echoes the opening track.

This isn’t a random collection of songs but a serious and considered album experience, made approachable by the humour woven through it.

A Kind of Circle on Bandcamp

Andrew Ferguson (as SIASA) – Heading for the Heartlands

This is a three-song collection of country/Americana delivered in Andrew’s crusty Fife accent (SIASA refers to his performing alias Songs in a Scottish Accent). I’ve watched as Andrew has honed his arranging and production skills over the years and here he creates a lovely sound, reminiscent of Springsteen’s Ghost of Tom Joad.

Like the Boss, Andrew writes songs of everyday people, simple and heartfelt, sung in an honest voice that sounds always at the edge of breaking up. The opener Heartlands is pleasant, but the real feeling for me is in the two following tracks. my favourite is Leaving Time: with simple picked guitar over an ambient drone, it explores the feelings of leaving a long-cherished home. Copper Wire has more drive and energy, about a man hitting hard times (‘Never dreamed this was my destiny, collecting copper wire.’). I’m in the backing choir, but the final Springsteen touch is a few saxophone flourishes on the way out.

Heading for the Heartlands on Bandcamp

What to say about this? Virtuoso bassist David ‘Bobo’ Lavorgna has passed his time in isolation producing every kind of genre from dance, to ambient drone to hard rock, to jazz and even comic dialogues. There are 30 tracks here between the two albums and it’s a total lucky-dip. You never know what you’ll get and the titles don’t give much away – take a dip!

Light at the End of the Tunnel on Bandcamp

The Covid 19 Sessions on Bandcamp