My first guitar was probably my first love too.

The guitar had always been part of my fantasy life. I’d first seen it on the One O’Clock Gang, as a suave gentleman with a pencil moustache and a knowing half-smile stroked jazz standards from a large semi-acoustic with f-holes and gleaming dials and pickups, still glamorous through the murky black and white of Scottish Television circa 1958.  On my endless daily shopping afternoons with mum and gran, however, I’d linger outside the music shop, in awe at the carefully-lit beauties in the window, polished to perfection, in dizzying colour. What did those dials and switches do? 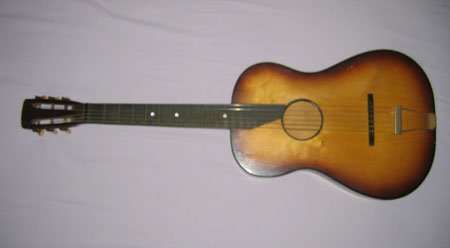 When I was 9, the Beatles swept into the media followed by their train of ‘beat group’ agitators. Again, guitars were everywhere. I would draw them, play imaginary ones and drool over guitars in catalogues.  I don’t recall what level of nagging or pleading persuaded my parents to buy me a guitar, but one day when I was about 14 we went to Thomsons Music Shop and came home with a vinyl case containing what was no more than a shaped plywood box with unforgiving metal wires stretched to the tuning heads from a metal brace at the bottom. I have no photos of it but found its cousin, described on the Guitar Noise website as ‘cheap as chips’.  That said, I was in love with it from the first moment, and it was my constant companion for four or five years.

A family friend taught me my first few chords, but his abilities went no further than thumb-strumming Michael Row The Boat Ashore, and I was quickly on the hunt for more demanding fare. I had bought a grey plastic plectrum and discovered that if I plucked or strummed down near the bridge, it had a harsher, more metallic sound and I could imagine it was an electric. (I was, I think, 14. Unbelievably I would be 21 before I first played an electric and 24 before I owned one.)

The scent of my guitar

This cheap guitar was truly a thing of wonder to me. I would gaze at it from all angles, in all lighting conditions. I would pose with it, of course. I would mime guitar solos I hadn’t a hope of even understanding. I even loved the aroma of wood and resin, eyes shut and nose pressed up against the strings by the sound hole. I’d tune and detune the strings, relishing the strange buzzes and moans they made. I’d rub glasses, cups and knives along the strings foreshadowing my later love of bottleneck (I’d no idea there was such a thing).

Hold Down a Chord

But two events powered my learning to actually play it. One was the John Pearse TV series of lessons Hold Down A Chord, which taught me fingerpicking and enabled me to approach Simon and Garfunkel songs like Kathy’s Song and April Come She Will. (Martin Carthy learned guitar from the same series.)

The other was when my three closest friends all acquired guitars and we set to learning together, in ferocious competition and loving co-operation, in a twelve-month burst that drove us from Michael Row The Boat to Fleetwood Mac’s Oh Well, Black Sabbath’s Paranoid, T. Rex’s Ride A White Swan and Cat Stevens’ Father and Son. We’d spent hours in one’s bedroom then the other’s, sharing chords, inversions, fingerpicking styles and songs. At the end of that year I could call myself a guitarist.

Soon I would attempt to be a singer, then a singer-songwriter.