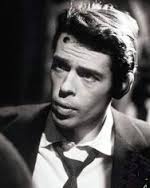 Ricky is a song I introduce at gigs as ‘a collaboration with two other writers, neither of whom know they’ve collaborated with me on it’.

The first was Jacques Brel (1929-1978 see Jacques Brel on Wikipedia). He called it Jacky (or Le Chanson de Jacky) and in it he imagines himself growing old as a crooning cabaret singer, singing for ‘authentic queers and phony virgins’, interested only in the greatest hits from his youth, when he was called Jacky.  In the second verse he becomes a drug dealer and in the third goes to heaven, where they still want to hear his hits.

In the 60s Mort Shuman wrote an English version, not a direct translation, which was adopted by Scott Walker, who was entranced by Brel at the time, finding a depth and daring to his writing that no English or American writer provided.

In 1986 Momus released a brilliant EP of Brel songs of which the title song Nicky was a re-imagining of Jacky. (Momus was the alias of Nick Currie.)

Suppose one day in Bromley, Kent
I live my nightmare and am sent
To sing for blonde suburban women
Before the wives of double-glazers
I’d be Julio Inglesias
Doing the greats in Argentinian

The EP also contained masterful rewrites of Voir Un Ami Pleurer and  Ne Me Quitte Pas, much closer to the dark desperation of the original than the well known Rod McKuen translation If You Go Away. It was my introduction to Momus.

I started singing Momus’s version of Nicky but it seemed to personal to him, and some of the lines I just couldn’t sing. For example, I loved the lines

But I couldn’t sing the preceding lines, as I didn’t think anyone in my audience would get the references quickly enough.

So I started making up some lines of my own

After a while it dawned on me that rather than looking forward to the end of my career as Brel had done, I was writing a wish-fulfilment song, so I named it Ricky, the rugged name I’d always wanted as a child, embarrassed by the name ‘Norman’.

It’s always been popular live, and it became a joke to rub in the wish-fulfilment bit by tagging bits of Kylie’s  I Should Be So Lucky and Bowie’s Ziggy Stardust to the end. This version was recorded by Gerry Callaghan at Edinburgh College.