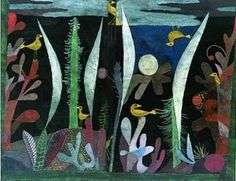 I updated the video in November 2017 to include lyrics.

Rounding off 2015 with a new song, very short and sweet.

Earlier in the year I had a daily practice of writing for 10 minutes each morning, just to accumulate ideas. Most of it was unusable, but this emerged one morning and when I reviewed the notebooks in October I liked it.

An artist friend told me that Paul Klee used to tell his drawing students just to ‘take a line for a walk’. That was the starting point, in fact the first thing I wrote was ‘Take a line for a walk, see where it leads you’. The rest was written spontaneously and is exactly as I wrote it. One thing that helped in writing it was deciding not to worry about rhyme. That really liberates. Later that year, I was walking into Queensferry one day and realised my mind was empty but for a song from the ‘inner jukebox’ – what I was doing was taking a song for a walk. Which gave me the only revision I wanted to make to the lyric.

The chord sequence again was spontaneous and pretty much first time. I recorded the picking and other guitar tracks in October but wasn’t happy with any of the solos, and shelved it. Last week I decided to revisit it. I deleted most of the solo attempts and chopped a couple of bits into the solo you hear. I added the percussion loops and voices. The result somehow feels to me like a quintessential Norman song, or at least the kind of thing I like to create, an echoey soundscape with a sense of mystery.