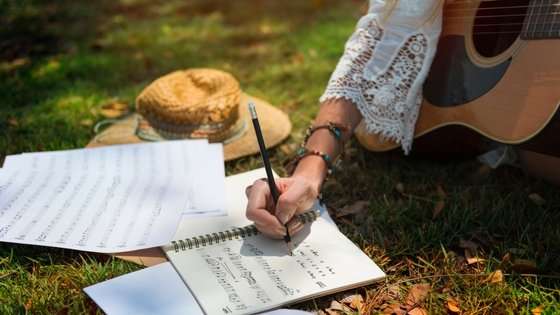 Some thoughts on songwriting, from the first blog I kept, written in 1997, but I’m still behind most of this.

It’s just magic! It feels that way anyway. Writers may disagree about the proportions of inspiration and perspiration that go into making a song, but everyone recognises that leap of the heart when you think ‘Hey, this is actually something good!’. For many of us, this is immediately followed by the cold sweat of ‘Is it someone else’s song?’ It would be so reassuring if we could just say ‘Computer – is there already a song that goes hmmm hmmmm da da da da?’.

(Remember I wrote the first draft of this in 1997 – there probably is now!)

I remember having a nagging doubt that one of my songs was borrowed from an Ultravox hit of years ago. I had to dash off to the local audio library and scrabble for an Ultravox Greatest Hits collection. (This was before Spotify or even the Napster revolution!) The librarian had probably never seen anyone require an Ultravox album with such urgency! I rammed it into my walkman and leaned back on the outside wall to learn my fate. Yes, the song I thought it was did exist, but it was different enough to let me admit this proto-song that was tapping at my window.

Some writer (Donovan I think) said words to the effect that you don’t create a song
– songs are all around in the air, and you just reach out and catch
one. While it may not be good metaphysics, his statement does reflect
the constantly surprising feeling of the completeness of a newly-conceived
song, for me anyway. I seem to hear the entire song, voices and instruments,
in a way that is much closer to remembering a previously heard song
than it is to deliberately starting with a few elements and considering
consciously what you’re going to do with them. Hence, I suppose, my
anxiety about the possibility that I am simply remembering a song
I’ve heard years ago.

The circumstances may give rise to different feelings about the conception
of a song. The vast majority of my songs, and probably my best ones,
first pop into my head out of doors, usually walking in the street.
When I do sit down with a guitar to write, it is more deliberate,
more conscious, less immediate. One reason for my songs being catchy
and easily remembered is that if I think of them in the city street,
they have to have a damn good hook for me to retain them till I get
home and work out the chords. I can’t write music and found singing
furtively into a microcassette too embarrassing to adopt as a standard
practice.

The kind of new song that astonishes and delights me most is when I
just open my mouth and start singing, not knowing what I’m going to sing,
and the song is suddenly ‘there’. Like most writers, I find a few good
lines are ‘given’ and the rest I have to craft. The sense of completeness
I mentioned earlier doesn’t mean I immediately know every word of every
verse, but only the sensation that somewhere the other verses do exist
– like the sculptor who looks at a block of stone and takes his task to
be that of removing all the bits that aren’t the figure. I ‘heard’ the
third verse of The Desert Was Better as
I walked from work to Haymarket station, and scribbled down a fair amount
of the final lyric in the station waiting room; the rest took weeks to
hammer into shape.

Bob Dylan’s cryptic advice for songwriters – ‘Just take a song you like
and change the words then change the music’ – rings true for me. Some of my songs
started out as attempts to write in the vein of another song, or even
just to play it! Fortunately, the new songs seem to settle down and make
their homes acceptably far away from their original inspiration. The song
The Ballad of Bob Dylan poured out of me the evening
I bought the Traveling Wilburys first album and picked up my guitar to
try to play Tweeter and the Monkey Man. Likewise New
Eyes moved a long way from its initial inspiration: ‘Trains and Boats
and Planes’ which I was humming as I walked along Lothian Road to the bus stop.

These examples are the most exciting but not the most typical. Often the ‘seed’ of the song is tantalisingly brief, and it can be a struggle to bring it to completion. The basic idea for Still, A Hungry Ghosts song, possessed me while changing trains in, I think, York, but it was a struggle of weeks and months to find a context of words and music with which to surround the very sparse but appealing chorus. In the end it was my impatience to hear it sung by Tricia Thom, the singer I was working with at the time,
that forced me to write a couple of verses, which I then tinkered with but didn’t replace over the following weeks.

Having a fulltime (non-musical) job and a family, my opportunities
to write on an instrument are few and far between. When I do write on
guitar I write a different kind of song, usually one suggested by the atmosphere evoked by a chord sequence (Hungry Ghosts.)
This is much more a crafting experience than one of inspiration. In other
words, I have to spend more time consciously experimenting before the
‘Hey this is actually good’ moment, which is not any less narcotic
for all that!

So what tips would I give for someone writing songs. I’m hardly a role-model (whoever heard of a songwriter afraid to sing in his own house?) but came up with the following in a discussion on a message board: