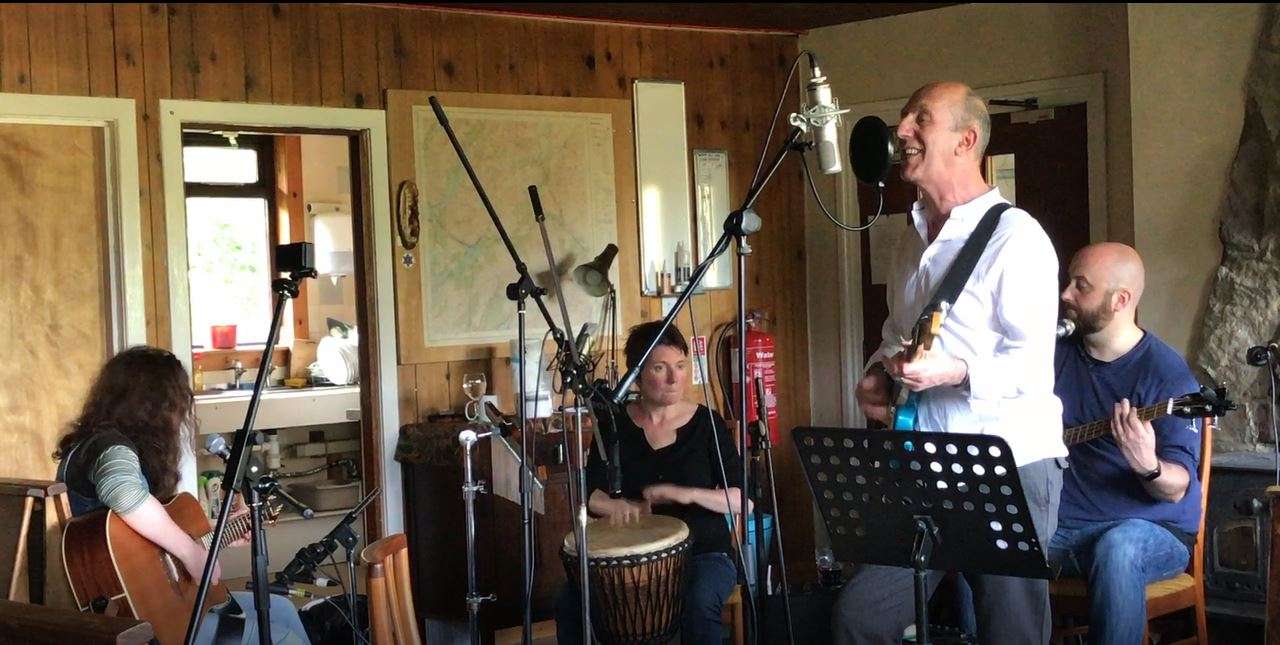 The last few posts I’ve been reminiscing over decades. Today I’ll talk about something I expect to be reminiscing about for decades!

On the May bank holiday weekend I was part of a group of songwriters and musos who took over the Bridge of Orchy Ski Lodge for a recording weekend.  There were two bands – my Heaven Sent and Edinburgh Americana band The Heartbreak Diet, each doing a set. We were joined by solo performers Gerry Callaghan, Liz Jones and Ross Arthur and a jazz duet of guitarist Ged Brockie and singer Ronnie Ireland. Finally there were solo sets by Fiona Thom, James Whyte, Suzy Cargill and me. Ronnie, a skilled artist, sketched the performers and the environment, while Ged’s son Euan and Liz’s wife Lou took photos. Euan filmed the performances and interviewed some of us.

The weekend was the brainchild of Gerry Callaghan, one of several notions he had to bring together performers he’d recorded or worked with at The Listening Room. The idea was to have an intimate performance – sitting in a room with friends – recorded with top quality equipment and post-production. Gerry and Ross, a studio engineer, spent Friday setting up the equipment as the early arrivals basked in the sun outside. Eventually the combination of midges outdoors and pizza indoors brought us inside to enjoy the first two sets by Ross Arthur and Heartbreak Diet. It took a lot of work to set up all the mics for the Heartbreak Diet, especially as the band swap instruments and lead vocals for different songs.

Saturday saw sets by Liz Jones with Suzy on percussion and Lou on bass, Ronnie Ireland, Ged and Gerry. Simpler to record than the band! Ged, a professional player and composer, gave us a short workshop on chord construction and composition. Some of our party fled to the nearby hotel to watch the Scottish Cup Final.  Suzy oversaw the making of two huge pots of chilli.

Sunday had more solo sets, from me, Fiona Thom and James Whyte, followed by a band set by the Heaven Sent.  By 10 the planned sessions were all completed and we relaxed into some jams, but not before we quickly arranged and recorded a new version of Ross’s single Amethyst. Gerry and Liz did some luxurious versions of JJ Cale and Van Morrison songs. Eventually James, Gerry and I closed proceedings at 3 o’clock on Monday morning.

It was a memorable weekend – the sun, some new friendships, hearing new songs and playing in new lineups.  We were all brimming with gratitude to Gerry and Ross for making it happen.  The videos and photos will appear over the next few weeks at http://orchysessions.com

The Heaven Sent album is in the final stage of mixing – Gerry and I are having a last tweak tomorrow, then it’ll go off to a top mastering studio.

I’ve been thinking a lot about the cover art. I’ve always done my own cover art, sometimes using artwork provided by others (like Andy McFarlane for Roadblock).  This time I thought I’d find someone new to collaborate with. I started by commissioning a few design ideas from designers on Fiverr.com. From that I got three designs, which were interesting, but they weren’t quite there.  I have some new photos of me, plus a good ‘vintage’ photo which I like.  But I’m resistant to fronting a band album with a picture of me on my own. I’m now going to work with Liz Jones, who is a graphic designer as well as songwriter and cafe manager, on some new ideas. We may end up using me, we may not.

I’ve used photos from my session at the Captain’s Bar with Philippe Monthoux on the homepage and Facebook. Here’s another.

Does anyone love the CD booklet these days?

With Wolf, and with Roadblock, I wanted them to be pleasing visual objects as well as music, and designed full multi-page lyric booklets to go on with them. I don’t see many people doing that nowadays, and the message seems to be that most people will listen on streaming services or download it. Only a small minority will want a CD and those who do will probably only open it once to digitise it!  So a big booklet production is a waste of effort.

Is that right?  If you have an opinion on this please email me on biz@normanlamont.com!
(And before you suggest it, I can’t afford to make a vinyl album and don’t think I’d sell more than a handful if I did.)

1 thought on “A weekend to remember – the Orchy sessions”