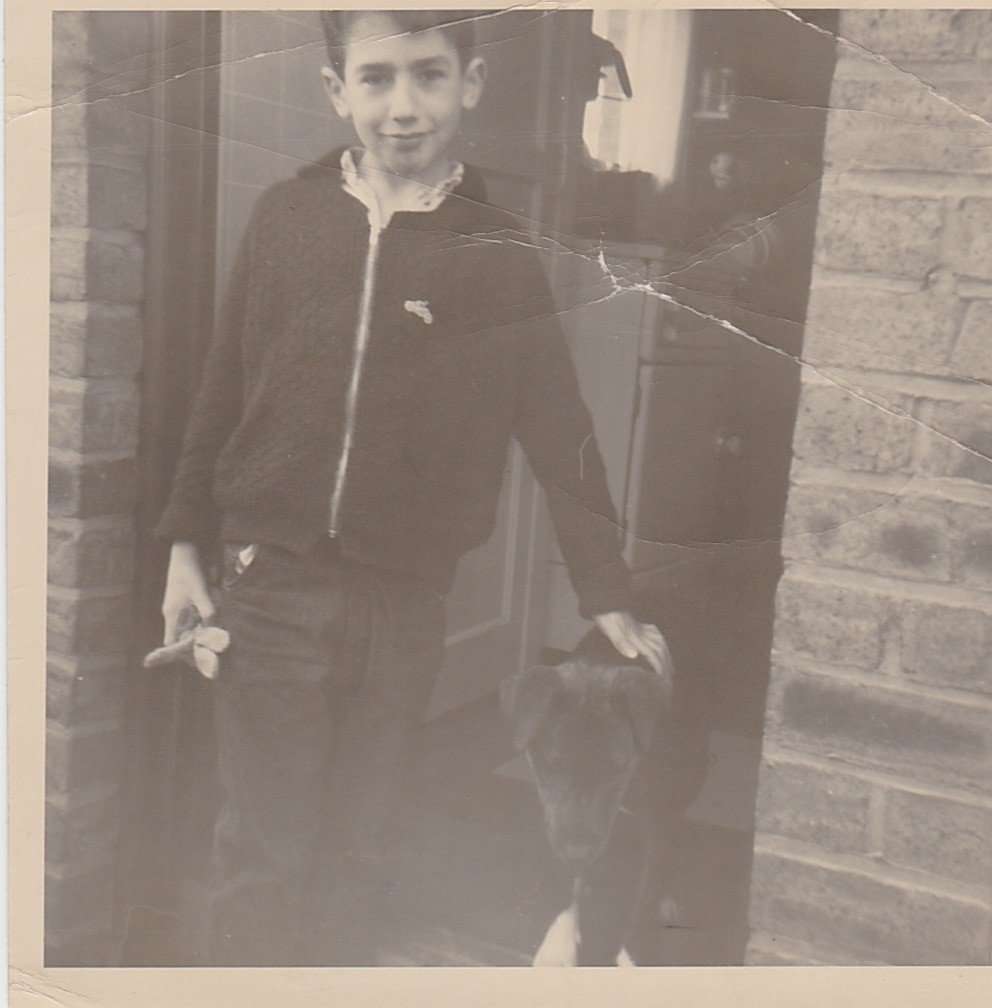 One of the things about making a lockdown project of clearing and cataloguing a lifetime of photos – four lifetimes if you count my wife and our children – is that memories get triggered. Daily. Nightly even, when you’re trying to sleep.

One thing that’s come to mind recently is the fascination with death that enveloped me as an under-five. I’ve been speculating that the reason I was first drawn to Leonard Cohen, Nick Cave, Richard Thompson and the rest of that melancholy crew as a young (and old) man is the formative influence of a few songs that were regular parts of my early childhood. I’m going to explore that today, and perhaps you’ll deign to be my ever-patient therapist.

There are four songs that I remember forming my childhood picture of life as it is lived – birth, growing up, something called ‘work’, old age and death.

I was born in 1954. We didn’t have a TV until 1959 so much of the firing of my imagination was done by radio, in particular Children’s Favourites on a Saturday morning and Two Way Family Favourites on Sunday afternoon. Somewhere between The Laughing Policeman, The Ugly Duckling and Rawhide came three of the songs I’m going to talk about were regulars on the radio; the fourth was a regular at church.

This condensed melancholy biography of Jimmy Brown was sung by the Browns, a country trio (no relation to Jimmy, I assume). It tells the story of a little village where the church bells announce the birth (verse 1), the marriage (verse 2) and the death (verse 3) of Jimmy Brown. Perhaps this was where I learned about life. I didn’t know anyone who actually died during those childhood years. I knew my two grandmothers were something called ‘old’ and I didn’t have any grandfathers for reasons I didn’t quite understand. I did understand about birth, which I’ll come to later. This song was my education, but it was a hard education – you were born, you got married and you died and that was a sad thing. ‘Just a lonely bell was ringing.’ I was an only child. I understood ‘lonely’. I identified completely with little Jimmy Brown and – I knew nothing of marriage after all – was troubled by his sad demise.

All the chapel bells were ringing
In the little valley town
And the songs that they were singing
Were for baby Jimmy Brown
Then the little congregation
Prayed for guidance from above
Lead us not into temptation,
Bless this hour of meditation
Guide him with eternal love

There’s a village hidden deep in the valley
Beneath the mountains high above
And there, twenty years thereafter
Jimmy was to meet his love

All the chapel bells were ringing,
Was a great day in his life
Cause the songs that they were singing
Were for Jimmy and his wife
Then the little congregation
Prayed for guidance from above
Lead us not into temptation,
Bless oh Lord this celebration
May their lives be filled with love

Just a lonely bell was ringing
In the little valley town
Twas farewell that it was singing
To our good old Jimmy Brown
And the little congregation
Prayed for guidance from above
Lead us not into temptation,
May his soul find the salvation
Of thy great eternal love

I had no grandfathers, but I understood the concept of course. And this was another of those birth-life-death songs. According to Wikipedia it was written in 1876 by Henry Clay Work, who also wrote Marching Through Georgia. The article also claims the term ‘grandfather clock’ originated from this song.

The clock is bought to celebrate the man’s birth, tolls to mark the events of his life, but stops suddenly on his death ‘never to go again’.The version I heard would have been by the Radio Revellers. It’s typical that I could remember only the chorus:

We had a carriage clock on the sideboard that ticked. I started listening intently to it as it ticked off the seconds of my four-year-old life. I imagined it stopping and the ensuing, terrifying silence that would ring thereafter. Where would I be then?

My grandfather’s clock was too large for the shelf,
So it stood ninety years on the floor;
It was taller by half than the old man himself,
Though it weighed not a pennyweight more.
It was bought on the morn of the day that he was born,
And was always his treasure and pride;
But it stopp’d short — never to go again —
When the old man died.

In watching its pendulum swing to and fro,
Many hours had he spent while a boy.
And in childhood and manhood the clock seemed to know
And to share both his grief and his joy.
For it struck twenty-four when he entered at the door,
With a blooming and beautiful bride;
But it stopp’d short — never to go again —
When the old man died.

My grandfather said that of those he could hire,
Not a servant so faithful he found;
For it wasted no time, and had but one desire —
At the close of each week to be wound.
And it kept in its place — not a frown upon its face,
And its hands never hung by its side.
But it stopp’d short — never to go again —
When the old man died.

It rang an alarm in the dead of the night —
An alarm that for years had been dumb;
And we knew that his spirit was pluming for flight —
That his hour of departure had come.
Still the clock kept the time, with a soft and muffled chime,
As we silently stood by his side;
But it stopp’d short — never to go again —
When the old man died.

My parents were regular churchgoers and I went, fairly enthusiastically, until I was about 13. Almost every week there was a baptism. One of the favourite hymns was this one. When I say ‘favourite’ I’m not just talking about the congregation but it was my favourite then and probably still is. If I was ever to choose a Church of Scotland hymn for any purpose it would be this one, also known by its melody as ‘Belmont’. But look at the lyrics:

By cool Siloam’s shady rill
How fair the lily grows!
How sweet the breath, beneath the hill,
Of Sharon’s dewy rose!
Lo! such the child whose early feet
The paths of peace have trod,
Whose secret heart, with influence sweet,
Is upward drawn to God.

By cool Siloam’s shady rill
The lily must decay;
The rose that blooms beneath the hill
Must shortly fade away.

And soon, too soon, the wintry hour
Of man’s maturer age
Will shake the soul with sorrow’s power
And stormy passion’s rage.

O Thou Whose infant feet were found
Within Thy Father’s shrine,
Whose years with changeless virtue crowned,
Were all alike divine.

Dependent on Thy bounteous breath,
We seek Thy grace alone,
In childhood, manhood, age, and death
To keep us still Thine own.

I didn’t really understand the stuff about shaking the soul with sorry’s power, but ‘the lily must decay’ ‘the rose must fade away’ were things I saw all the time, my mother and gran both being keen buyers of flowers. The line that really got to me, however was ‘childhood, manhood, age, and death’. Once again I was being told what was in store for me. I would wake in the night for years worried about the ‘manhood’ bit. My dad worked as a linesman (Ayrshire, not Wichita), and I worried that one day I would be plucked away from home and sent to ‘work’, expected to be able to do everything he could do and knowing I’d fail.

The last of my songs, probably the best-known, and one that was quite devastating. Although the other songs disturbed and frightened me, this was the only one that had my crying so much I couldn’t bear to listen to it again.

At that age I had a dog – but for such a short time I can’t even remember his name. It must have been only a week or so, then I was told he had ‘gone to a farm where he would be happy running around, not being cooped up in a little house.’

And on the radio: Old Shep. Sometimes I dared to wonder if my dad had taken his gun (I assumed he had one) to that short-lived friend. Even at that age, the line ‘just a boy and his dog’ was so evocative to me. Running over hills and valleys, through woods and along riverbanks. Very different from the two-room house with an outside toilet in the middle of the town.

Only a few years later, however, we had moved to a new house on the edge of the town, backing onto everything I’d dreamed of from that line – riverbank, forest, hills, valleys. And shortly after moving we got a dog, Terry, who was my brother and best friend rolled into one. After we got Terry, I refused to listen to Old Shep, running from the room if it ever came on. It’s a good job I never learned (until today) that the childhood dog about whom Red Foley wrote the lyric was actually poisoned by a neighbour!

When I was a lad and old Shep was a pup
Over hills and meadows we’d stray
Just a boy and his dog, we were both full of fun
We grew up together that way

I remember the time at the old swimmin’ hold
When I would have drowned beyond doubt
But old Shep was right there, to the rescue he came
He jumped in and helped, pulled me out

As the years fast did roll, old Shep, he grew old
His eyes were fast growing dim
And one day the doctor looked at me and said
“I can do no more for him, Jim”

With hands that were trembling, I picked up my gun
And aimed it at Shep’s faithful head
I just couldn’t do it, I wanted to run
I wish they would shoot me instead

Old Shep, he has gone where the good doggies go
And no more with old Shep, will I roam
But if dogs have a Heaven, there’s one thing I know
Old Shep has a wonderful home

That explains a lot …

It’s interesting to delve into that little boy’s mind from the point of view of, I guess, old age. I’m the age my grandmothers probably were when I was young. I’ve always been drawn to melancholy music.

If there had been goths when I was young I’d almost certainly have been one. So next time someone says ‘Gonna play something more upbeat?’ I’ll fix them with my Ancient Mariner stare and tell them ‘There were four songs …’

2 thoughts on “Death Songs of a Four Year Old”