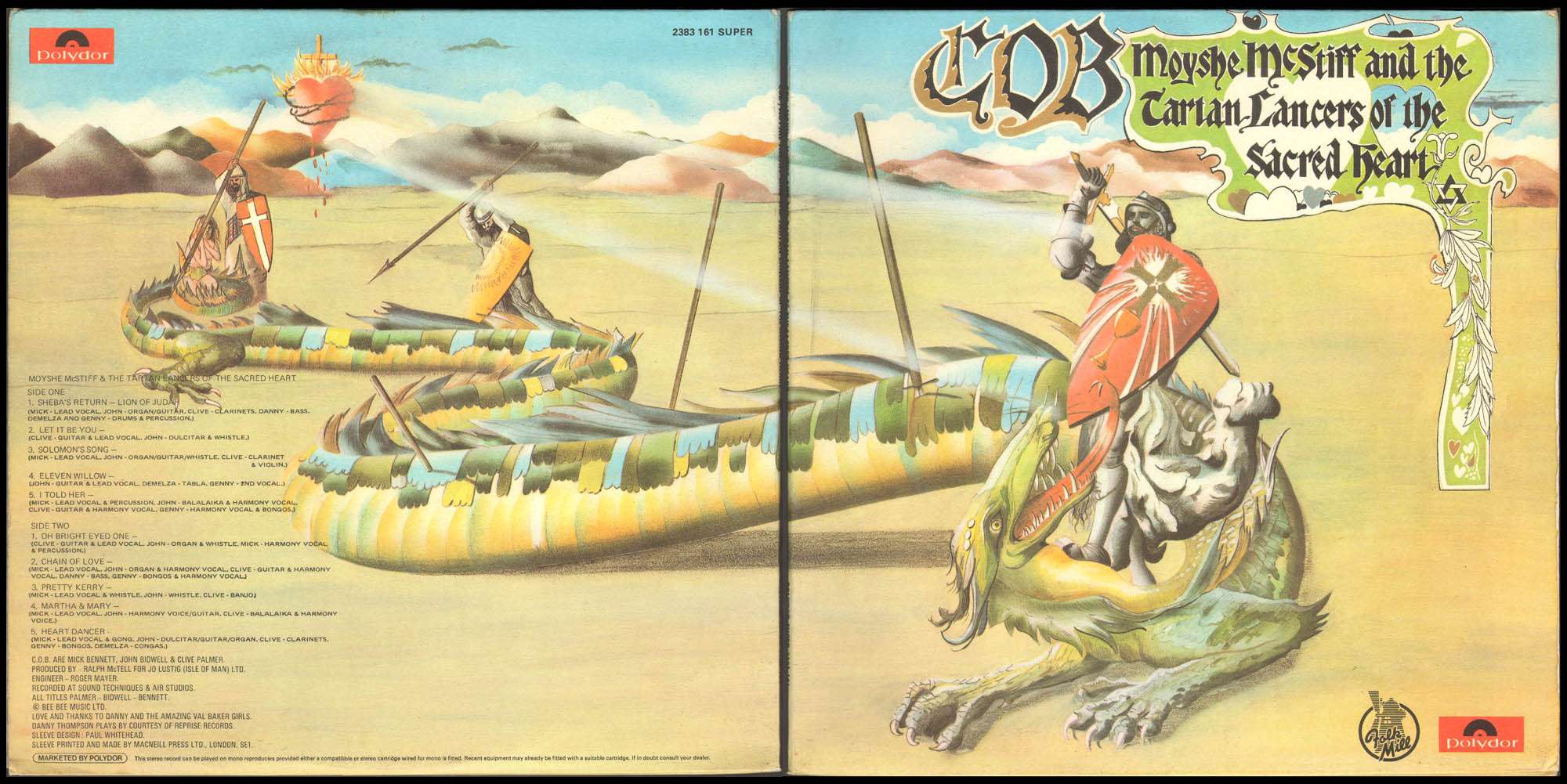 Moyshe is a small but fascinating episode in the Clive Palmer story – a pattern of starting bands, getting a little success and walking away. He’s most famous for co-founding the Incredible String Band with Robin Williamson, at Clive’s Incredible Folk Club in Sauchiehall Street, Glasgow.

An aficionado of ragtime and early 20th century music-hall, Clive never really seemed to belong to any era, whether it was the beatniks or the hippies. Even in 1966, living in a tent pegged down in an Edinburgh flat, he seemed old, or maybe ageless. In the space of 1966-67 he’d recorded the first Incredible String Band album (on which he hardly played at all), left them, travelled through Iran, Afghanistan, Pakistan and India, returned home, spent time in Barlinnie Prison on remand for possession, and declined to join his former bandmates in their rise to psychedelic fame.

After working with Hamish Imlach and Wizz Jones, his next recording band, in 1968 was the Famous Jug Band (no name-relation to the Incredible String Band, of course!) – then moved to Cornwall where there was a thriving folk scene.

The term comes from the 1910s and 1920s in the southern states of the USA where bands would play home-made instruments. By buzzing his lips into a glass or earthenware jug, one player in each band would fulfil the function of the bassist, providing rhythm and a bassline, copying the tuba’s role in the brass bands of the day. This rough, egalitarian approach to music found its way through the blues into skiffle in the 1950s and from there into rock’n’roll.

Typically for Clive, the Famous Jug Band didn’t restrict themselves to jug band music. Their most celebrated song, A Leaf Must Fall, is a beautiful folk ballad covered by many singers (including me on All The Time In Heaven).

Using up band names like Rizla papers, Clive performed in many lineups -Stockroom Five, Temple Creatures (named after cult prostitutes in the ancient Middle East) and finally, on returning to London, Clive’s Original Band, or COB, with Mick Bennett and John Bidwell.

In 1971 CBS had become interested in what looked like an up-and-coming new genre, progressive folk. They invited some of their more successful artists to produce an album for another artist. Ralph McTell, then a leading light in the folk/acoustic world, was a friend of Clive’s from the Cornwall music scene, and produced the first album by COB, Spirit of Love.

Clive wasn’t that keen on the name, which was suggested by manager Jo Lustig to somehow echo Clive’s history with the more famous Incredible String Band, according to Grahame Hood:

Typically for Clive, Spirit of Love sounds like it was dredged up from some misty historical world that you can’t quite place. It’s not fey, English garden stuff; the voices are weary and travel-worn and several of the songs are based on chants that sound like they could continue forever. Spirit of Love didn’t sell particularly well but was acclaimed by folk and even rock critics, and led to a healthy gigging schedule and gave them the scope to spend more time planning and recording a followup. They added a percussionist, Genevieve Val Baker, who brought her sister Demelza, also a percussionist, and recruited Danny Thompson, double-bassist to the stars, for the recording sessions.

The result was the extraordinary Moyshe McStiff And The Tartan Lancers of the Sacred Heart. The title, the cover art, and the song lyrics all allude to the same three themes: Jewish history and symbolism (Mick and Clive), Catholicism (John Bidwell) and Celtic myth and culture (Clive). The songs originated from one or other of the three singers, but were shaped by them all and credited to them all.

After 1m 20 of musical scene-setting, The Lion Of Judah opens the album with rock song chords and casbah instrumentation.

I am comely because I am black
As the tents of Kedar, as Solomon’s veil

I am the rose of Sharon and the lily of the valley
As a rose among thorns, so is my beloved

In the 1980s I met John Bidwell in a folk club in Manchester and he said he’d try to remember a song from the album; he then produced a note-perfect version of his tricky 11/8 ballad Eleven Willows.

But among the welter of imagery and exotic textures there’s a gem of simplicity, Pretty Kerry, a sad tale of doomed love sung over a simple banjo arpeggio.


I found some irony in the fact that Clive Palmer never rejoined the Incredible String Band because he didn’t like the direction Robin and Mike were steering it in, towards ethnic instruments and world-music colours, yet in Moyshe McStiff he and his band produced what I think is a masterpiece of the genre, one I’ve often chosen to listen to over the Incredibles. The instrumentation is striking – harmonium, Danny Thompson’s powerful string bass, balalaika, hand drums and the dulcitar – a dulcimer quickly hand-made from sheets of pine wood by Clive and John. They used a sitar-style bridge where the strings pass over a flat piece of bone, gradually deepening the holes in the bridge until they got the sitar buzz they were looking for. It’s used to beautiful effect on Let It Be You.

Sadly Moyshe was never that well received in the all-powerful music press. A tour supporting Pentangle was a lucrative but difficult experience as the members of Pentangle were at each other’s throats, splitting at the end of the tour. Radio having lost interest in COB, they persevered for a while with a well-attended residency in a Putney pub, but split in 1973. Clive Palmer gave up being a professional musician and having trained for a year in building instruments, moved back to his beloved Cornwall with his new wife. He continued to play in loosely formed local bands but his public profile was lower than low.

In the 1990s, the revival of interest in the Incredible String Band led by the fanzine Be Glad cast its glow over Clive, as it had over Dr Strangely Strange. Firstly Robin Williamson and Mike Heron shared a stage, then Robin and Clive undertook an album and tour together, then they shared a gig (but separate sets) with Mike, then finally in 2000 a short Incredible String Band tour, featuring Mike, Robin, Clive, Robin’s wife Bina and multi-instrumentalist Lawson Dando, was announced. This new version lasted a couple of years with sporadic gigs, until Robin and Bina pulled out in 2003. They added more musicians to compensate but whatever it was, it wasn’t the Incredible String Band and they called it a day in 2006. The reunion did boost interest in Clive’s work, from Elton John to Devendra Banhart, and enabled him to make more albums.

For this article I’ve drawn heavily on Grahame Hood’s Empty Pocket Blues, the lovingly researched and definitive work on Clive and the musical scenes he moved through. It’s a fascinating life story.  (Affiliate link)

In the late 80s I was looking to clear out some vinyl albums, and discovered that Moyshe was a rarity. I sold it to a collector for £80, about £150 in today’s money.  Do I regret it? A bit.


Anyone got news of Mick Bennett or John Bidwell?