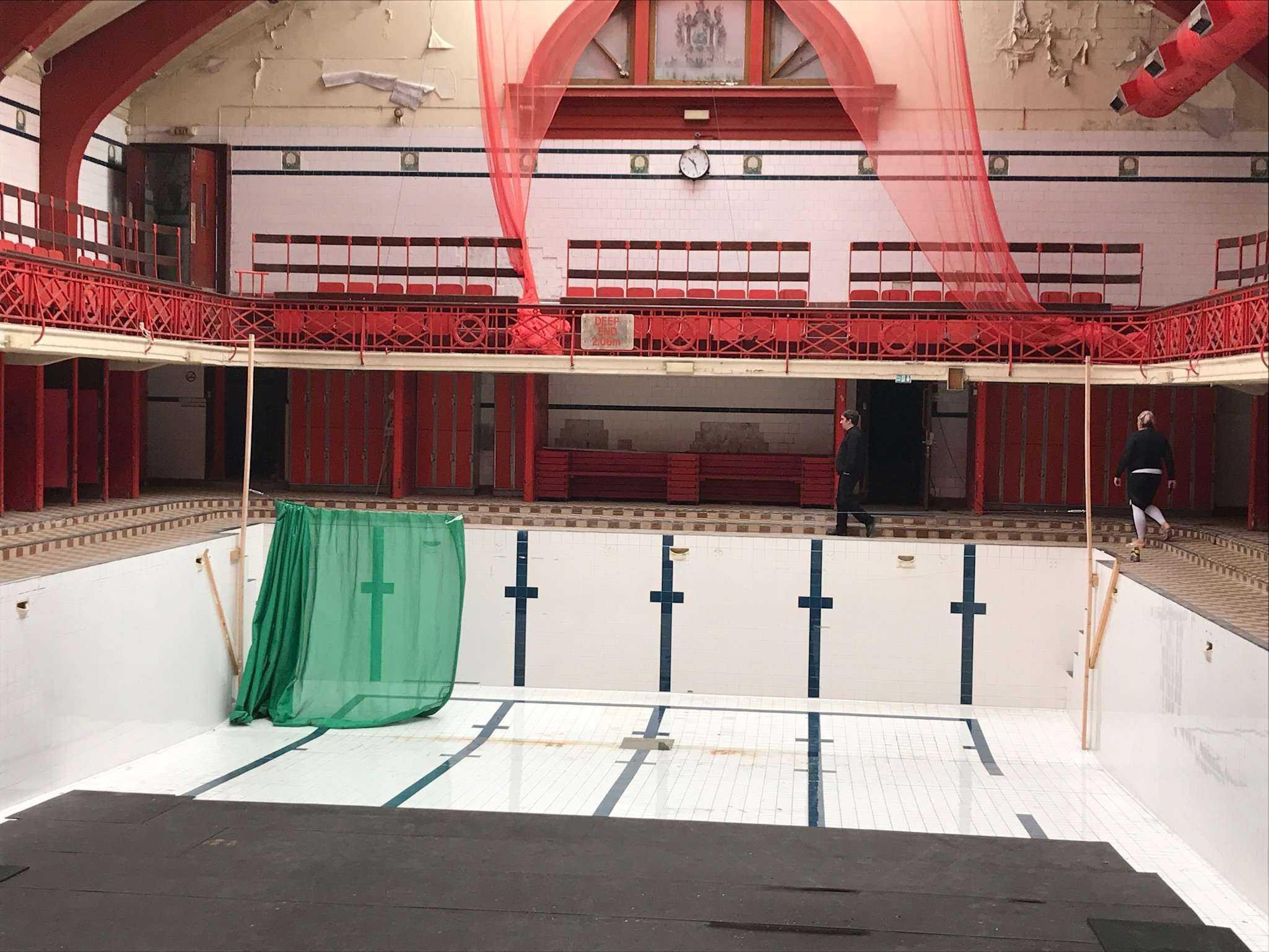 This past weekend I was at the Glasgow Songwriting Festival 2017. A weekend course rather than a festival. Here’s what happened and what I got from it. 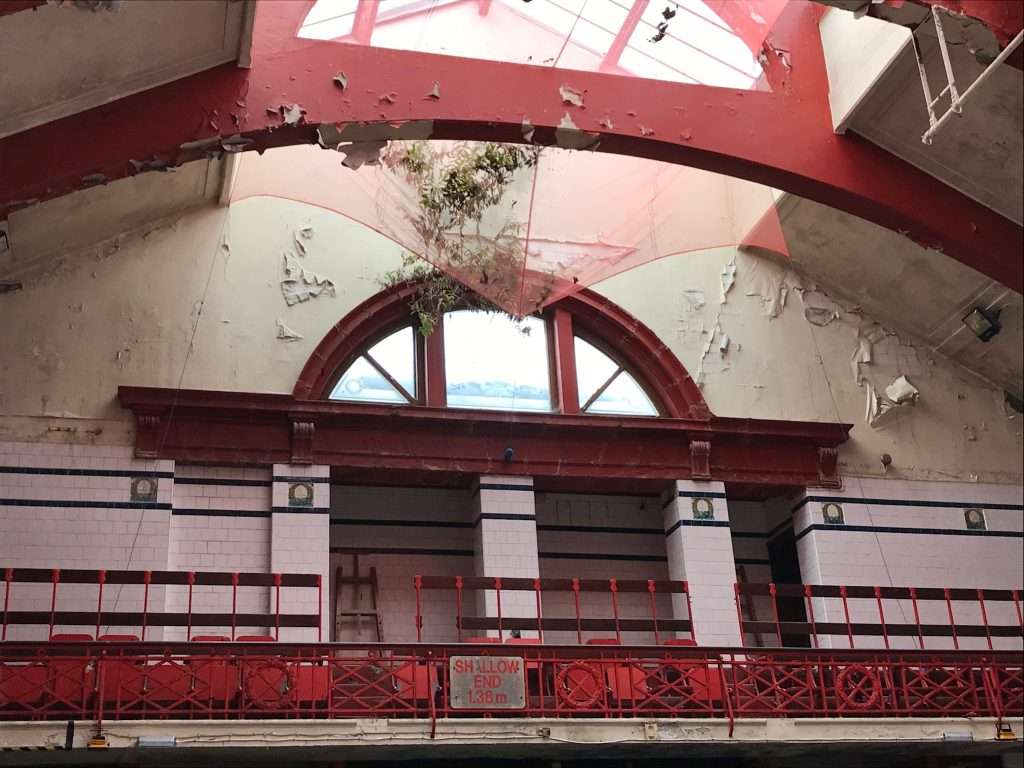 The course was held in one of strangest venues I’ve been in. A hundred-year-old building housing several swimming pools, rows of private bath cubicles and a theatre, it has been derelict for years since a community sit-in saved it from demolition in 2001. Protesters were evicted and the building was closed but it had been saved. Today a community trust is turning it into an arts and wellbeing venue, but with the aim of restoring it to full use as a swimming pool. Much of it is crumbling and derelict but has that Edwardian determination to combine functionality with beauty.

In a songwriting class with guitars you get together as a group but then need to go off and find a place to play your instrument in relative privacy. That was the adventure. We found ourselves in bath cubicles, changing cubicles, admin rooms, at the deep end of an empty pool and on the stage of an empty theatre space. And oh, the echo of the porcelain walls! This was so much better than an anonymous hotel with ‘breakout rooms’. The character of the building and its history placed us firmly in Glasgow with its tradition of social activism and optimism.

On Friday in a local music pub there was an opening concert that introduced us to the tutors:

Findlay Napier, the organiser of the weekend, sang warm-hearted story-songs of characters from Glasgow and elsewhere;

Emma Pollock, former singer of the Delgados, gave us more of an indie sound, with a shimmering semi-acoustic;

Jim Hunter gave us big-voiced country blues and impressed with his mastery of the dobro.

On Saturday morning we gathered at the baths, around 30 people I reckon. We had a wide spread of ages, probably averaging around 30-40, and numbers of men and women seemed about equal. Most came with guitars but some had keyboards, one had a harp and some no instrument. The best songs and part-songs I took part in over the weekend were with a superb singer from Aberdeen who needed a guitarist to find the chords to her words and melodies. 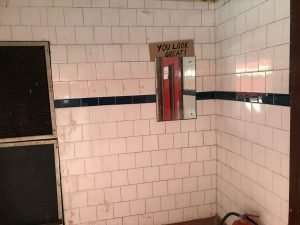 We stayed in the same group of eight for the the weekend, spending a half-day with each of the four tutors.

With Emma we dissected a Beatles song, exploring our emotional responses and the musical changes that triggered them. Emma’s focus was on chords, melody and musical movement but she also had us improvising – singing lines from randomly-selected books while another group member provided some chords on guitar. This was liberating – we became willing to ‘have a go’ and just throw it out there, which set the scene for the rest of the sessions.

We then went to Jim, who got us to write lots of titles, saying this was a well-known cure for writer’s block. We talked about our titles then had to go off to one of the the strange corners of Govanhill Baths and write at least part of the song that goes with that title. This was my first ‘high’ of the weekend, where I managed to write the lyrics to a complete song – nothing profound, just a fun self-deprecating country song – in about five minutes flat, which gave me the time to work with singer Christian on two songs of hers, one of which was a real beauty.

On Saturday night most of the group met with the tutors in a local bowling club (a sedate Glasgow bowling green, not a bowling alley) for a singaround that went on till one in the morning. Covers, new songs, old songs, it gave us a chance to hear the singers from the other groups. Again I was amazed not only at the quality but the range of styles. The highlight for me was playing Jim’s dobro.

There seemed to be no hangovers on Sunday morning as we went into Karine’s session. This took place actually in the empty pool, and she had us walking round in pairs capturing our childhood memories of swimming pools. Her focus was on lyrics and the power of restriction. We discussed some haiku that Karine had brought and had the task of writing some with the strictest rules governing number of syllables, avoiding adjectives and including scene-setting and an emotional turn. 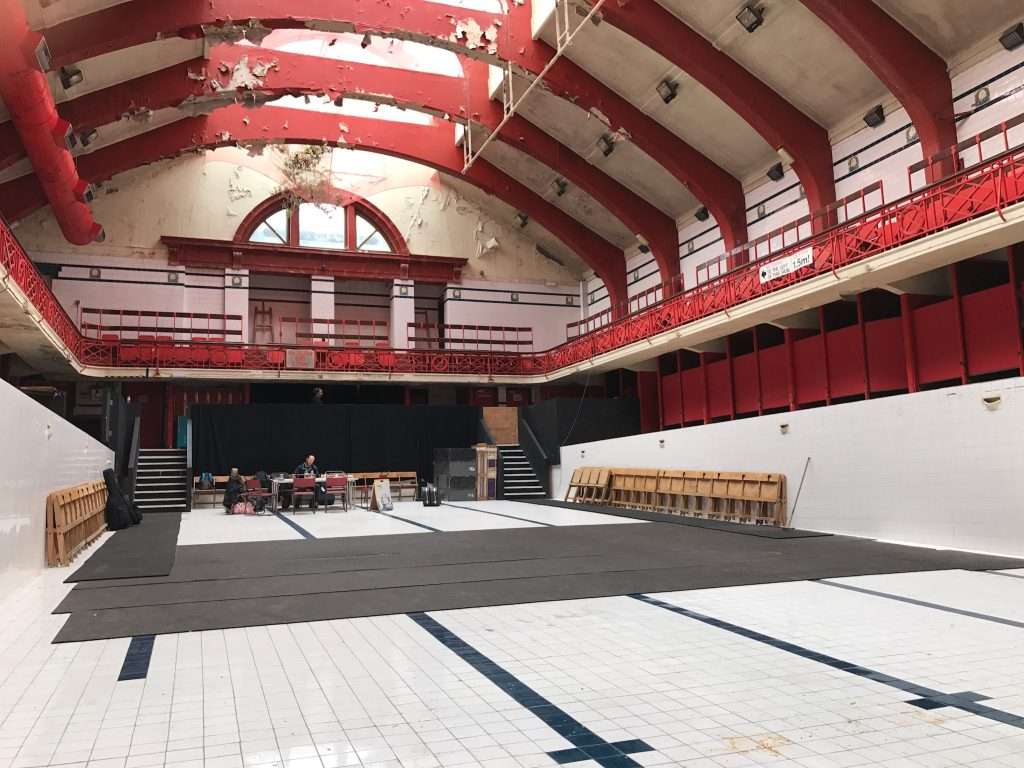 When I had walked the pool, my teammate Emma and I found both of our memories of swimming pools were fearful experiences, she because of pressure from her mother, me because I was the only one of my friends who couldn’t swim. These fears found their way into my haiku:

Head breaks the surface
I dived, I did it right!
Mum wasn’t looking

Karine then gave us an equally strict set of musical instructions and got us to create the beginning of song from the raw material of the haiku and the pool memories.

In our afternoon session with Findlay we brought together the themes of working within restrictions and working from titles, and added the pressure of time – ‘speed writing’, three short collaborative sessions with a different partner each time. Christian and I came up with our third co-write of the weekend on the subject of ice cream.

Why did I do it and what did I get from it?

I felt I’d got stuck over the years in the thought that every song was a big deal. At most it ‘should’ be some sort of profound statement or at least it should be something that would become an audience favourite when I played it live. That’s a lot of expectation to put on a fragile and tentative process. That’s how I’ve got into the incredible development cycles of some of my songs which have taken up to, sometimes over, twenty years to go from initial notes to solo versions to band versions or recordings.

Some of my friends would take part in online projects like writing a whole album during February and while I envied their ability I could never see myself doing that. Over recent years I’ve had the experience of writing a couple of songs quickly that seemed better than a lot of the ones I’d laboured over ( Makes Sense To Me and If I Could Be With You), so I’ve had a taste of the possibilities.

This weekend gave me much more confidence to just write for the sheer pleasure of it, without thinking of it as being carved on my tombstone, and also began to chip away at my inhibitions about co-writing. I came away exhilarated and energised. Big thanks to Findlay and his helpers for putting it together.  It was up there with the Orchy Sessions and Guitar Craft as one of the best musical times I’ve had – ever.

Other posts on songwriting