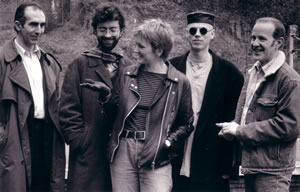 When I moved to Edinburgh in 1990 I discovered a lively music scene where the open-mic scenario was starting to take off. One prime mover was Peter Butterworth, who ran an excellent night at Youngs Hotel. This was where I started to build some semblance of an audience for my material, and also met some fine performers, notably Jim Malcolm, Woodstock Taylor and Anne-Marie Middleton. I met Woodstock at Celtic Connections, which was held in Bristo Square at the time, and provided rhythm guitar for her at quite a few gigs, including a major Queen’s Hall tribute to Woody Guthrie.

Try as I might, however, I could not find the right people for a band, and in 1991 – 2 withdrew from music, focusing instead on my family and a Buddhist group I had joined. One of the people I met there was the Artist Later To Be Known as the G. With the encouragement of some of my Buddhist friends, I returned to the stage at the end of 1993 at the Glasgow and Edinburgh Buddhist Centres with the G, Dave Watson, Stephen Malloch and Barney Milner on various instruments. This was the first lineup called Hungry Ghosts. I continued to use the name for various lineups including the G and violinist/sax player Suzanne Senior.

In 1994 I started going to the Edinburgh Songwriters Showcase and through a contact there met Tricia Thom, a singer looking for her first band. Stephen Malloch, a violinist who had played the Buddhist gigs with me, joined up, as did Dave Watson, although pressure of work forced him to drop out early on. Tricia’s excellent voice added a touch of soul to the songs I’d accumulated and we did many well-received gigs as a trio, becoming regulars at the Songwriters Showcase. 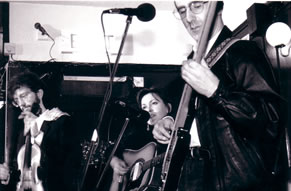 In 1996 we were joined by Tricia’s partner Sean Doyle on bass and had some more successful gigs including sessions for Radio Scotland in Glasgow. Tricia and Sean were both writing and their songs joined the Ghosts’ repetoire.

In 1997 the Ghosts’ most popular song Still (with which I secured a short-lived publishing deal) won a prize of a day’s studio time at the Edinburgh Festival.  We were joined by percussionist Dave Haswell and won a place in the heats of the List Battle of the Bands competition, with Polly Phillips joining on backing vocal.

Hungry Ghosts played the warmest set of the evening. Playing late-night mood music for the more reflective moments in life, they work through their gentle ballads with a soft, yet deft touch. Double female harmonies rise and fall while violin and an amazing array of percussion instruments add to the swell. (The List 18 Apr 1997)

The band seemed to be on the threshold of greater success, but the music Tricia and Sean were writing was outgrowing the limits of the Ghosts, and shortly afterwards they left to form the band Bespoke. Soon afterwards Stephen returned to his native Australia.

We have all remained good friends, and the Hungry Ghosts period is one of which I’m very fond. For many, their version of The Sea is the definitive one, although I don’t think it was ever really captured on tape. Recently I’ve been playing a little with Tricia and Sean, including a radically different version of the song Hungry Ghosts.

That ‘playing a little’ developed into years of weekly rehearsals for the band that started as Gravy Spiders and finally took to the stage for three gigs in 2009 and 2010 as Bespoke. Probably the highest ratio of rehearsals to gigs of any band ever.

It was always a rather fractious and difficult band, but musically rewarding, and I learned a lot about arrangements and rehearsals. Sadly various domestic situations spelt the end of Bespoke during 2011.