Towards the end of 2001 I entered a competition called Musician of the Year run by Allie Fox’s String Jam Club in Galashiels. To my surprise I found myself in the finals, and although I did not win, I received a substantial prize for best song (Ballad of Bob Dylan). The G and started talking to the girlfriend of one of the other finalists, who introduced us to her friend Alison Hennessy. I mentioned we were looking for a violinist to complete the lineup of a band, and discovered Alison played violin, had played in successful folk bands, and was interested. After a couple of exploratory sessions we were all enthused and played our first sets at the Full Moon Club and Out of the Bedroom, under the name of I Looked Up (taken from an Incredible String Band album). The incomprehension with which this name was greeted prompted us to change it to Norman Lamont and the Innocents, taken from the theme of the song Turn, ‘keep your innocence in mind’.

Alison, Norman and the G debut at the Full Moon Club 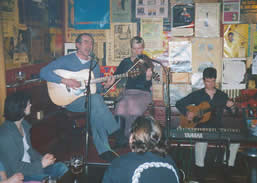 … and Out of the Bedroom

We played both these venues regularly but did not have much success in getting gigs in the wider world. We put a lot of time into rehearsal and recording, and the album versions of Call Back Fall Back and the Wolf started life then, featuring Alison and the G. Turn (which you can download on the songs page) was an out-take from these sessions, but more successful as recordings were the two traditional songs we recorded, both featuring Alison as lead singer. I count them as two of the very best bits of production and arrangement I’ve ever done, with great performances from both Alison and the G. (The Snow It Melts the Soonest is on the songs page).

Alison’s background was in folk and that was where her heart was. I could see the potential of introducing more traditional material into our repetoire – different audiences, less ego in the music, and not to do it seemed a waste of Alison’s considerable talent. I also enjoyed the songs. But I also felt a tension in that I wanted to get more of my songs heard and I was also drawn to more elecric rock and wanted to use a bassist.

After crowning our ‘semi-folk’ period by playing the Open Stage at Celtic Connections early in 2003, Alison decided to leave. We played our last set at Acoustica in, I think, February 2003 and on the same night I was introduced by Lynsey to violinist Mary Robbs. This seemed too good a chance to be true, as I’d contemplated giving up bands altogether! I’d got to know Lynsey at Out of the Bedroom, and had also been recording a rather off-kilter version of her Benjamin Denton Blues as a side project. It wasn’t long before Mary and Lynsey had joined the G and me as the second Innocents lineup.

This lineup was fairly stable through to 2006, recording the live album Living Water, with the G vacating the drum seat to Fritz van Helsing for some gigs and to Nelson Wright for others. We were also joined by Karen Austin of the Decibelles on backing vox. Mary and I were both in the original lineup of Lynsey’s band The Houdini Box.

The Innocents were voted Best Live Band in the Acoustic Edinburgh poll in spring of 2006, but by that time we were gigging less and all had new and exciting ‘side’ projects so I decided to announce the end of the band in September 2006.

Lynsey is now drumming for the Edinburgh Destroyers and doing occasional solo gigs. She’s focusing on her career as a graphic novel artist and writer.

Mary is back by my side in the Invisible Helpers, as well as several other bands.

Karen is building up a solo career as Indigo Rose and can be heard on the Out of the Bedroom compilation OOTB IV.

Nelson has moved to London; we had an enjoyable few years as acoustic duo The Wright Brothers.