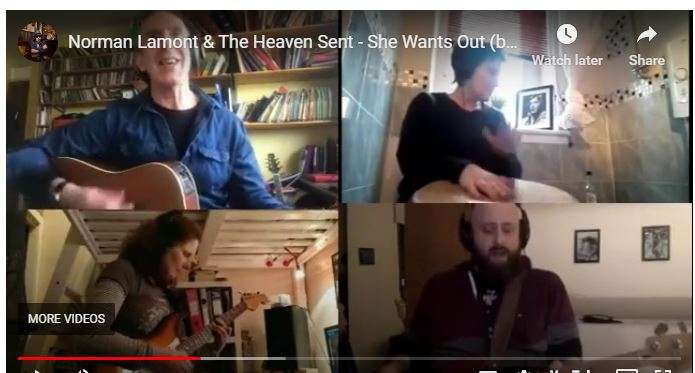 Here’s a new Heaven Sent video, produced from our various homes as we self-isolate.

I hope this provides a bit of cheer in these uncertain times.

As you probably know She Wants Out is our Beatles tribute, and takes place six weeks or months after She Loves You.

How it was done

At first I wanted to see if we could find a video platform where we could play together in sync, but that doesn’t seem to be possible.

So I made a video of myself playing the song and sent it to the band, inviting them to play it on one device and video themselves on another. Fortunately they each had two devices to make it possible.

My first mistake was to record my voice and guitar as just one track. My second was not to include a clapperboard sound or even a 1, 2, 3, 4 that I could use to line up the various returning videos. My second was not recording to a click track, which would have made the sync easier. But you live and learn.

After a couple of days I got videos back from the band. I stitched them together, first making the ‘composite’ four shots that appears from time to time. I rendered that to a new video and imported it into my main video as a track I could pull in when I wanted it.

Lining up the videos was hard work, shifting them tiny amounts to the left and right so that they all fitted. It took a few hours and left me with a sore neck.

I shared it with the band, but they were unhappy with the sound of their instruments and it turned out I’d missed some files they sent me. Listening to the track with my wife, it sounded really muddy and my voice, since I was unable to separate it from my guitar, was lost in the mix. Reluctantly I accepted that remedial work was necessary before I could release it.

Firstly I recorded another vocal track, trying to double my original vocal. Most of the time I managed it. You might noticed a couple of words here and there where I drop the doubled voice and it sounds quieter.

Then I extracted the audio from each of the band’s tracks and made a full stereo mix of just the audio, with some compression, reverb and, most important, editing out some bits. The resultant track was a lot clearer. I imported that into my video editor and got rid of the audio from each player. I just had to sync this track to the video tracks which I’d already chopped up.

And that’s how we got to where we are. If I do it again I’ll make it easier for myself, but now that the final version is done and still looks funny, I’ve forgotten the agony!

2 thoughts on “She Wants Out (quarantine version)”