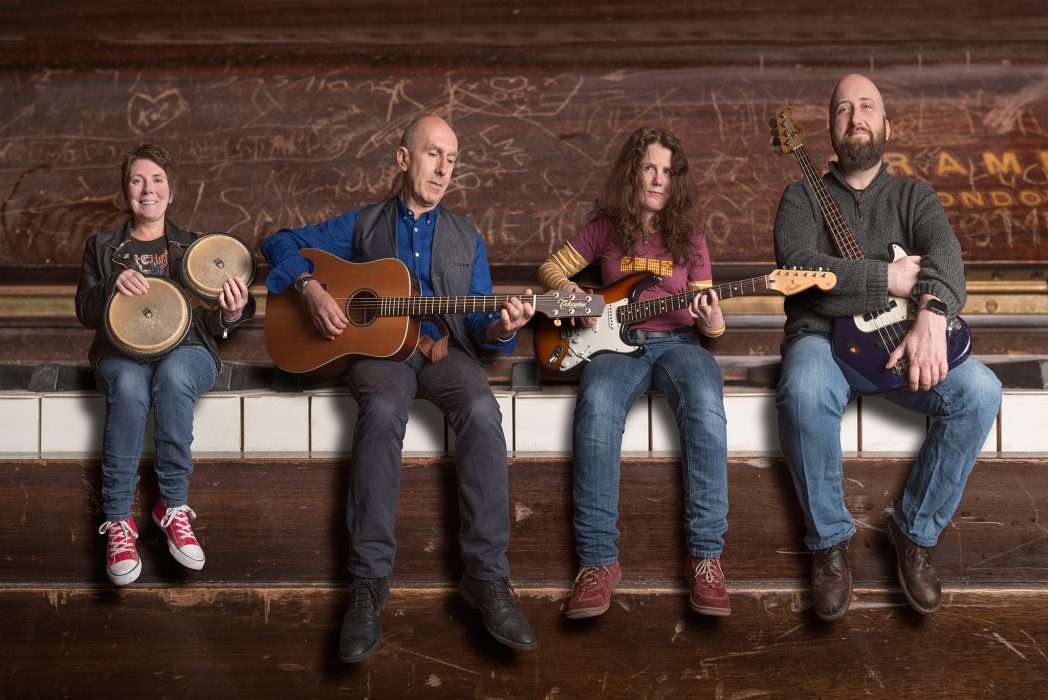 The band’s album In Another Life is out today.  You can buy it on Bandcamp here.  Please share with anyone you think deserves it because they’ve been such good humans.

Some days over the last two years I’ve wondered if we’d ever get to this day! Here’s the story …

It started at the end of 2015. The Heaven Sent had been together for  years and I wanted to capture the new songs we’d arranged, plus some others that I wanted the band to play. Unlike everything I’ve done before this would be a band album with minimum overdubbing from me. I bought a small multi-track recorder with the thought that we’d sit around it in James’s livingroom and just record live with acoustic guitars then add a minimal number of overdubs. We’d have an album in a few weeks.

Well, dear reader, it didn’t work out exactly like that. James and I had a chance conversation with Gerry Callaghan one night. We’d met Gerry before when he recorded Love (As When) at Edinburgh College studio earlier in 2015. He’d done a great job then and we could tell he knew what he was doing. Gerry was looking for a project to develop and expand his own skill as a producer and engineer, working at his home studio. I felt I’d reached the limits of my skill in those areas and we were all happy to trust him with the project. So, we had a producer.

At home I produced guide tracks for the songs – voice, guitar and a click track for the time signature. One cold morning in early 2016 we assembled at James’s office at LGBT Youth Scotland in Leith to record the drum tracks. We could do all the other instruments at Gerry’s but needed a bigger space for the drums. Our friend John Farrell worked with Gerry to set the mics and we got 7 or 8 drum tracks down.

Over the rest of 2016 and into 2017 we would assemble in twos and threes at Gerry’s of an afternoon or evening to record guitars, keyboards, voices and percussion. Given that everyone had jobs, families, lives and other bands, it was never going to be quick. But we’d made the decision early on that there was no rush, no deadline and we’d take our time until we were happy with it. I’d often felt my own albums were compromised by haste and lack of attention to detail. Gerry was painstaking and gently demanding, always getting the best performance out of us, even it took many attempts. While there were days when I felt we’d never see the end of it, there were moments where magic leapt out of over-familiar, well-worked tracks. The first time I heard the huge backing vocals to Bamboo, like a choir; the time Suzy added triangle to Damn Grey, the guitar solos that were either first-take (Damn Grey) or something like 180th (End of Tears).

Soon the project expanded beyond the band. I wanted a ‘proper’ jazz guitar for Goodbye Song; Gerry knew Ged Brockie, who came in, listened once and in an hour or so delivered a fluid backing track and a choice of three solos. We decided we needed a better drum track for Bob Dylan and booked a day at the Sound Cafe in Penicuik where we managed all the parts from drums to vocals in one day with the help of engineer Ross Arthur. Phil Ramsay had jammed with us on trumpet at several gigs so we naturally asked him to join us on several songs.

By the middle of 2017 it was down to Gerry spending hours on the final edits and mix; I joined him a couple of nights a week but all the hard work over a couple of months was his. We listened to it on headphones, big speakers, small speakers, in the next room and in our cars. Gerry persuaded me that we owed it to all the hard work we’d done to master it properly. He recommended Skye Mastering in – wait for it – Skye. Dennis Blackham has been recording and mastering since the 1970s. You’ve heard a lot of the songs he’s mastered, from T Rex to Led Zeppelin and Eurythmics and even M’s classic Pop Muzik. One night we decided the album was complete. I set the running order of the songs and we packaged the lot off to Dennis. We got it back in a few days richer, more alive and more powerful.

Having moved so far beyond my former methods of doing absolutely everything myself, I had to extend that to the packaging. I came across photographer Philippe Monthoux through a Gumtree advert looking for musicians for his portfolio. We met one evening and took a walk to the Captain’s Bar where the manager, Pammy, an old friend of mine, was happy to let us do a session one morning before opening time. The results were some great shots for publicity and the album cover.

After a few abortive attempts at a sleeve design from designers on Fiverr, I discovered that Liz Jones, a singer I’d just met through drummer Suzy, was also a graphic designer. Liz worked through many iterations and came up with a design that I loved.

I now had 100 CDs made by cdduplicationpro.co.uk in Liz’s design. I promptly gave 50 of them to folk publicist Richard Penguin to send to his contacts in local radio, magazines and websites. That was successful in terms of airplay, if not for reviews. It certainly got to people who’d never have heard it otherwise. I also submitted to a number of music blogs via Submithub, but none of them took it up.

I’d been learning a bit about marketing myself and decided to offer a free download of the album to people interested enough to give me their email addresses. This was See You In Another Life, a 12-day walkthrough by email, text, audio and video of the highlights of the album. My aim here wasn’t to sell, obviously, but to start to build up some sort of friendly relationship with the people who like my music. It’s a small step, but one I’m glad I took. A couple of people have enjoyed it enough to buy the CD as well!

Next up is the launch gig at the Voodoo Rooms on March 22nd with The Mighty Sparrahawk, from Glasgow. We’ll be playing a return spot with them in Glasgow in April.

It’s been a long long road to get this out there, and it’s great to hear it on radio and find new listeners and friends. I hope you’ll be one!

Come and join us at the launch gig!