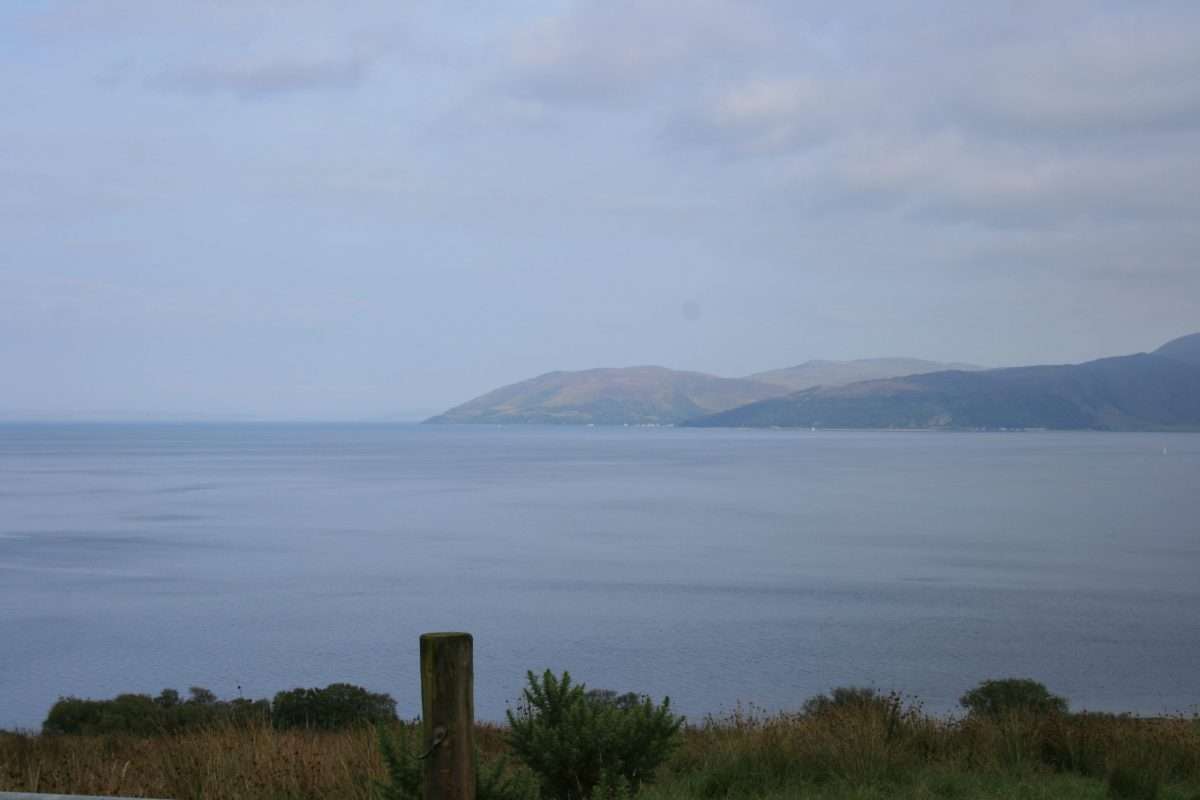 Last weekend was without doubt one of the most enjoyable musical experiences of my life. David Fee of Homesongs had arranged a series of four gigs for myself and Rosie Nimmo in the Kintyre peninsula. For him, this was a way of getting back to his first love – house concerts – after a long period of Homesongs being purely online. For us, it was a chance to meet new people, get our music to people who actually want to hear new original songs, and to see some of the most beautiful scenery the country has to offer.

The first gig was in Campbeltown on Friday night. I drove there on Friday afternoon, stopping in Inveraray for a bite to eat and a walk. The weather was glorious and the post-lockdown eagerness to holiday in the UK was giving the shops and pubs a new lease of life.

From there I drove to Campbeltown where David and his Dutch wife Ineke live in a large house that has previously been a community hospital and the Scottish Owl Centre. I’ve spoken to David many times online but it was great to meet him and Ineke in person, and hear of their experience of fostering children over many years. Rosie and her husband and bassist Tommy arrived soon afterwards. We were treated to a curry then people began to arrive for the first house concert, appropriately in David and Ineke’s house. By 7:30 there were about 15 people there and Rosie and Tommy started proceedings, with very light amplification so we could sing quietly where we wanted. After their set, the guests got the rest of the curry. I did a 40-minute set. It felt so different to be singing to people who weren’t chatting with their friends, or waiting to perform themselves – in other words, a listening audience.

At first it was a bit unnerving, to be honest, but it enabled me to play some of my more vulnerable songs like If I Could Be With You and Ten Objects. I could see they were having an emotional impact. I lightened the mood by doing Ballad of Bob Dylan and Green Lights All The Way joined by Rosie and Tommy. After playing I was delighted to sell some CDs and get some signups to my mailing list, then relaxed into a few glasses of wine and chat with David and Les Oman, another Campbeltown resident who’d been one of the first local radio presenters to play my material over ten years ago.

The next morning, Rosie, Tommy and I had a walk round Campbeltown then, in convoy with David we set off for Carradale where David had booked us slots at a Harbour Festival. Again the weather blest us, but we weren’t blest by the amplification the organisers had provided. We found the first performer, Chris Annetts, barely able to be heard. Fortunately Tommy had packed a PA, although we hadn’t needed it at David’s. He saved the day not only for us but for all the performers. Chris was able to complete his set audibly, and David followed. This time the audience weren’t there to hear us, so the feeling was different, but with a bit of chat and projection we were all able to get a few singing along. I was amazed as during my set a little boy walked in front of me with a bucket containing a large live crab, and – honestly before I’d thought about it – I’d said ‘It’s not like playing pubs in Edinburgh, you don’t get crabs there!’. At the end of my set a seal popped its head up in the harbour.

We said a fond goodbye to David and headed north up the east coast, along a single-track road, which was fortunately almost deserted. I stopped at one point to admire the view and enjoy the silence.

As evening fell we arrived in Clachan for the second gig, in The Outbuilding of Lori and Garreth’s cottage. Lori has a second job as a children’s party organiser and the Outbuilding is where she builds and deploys games. Like the Outbuilding , their garden is a magical space decorated with coloured tiles, plants, candles and a massive firepit. The Outhouse was packed for the performance – there’s a buzzing community in Clachan, and Lori’s events are a regular way of bringing people together. This time I kicked off the evening and Rosie and Tommy took the second set for their soft, jazzy and lyrically direct songs. By now we were getting to know each others’ songs and enjoying being in the audience rather than anxious about stepping up for our set. Again we both sold CDs and got signups, and we enjoyed meeting the people who’d come out for the gig. Lori had lit a bonfire in the firepit and later I sat there enjoying my own company and a glass of wine, rejoicing in the heat and smell of the fire.

Next morning, fortified by a great breakfast, we set off for the final gig in Tarbert, stopping for a walk at Seals Point, where there were no seals but the most exquisite silence. (I live near a motorway, so silence is not something I often experience.)

The Tarbert gig was at a cafe/bistro/glamping site called The Gather, where the manager, Corrin, could not have been more helpful and accommodating. We had a huge performance space and Tommy’s PA saw service again. We played in the afternoon, where some people were having lunch. A few had come specially to see us, some just to see live music, and some were taken by surprise but, as an audience they were warm and welcoming, and once again CDs changed hands – even vinyl in Rosie’s case – and email addresses were given. At 5, we said our goodbyes and headed home. The weather had been beautiful for the whole weekend and the drive home was just the same.

With all the exposure to people in close company I was quite concerned about COVID. As soon as I got home I took a test before even speaking to Madame L; it was negative, as was another a couple of days later. I hope our audiences were as fortunate.

The weekend was a delight, particularly because it gave me the willingness to perform in public again. I’d been doubtful of whether I would be able to do it, or even wanted to. But this was so far removed from the hustle for unpaid gigs and open mics in Edinburgh. It proved to me that there really is an audience for original songs, even original songs from a performer they haven’t heard before. David’s faith in the ethos of Homesongs was vindicated. I found the performer in me once again, and I even earned more than I have in the last six years of playing my music here!

I can’t thank David enough; also Rosie and Tommy for being great company and Lori and Corrin for hosting a magical weekend that gave me faith in my own music again.

And no, despite being dared to, I didn’t start the sets with Mull of Kintyre!

6 thoughts on “Mulling over Kintyre”